After spending the past five months exploring higher quality badger brushes, when Omega came out with their Evo line which many compared to a good silvertip badger, I had to bend my brush restraint to see for myself. Because of it's popularity, many places have trouble keeping them in stock and so I was fortunate to get one from a US vendor. I am very familiar with Omega, having a couple of different boar brushes from them and my one travel brush is their famous (and cheap) S-brush.

Upon arrival, the Evo appeared to be a SHD Silvertip brush. The specs are even close to a SHD Silvertip having a knot size of 28mm with a lot of 55mm. The fibers were finer than most of my other synth brushes, however because of packing and size of the knot, there was a lot of backbone.

I gave it a brief tryout tonight. I essentially went with getting just the tips wet and having a bowl of hot water on the side and loaded my brush to do a face lather. Perhaps it was because the brush was new and I did no prep (such as soaking the brush), the brush did take more effort to load. I found that I had to wet the tips a second time to finish loading the brush. Once loaded, it took some effort to build a face lather, but once done, it held enough lather for three passes.

I will let the brush settle for a couple of days and then try again, this time bowl lathering. From my initial impression, Oumo does not have to look over it's back any time soon, especially for a synthetic brush costing as much as the 26mm SHD Manchurian brush that they did not send me after a week. 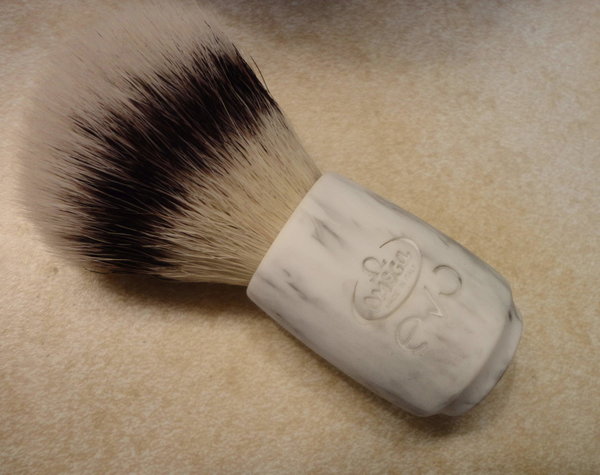 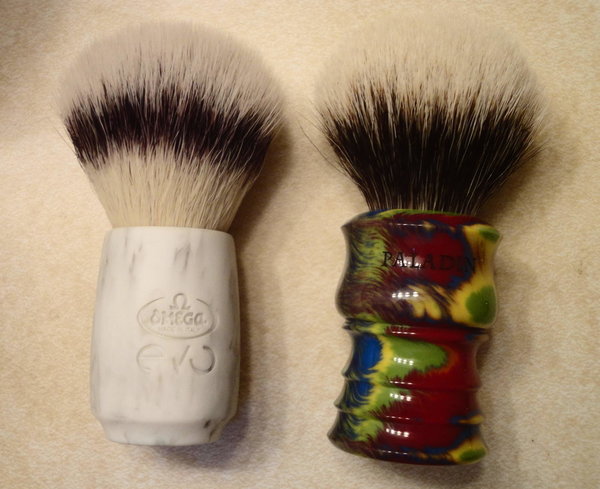 So I could not wait for a couple of days. One reason is because, as dense as the knot was, it dried completely overnight like all synths do. The other reason was that I really wanted to attempt a bowl lather with this brush. Tonight, I did manage to soak the brush and then squeeze the middle of the brush around the area of the dark band so that only the tips were wet. Loading the brush was easier tonight and it quickly built a rich lather in the bowl. When applying lather to my face, the feel was more like a very dense Manchurian without gel tips. Because this is a synth brush, I don't think the tips will soften over time. It did produce enough lather for three passes and at some point, water did collect at the base and started running down the handle like it does with most of my synths.

After bowl lathering with the Evo, I still have to say that Oumo does not have anything to worry about with this brush. In fact, some of my lower end synth knots have better face feel. Still, maybe more experience using this brush would help in finding out how to get this to work right.

I'm glad that some people go through the trouble of reviewing thoroughly their stuff, not so much for having a idea what to buy but more for knowing what to avoid buying