The OneBlade is a razor have a strong following where folks will swear that it is the best razor out there. There are also folks out there who never tired it but are as strong in their opinion against the razor who would rather shave with a dull kitchen knife before they get a OneBlade. Personally, I have shaved with a dull kitchen knife and can attest to the fact that I prefer a OneBlade.

Perhaps it was that when it was first introduced, they had the audacity to charge $300 for a mass produced razor with parts made in China which used only a certain type of blade, which they recommended changing the blade after every use. Since then there has been some changes, both good and bad. The good is that they now have three models ranging in price of less that $100 for the Core, $200 for the Hybrid, and $400 for the Genesis. It still takes only one type of blade, a Feather FHS, however they now say that one can get three to five shaves per blade.

All OneBlade razors comes with an articulating head and a floating blade (where it is allowed to move forward/back, side/side, and up/down which is supposed to give you a more comfortable shave. Personally I think it was to solve the problem they had in early versions where the tolerances were so close that it cause the blade to smile.

So tonight's shave was with my OneBlade Genesis, which was the second version of the original stainless steel OneBlade. I was fortunate enough to get it on eBay for less than half the cost of the original and I have been using despined Gem blades instead of the more expensive and harder to find Feather FHS blades. I usually get about 10 shaves with the Gem, which is worth the extra effort to modify the blade.

The shave is always consistent, comfortable, and totally brainless. No matter how much pressure or how sloppy my strokes are, I have never had a nick or weeper and always come out with a two pass plus touch up BBS. Tonight's shave was no different. 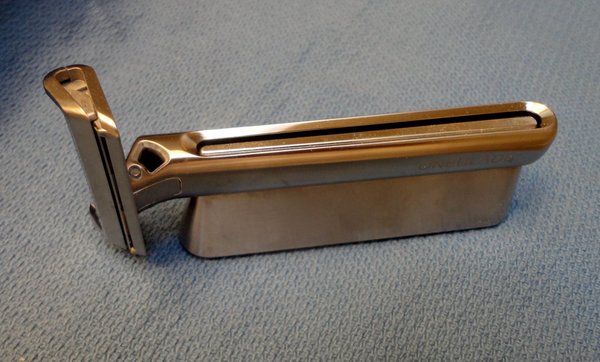 Moderator
SU-Patron Gold
Thank you for this review!

The things we do for science
Cheers!
Richard

As posted in the Signed, Sealed, Delivered thread, I took delivery today of a OneBlade Hybrid which I couldn't pass up because it was half price even though I did not need or desire it. I decided to take it for a shave tonight since I just shaved with my Genesis last night and wanted to see if it truly gave the shave of a Genesis at half the price (1/4 the price for me). The Hybrid is supposed to have the same head as the Genesis, with the handle of the Core. Earlier there was some confusion when a famous shave reviewer said that the heads were different. All that was different was that the Hybrid head had no markings or serial number on the bottom of the base.

I was surprised with the shave because I thought that it would be the same or very similar to the Genesis. It was comfortable and totally fool proof like the Genesis, however it was not as efficient. After the first pass, there was much more stubble left than with the Genesis. The weight of the two razors was close enough for this to not matter, however I later found out that the balance was slightly lower on the handle for the Hybrid. for the ATG pass, I employed a trick that I learned when I first got my Genesis which was to throw all learned technique out the window and just shave like I was a beginner, smashing the head into my skin and going over the same spot multiple times and just trying to rush my shave. Well, it worked and I got away with a two pass BBS with minimal touch up. Now I can start developing my own technique with the Hybrid.

For those that want to try a OneBlade but don't have $400 lying around, the Hybrid has all of the good shave qualities of the Genesis at half the price. For those that already own a Genesis, the Hybrid will not offer more (even at half price). 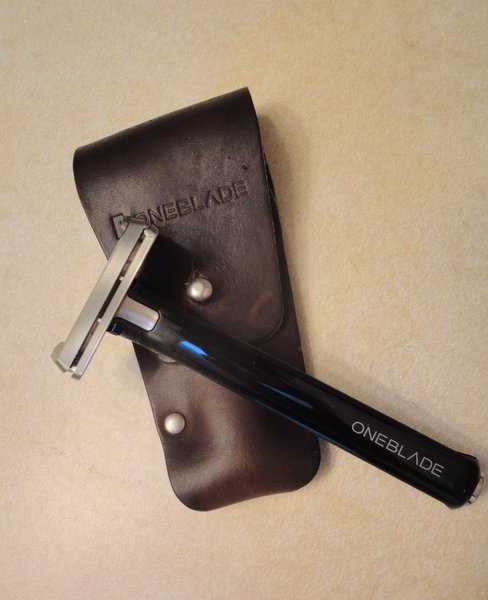 So I will now complete the OneBlade line by talking of the Core, which is their low end plastic version, which currently sells for $30. Around the holidays, they were discounting their entire line, and I was able to pick up a Core for $20. I purchased the Core originally when it first came out and returned it because it was too mild. Shortly after that (like two weeks), they announced a newer version which was more aggressive and so that was sent to me. It was a better shaver, but still a little mild, but it convinced me to save up or look for a used Genesis, which I did and have been happy with OneBlade ever since.

So recently on another shaving forum, a thread was once again posted about the Core and once again the folks that never tried a OneBlade takes up a lot of time telling why they will never try one. Because this was the Core, they could not use the excuse that it was $400 and made in China because the Core was $20 and made in the US. So they talked about using a FHS blade which gives only 3 shaves, even though the FHS blade actually lasted the longest in a Core (I have gotten 6-8 shaves). They started talking about maybe they will try it when OneBlade comes out with a version that takes a despined Gem blade (which they all do at this point in time).

Anyway, shortly after that, the state imposed their social distancing rule on us and I was not able to go to the gym and so I had a lot of time to get bored and so I pulled out my Hybrid and shoved in a regular Gem blade, and noticed that the blade latches on each side of the slot prevented the Gem blade from being fully inserted: 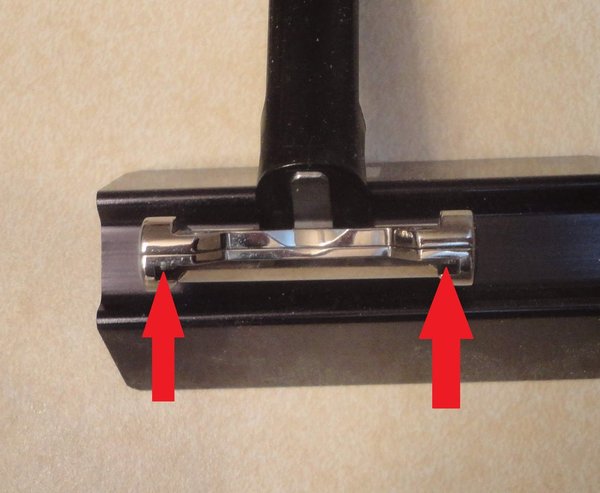 I thought about unscrewing the top and taking out my Dremel, but instead I was still sensible enough to decide to experiment on a $20 plastic version than a $200 stainless steel version. So I used a dull Gem blade and diamond nail file and got rid of the latches and the Gem blade went in easily: 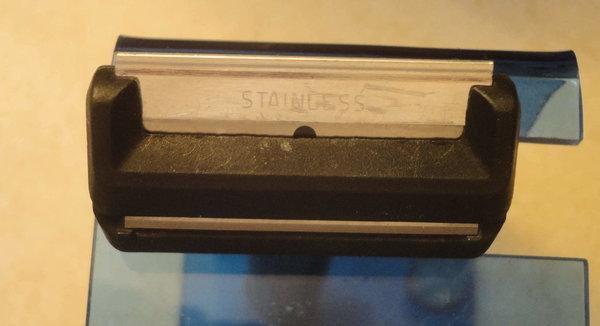 I tried shaving with it and it was very mild, milder than the original Core, which was the mildest of the three OneBlade razors. The original Core was close to a three pass shaver, and this modified version was closer to a four pass shaver. Luckily the design of the razor allowed me to apply a lot of pressure on the head and to continuously buff without any irritation or weepers afterwards.

The next thing I did was to make a shim using a magnetic advertisement card cut so that it would end close to the cutting edge so the blade would be lifted by the front blade support behind the guard: 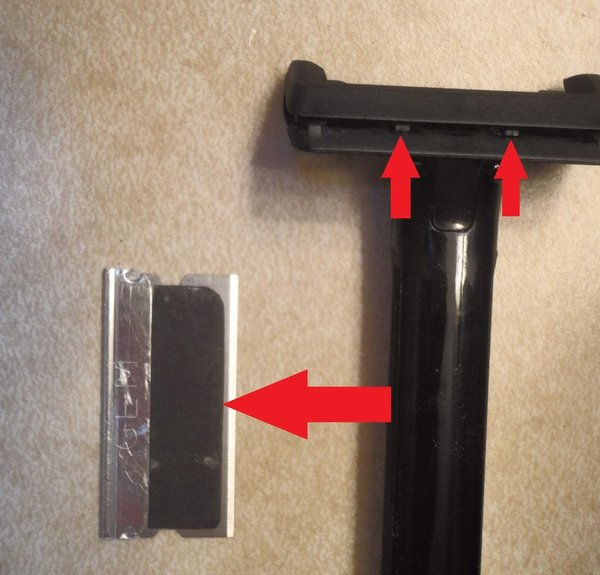 I have been using it for two shaves now and it shaves closer to the original Genesis. It shaves a little rougher, but just as efficient, and adding pressure and buffing does not create irritation or weepers. Next I try it with a new blade.