PB setting a bevel near the toe

As I had no more razors to try DILUCOT, I have dulled a UNICOT razor and try to set a bevel on a milky slurry with my La Veinette. I could easily set the bevel all along the edge except near the toe (about 5mm long area) 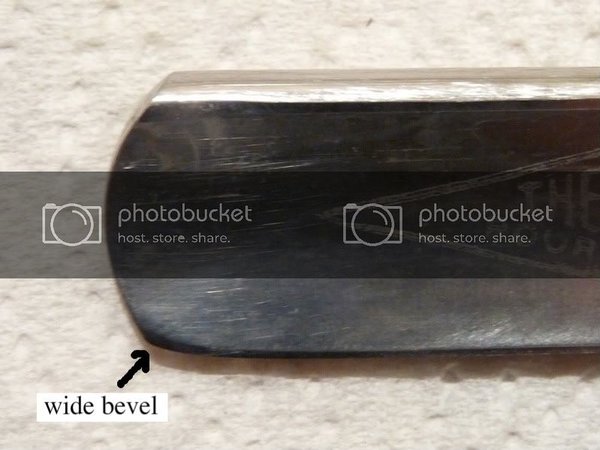 I have tried many times but all what I have succeeded in was to widen and round the bevel near the toe.
Then I continued DILUCOT and got quite good results, need some further refinement but quite there...

But what a pity this s..... razor doesn't cut hairs near the toe.

Is there some techniques to solve this problem (I have tried rolling strokes, swaying strokes)?

Have you tried using the marker test? Basically, you get a permanent marker, like a Sharpie, and mark the bevel (and the spine if you desire, which would help you if you needed to figure out if you have an uneven spine or are raising the spine while honing). This would help you to figure out what you're not doing quite right with your rolling strokes.

Have you tried some circles and the slight rolling motion?

I haven't thought to try it but will try

So I will also try to make good

The picture clearly shows that you've exaggerated your rolling stroke a bit.
If you keep doing that, the bevel and spine wear will become much wider near the tip than at the rest of the edge.
It's not efficient either, because your stroke passes to rapidly over the part that needs to be sharpened, only to remove steel beyond that point.

As for a remedy, you can't put steel back on, but you can sharpen the tip. Simply predull the tip only (on glass) and work with localized halfstrokes on the tip part of the blade. Put a finger on that part, near the edge. (You have already more spine wear than bevel width, that why I advice to place the finger nearer to the edge). It wont take long before you've set the bevel near the tip as well. There's on very important matter to realize: the first possible good bevel is only a bit further down in the steel. There is never any need to visually reduce the width of the blade, to reach that good bevel, unless you were honing past a chip, or working out a frown. Neither are the case right here. If you start reducing the blade without reaching a stage where you can shave arm hair, then STOP to realize that something is wrong. A wobbly stroke or way too dense slurry are the most likely culprits in that case.

I have tried some very little circles aimed at the toe area (cf
Please, Log in or Register to view URLs content!
) but don't know if I master this technique, or if big circles are needed.

I can't reply as quick as you all give me advices

First of all as the toe area was not able to cut arm airs, I have tried to make half X-strokes localized on the toe area and put my index near the toe but in the middle of the blade (between edge and spine), then I think I have exagereted my rolling half X-strokes (because the first ones seemed to be unefficient) but as you say it doesn't work, then I have lso tried little circles... when I realized that the bevel was growing I decided to look for some help .

I will try to do half X_strokes with finger near the edge in the toe area after predulling the tip (first cm of the blade?).

That depends on the area you need to recover. Take that area + 1 additional cm for goo measure.
Carefully observe how the fluid inf front of the edge makes contact and let that guide you who to make the strokes. If the slurry starts running up, you know you're working that part of the edge.

The thing about circles - to me - is that it gets the entire bevel and uniformly. It will also remove a linear scratch pattern (if you've been using an x-stroke or something like it). So, you get uniformity and you can also see what the new scratch pattern is replacing. Don't be bashful - use whatever size circle seems to work best.

Also, are you sure that the blade or the spine isn't slightly warped?

As said from me on putting your finger on the blade on the toe end, and doing half strokes until you have set the bevel, from there is just a normal Dilucot, paying a little extra time on the toe to make sure it keeps up