I have taken evenings to hone 1 razor, starting with breadknifing to remove a chip in the middle of the edge, then it took forever to get it shaving arm hair, this work took 2 evenings and when I checked the edge at 60X, it looked like a map of the Alps!
2 strokes over glass and it looked good but still took another evening to complete! next morning I get all set up for the test shave, and it is as rough on my face as anything I ever used! hht is good, 60X is good! go figure??
Its still on the shelf now where I threw... err I meant carefully placed it for another time....lol

Could you elaborate a bit about it, Ralfy?

Grind of the razor? Was it previously restored? Polished on buffing wheels?
How did the edge look under magnification after the test shave?

Let's get to the bottom of this.

I have breadknifed quite a lot of razors now, and here's what I do after I breadknifed all nicks out of the blade:

- Tape the spine, please;
- Wet sandpaper of about 300 grit (make sure it is wet though lol), do a couple of fast strokes 5 times on each side;
- Only stop doing this when you pass the TPT test, if you don't you will spend many hours wasting time just to get it there;
- Now, perhaps this is hard on the razor, I don't know, but really, keep going untill you pass the TPT on the entire blade, this is the key, the entire blade;
- Once you've done that (this goes very fast, should not take many strokes really) you take out your best friend, coticule, and build the slurry, and then follow the usual path down towards that perfect edge.

Of course, not all coticules are the same I guess, but this works very well for me. I don't use a microscope though, but I use a lot of patience :sneaky: My coticule has pink lines running in it, not sure why, but it seems it's hard because of them? Perhaps someone will once be able to tell me.
J

Oh yes, and also, I believe it was also Bart who said this but: If you're honing for 1 hour with slurry, don't expect to be removing all the rest of the scratches with water in 10 minutes... because that's when it will feel rough, it will shave, but feel bad on the face. At least that's what happened to me so far.

Ok its a Hamburg ring "Try Me" Hollow by metropol, good chip under the letter "R" in try me, only hand polished, then worked on 1200 diamond plate to breadknife the chip out, and same plate to form bevel, coti/slurry to arm hair shave then 30 laps with a thinner slurry X2 hht = violin, onto bbw light slurry about 100 laps light pressure hht= better violin, back to coti with water for a final 100 laps hht= still not catch and pop but you know when it wants too but cant quite?, 60 on linen 100 on leather, tpt Mmm nice and sticky, hht still violin!!
shaves leg hair great (bald arms) and 60x looks smooth, soooo....

That's not good. If it was mine, here's what I would do:

1 stroke on glass.
Slurry till shaving arm hair again (would not be more than a few minutes work, if the bevel was ok in the first event)

Check the edge with magnification, it must be completely smooth, no teeth, no chips.
(If not, please report back)

20 X-strokes on the same thin slurry.
(Don't do more strokes here. That secondary bevel may not grow too wide)

50 X-strokes on water. Don't rinse the hone every 20 laps, it's bollocks. That trace of contamination is your friend, but do keep the flow going.

HHT with a hair as described in the HHT article. Violin is not good enough. It is acceptable that need to fumble a bit to make it pop.

HHT again. The hair must sever without any problem. It will, trust me.
Otherwise, please let me know...

I'm going to give this a try also
R

One of the major causes of microchipping is over honing. My friend Sham told me once, and I believe this to be absolutly true, the blade will only give you so much and that is it. After that you are just wasting metal.
Try doing less strokes and see what happens, you might totally suprise yourself!

The official stand on this website is that "overhoning" does not exist.B)

Maybe some hones can cause microchips. Those hones suck.

Your friend Sham is correct that each given hone has its physical limit in how finely it can define the intersection between both bevel panes. At that point, it just removes steel, without further keenness gain. That notion itself defeats the "overhoning" hoax. You can hone a razor into oblivion on a Coticule (an I believe on any other hone as well) without ever encounter something like "overhoning".


I just typed a long explanation about overhoning, how I never experienced it, while I have honed many razors doing many laps on a variety of hones: Coticules, BBWs Choseras, DMTs, Nakayamas and lapping film. Halfway typing the post, I took a break to have diner. When I finally posted the message, something went wrong, and I lost all the text. (It has happened before, but Firefox' back button always saved my butt. Unfortunately not this time.) I'm too fed up right now to completely reformulate my original response. Let's suffice to say that I consider "overhoning" to be a hoax that originates at StraightRazorPlace. There really was a collective "overhoning" fear 2 years ago on SRP. It seems a bit better nowadays.

Concerning Ralfy's problem: after rebuilding an entire bevel, I hardly ever get a stable first edge. I always attributed that to minor issues with the temper at the apex of the blade, caused by the buffing wheels (no matter how often I plunge the blade to keep it cool). That's why I asked Ralfy about the restore job on the razor. Another possibility is that the agressive procedure of breadknifing and quickly recutting a bevel with pressure and aggressive hones, causes stresses in the steel that may not be removed enough by the later honing stages of the first honing job.

I also pointed out that the Unicot method, if done right, reveals the aforementioned keenness limit for the Coticule in use. I have never surpassed (albeit matched) the keenness of the Unicot procedure with any other method that finishes on a Coticule. With other honing tools I have, but the shaves were harsh to my skin.
G

When i first started out honing i had this fear of over honing the only time i have experianced this is when i have a bang on edge but then i look through my 30k loop and i have spotted tiny micro chips all i do is rehone thats it.

I agree about the aggressive nature of my breadknifing, I raise the spine so the blade is at about 45* and work both sides, then I sit it straight up @ 90* and saw away, thats gotta stress that blade. I just did an old Clover Four, man that tiny blade is sooo thin, it scared me to work that back!!
I think part of my problem is obvious lack of experience, also every single blade I have honed has been an old one thats needed reshaping to some degree, and lack of proper equipment to do the reshape, shit I use cheap diamond plates and I mean cheap 3 for less than 10 GBP.
That said I did hone my Dovo after Sir Bart did it. (Sorry My Friend I caught it on the plug chain shaving...Doh!" and that shaves beautifully.
I think until I can get a cracking combi like the one posted in the other thread I might have to go back to wet/dry paper for cutting back, thats what I did my first few on and the shave very nicely, what do you think guys?

Check the edge with magnification,
it must be completely smooth, no teeth, no chips.....
Smooth.....Check!
No Teeth....Check!
No Chips.....Check!
I am amazed! and I dont get amazed!!

Tape..... Check
20 X-strokes on the same thin slurry.... Check (well tbh I did have to wet slurry again cause i stopped for smoke)
50 X-strokes on water. Don't rinse the hone every 20 laps, it's bollocks (thats bang on Brit slang btw)....Check
HHT with a hair as described in the HHT article. Violin is not good enough. It is acceptable that need to fumble a bit to make it pop...... Fumble..catch..pop...check

Check with magnification....its all pink with shiney lines no no wait thats my finger! o.k .... its Good Sir Bart! nice narrow 2nd bevel smooth no teeth no chips!
Gleaming!!

HHT again. The hair must sever without any problem. It will, trust me.
Otherwise, please let me know....Check....catch..pop apart from the very toe
Seems so much better for not much work at all
Thank You Sir Bart you are a Master

Check with magnification..... check looks like it did before only 2nd bevel is smoother with no teeth or chips, the whole edge looks a little smoother

Here it is btw, slightly smiling and I am really rather fond, dont know why?
But I think She is such a pretty thing, and hopefully a good shaver now, with Sir Barts Help. 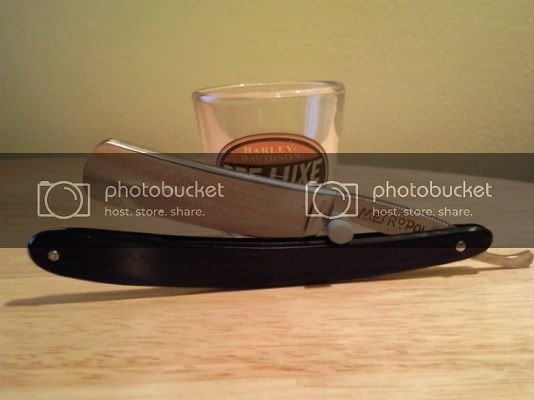 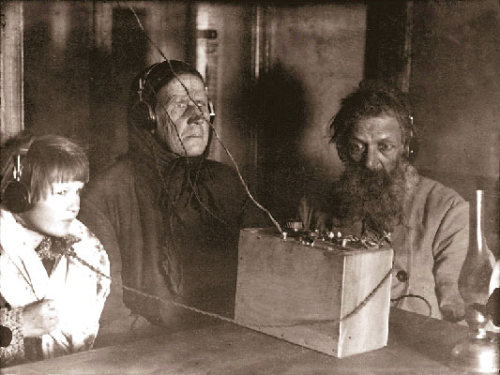 Anyway I shaved with it today, and the results were very impressive :thumbup:
I cant think of any improvements it was very smooth and sharp.

Why is this? lets see, I think I worked the edge too much before, i.e. too many laps after tape, and the stress of bread knifing left unseen damage just into the steel at the bevel (if that makes sense)
What I did what basically a quick rehone, and its very sweet for it, Thank You Sir Bart.

What do you guys think?

I also think that at the same time, your edge was not keen enough. I believe this to be true, because micro-serrations don't reveal themselves by a lack of shaving performance. Quite the contrary: they can make an edge appear sharper than it is keen. It's only after the shave that you notice the damage it does to the skin.
On the other hand, lack of sharpness reveals itself by pulling and the razor seemingly demanding more pressure to shave well. (In the end this may cause skin irritation as well)
The HHT markers are given for a smooth edge. They mean something completely different at an edge that carries micro-teeth. (Try passing the HHT off your 1200 grit diamond hone, you'll be amazed how easily it goes). Hence, if your edge wasn't smooth, the HHT was pretty meaningless anyway.

One of the reasons I keep being baffled about Coticule whetstones, is that they not only leave such great smooth edges after finishing on water, but at the same time are capable of delivering trouble-free and perfect bevels. It seems that your freshly cut edge required some more slurry honing, before it was ready to take delicate keenness.

Keep up the good work, Ralfy.:thumbup: