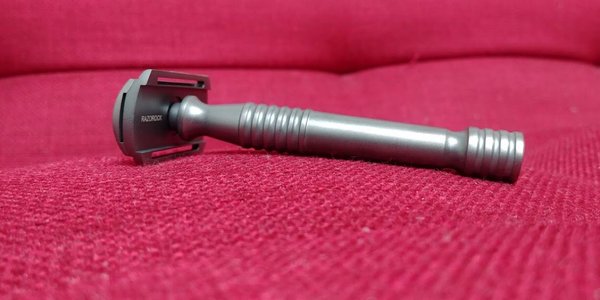 The aluminium version has a lot of positive reviews only the weight borders some users.

I'm going to show my strength and not buy it!
Practice for a Long Long Time and All Is Coming

The razor was definitely light. I immediately swapped out the handle with something heavier and it was easier to handle. It was definitely a great shaver for the money, however I am not sure if more money and stainless steel will translate to a better shaver.

Still, if I happen to be browsing the IB web site sometime on Tuesday and if they happen to have some in stock and it happens to be at a good price, and if I happen to harvest enough tomatoes and kale for the week..........
U

And you can control your buy finger, everything should be fine.

I join you Snuffie I don't buy it ...........but maybe that's also because I already have the original in my house.

Well, at least we now know the cost - $90. He did say previously that only 100 will be made. We just need to know what time on Tuesday it will be released. While it is a good price, I think it will sell out in minutes. Just as well for me to wait for my Paradign pre sale to arrive (eventually).

at the rate new razors are coming out you would be eating watered down soep all year round. Lets face it you can't buy everything, besides no matter how good a razor is it's not a day - night difference in the way they shave. Our grandfathers has one (1) razor they used their whole life.
Practice for a Long Long Time and All Is Coming
U

The same goes for soap, but that doesn't stop people from buying every new soap that comes on the market. There are persons on this form that have 200+ soaps so why shouldn’t you expand your razor collection.

All ready sold out.

As I understand it, only manufacturing 100 pieces and selling them out within seconds.................they really do everything to copy the original!

Well, I don't know if they decided to make another 100 razors or if what they sold in August was on the first batch and not the full 100. I was able to get one when they quietly said they were in stock again. This time, it was in stock for a couple of days. I know this because I kept on checking to see if they sold out so I would have an excuse not to get one, but unfortunately after the fourth day, I decided that one of the DLC coated SS Lupo had my name on it.

My Lupo arrived today, and I took out my original Lupo to compare it with. Both appeared the same except for the material and the finish. 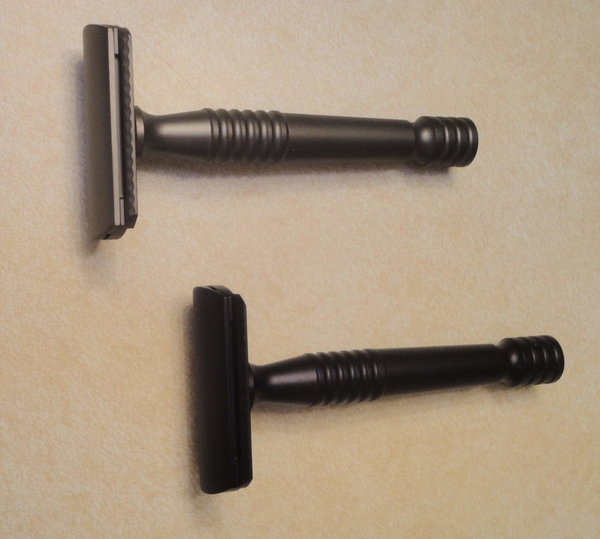 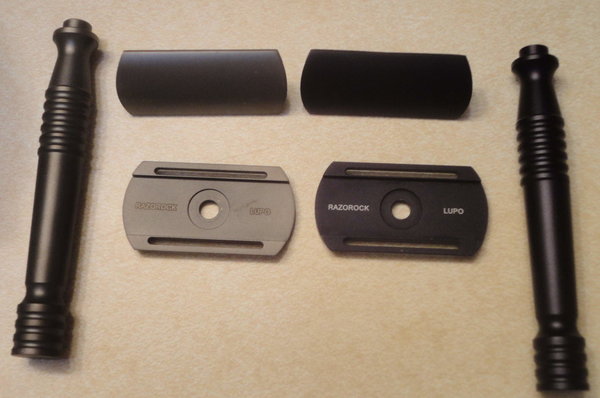 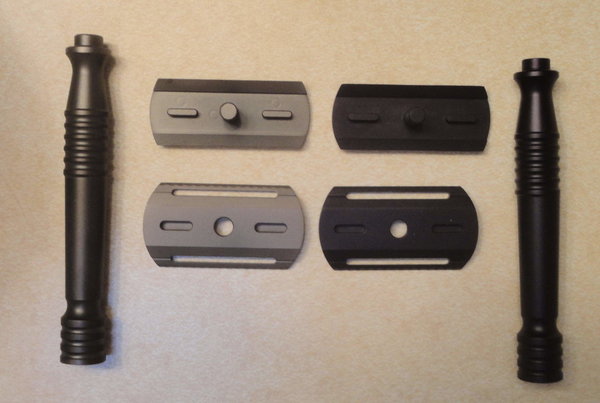 In anticipation of the arrival of the SS Lupo, I shaved with the original last night to familiarize myself with the shave once again. I also used the same blade for tonight's shave with the SS Lupo. The additional weight of the razor significantly changed the shave, and the extra weight was welcomed. I had to ride the base a little more with the SS Lupo and I found it a little more efficient in my passes, although it still was a very mild shave. Similar to the original Lupo, the SS Lupo just did not fall in the same league as the Mamba 70 or the GC 84 in the way of smoothness and efficiency. Then again, my Wolfman WR2 1.15 barely keeps up with the Mamba and GC.

Last week I received as part of a trade, a Wolfman WR1 .61 OC razor head. I believe that the original RR Lupo was cloned from the WR1 .61 as it's shave characteristics was on the mild side, but still efficient if you took your time. Assuming that the blade gap of the Lupo was .61, I thought that perhaps an open comb would make it more efficient. Tonight I tried out the WR1 head.

Comparing it with the DLC Lupo, I found that the design was similar, but slightly different. The Lupo had curved sides that fully covered the blade, while the WR1 sides are straight and allow the blade tabs to stick out. Also, the blade guides are slightly different in shape and so the head parts are not interchangeable. I did notice that the cap of the original aluminum Lupo does fit the base plate of the WR1.

Workmanship of the WR1 is totally top notch as one would expect from Wolfman. I took pics comparing the WR1 with the DLC Lupo. The handle for the WR1 is an aftermarket titanium handle from a Russian eBay seller as I could not afford a real Wolfman handle. 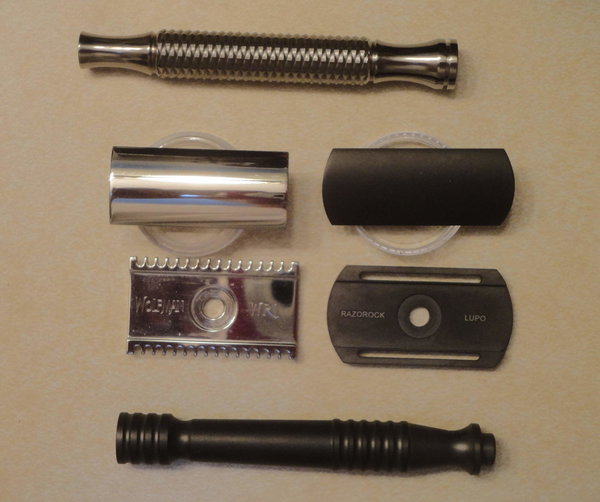 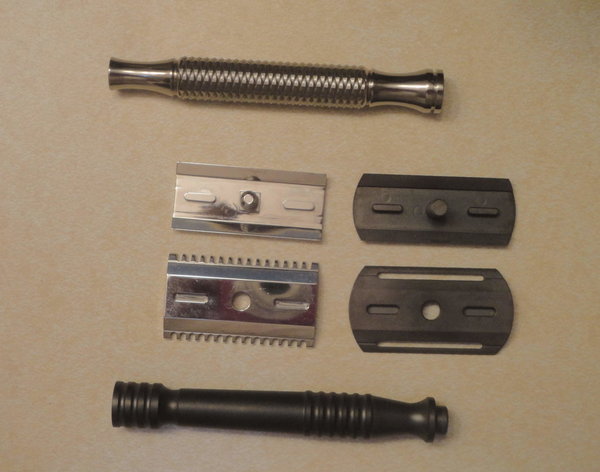 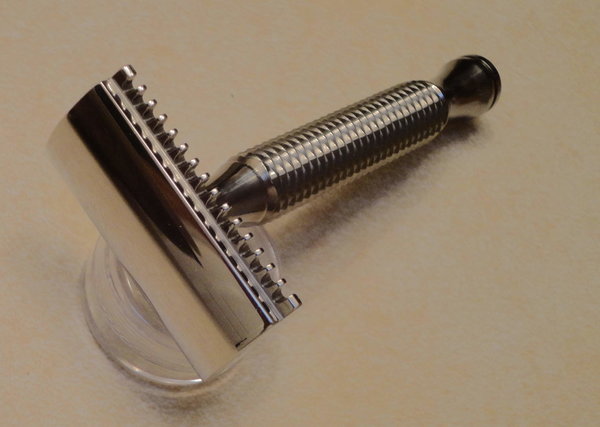 The shave went well and was more efficient than the DLC Lupo while maintaining it's mild characteristics. This was a definite improvement over the Lupo and put the shave closer to that of the Mamba 70, but still not quite as efficient.

I had a chance to shave with the latest version of the Lupo series. The razor was just recently released and it is being called the SS Lupo, even though the DLC coated Lupo was also made of stainless steel. Price was significantly lower than the DLC Lupo (by about $20), and the razor looked cleaner and came with a choice of different handles. Because the Super Knurl handle was not available with the head I wanted, I had to settle for the short HD handle. This time around, there is a choice of base plates, a SB .72, SB .95, and a DC with the OC side being .72 and the SB side being .95

I decided to go with the .95 version plate as I thought that the .72 plate would be close to the original Lupo aluminum and DLC versions, which felt closer to the original WR1 .61. 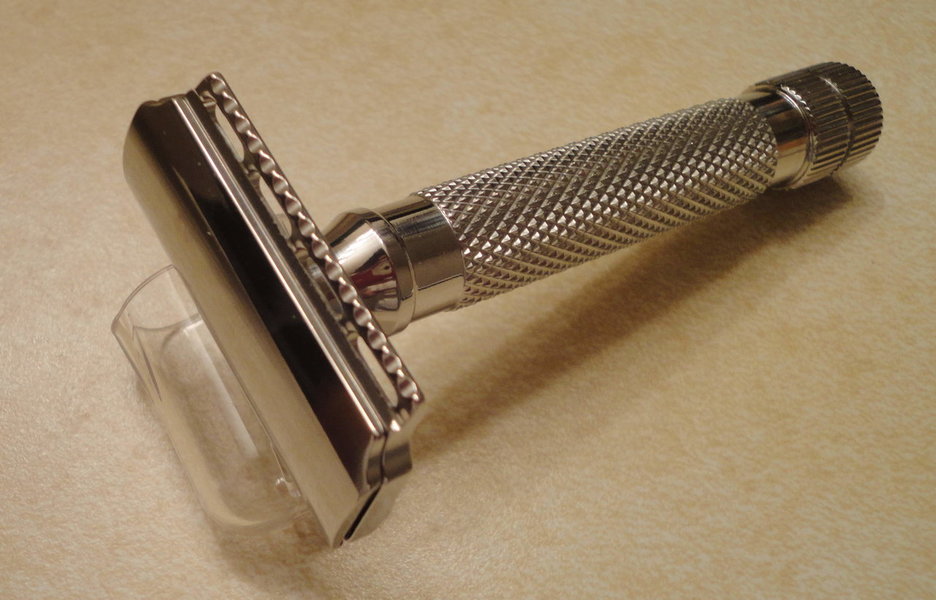 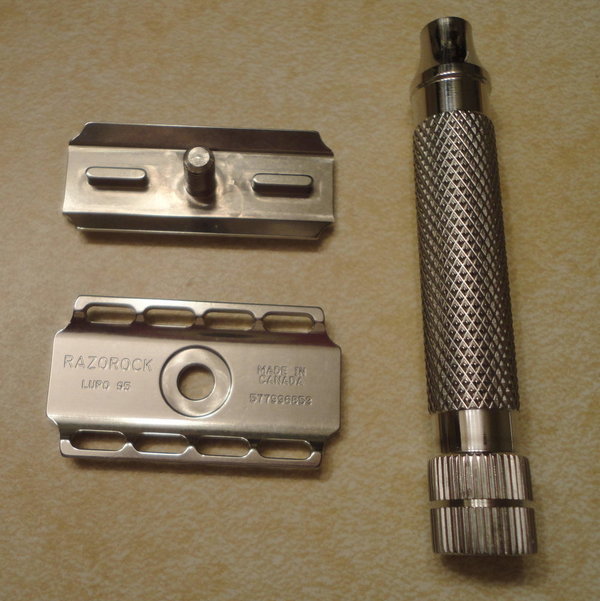 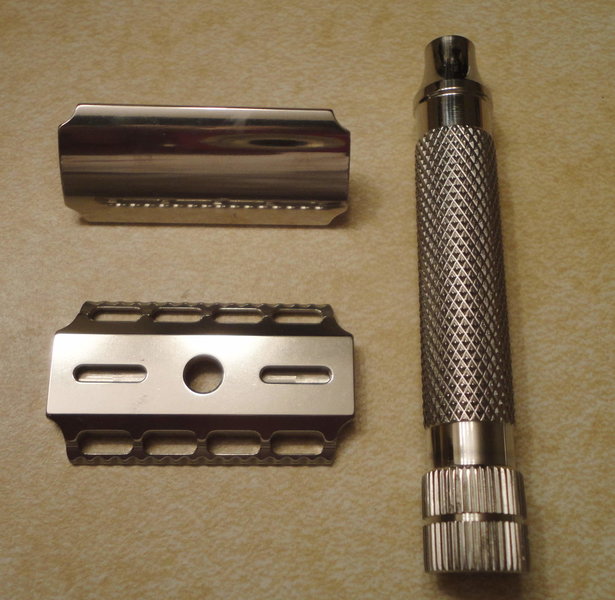 Many folks that are familiar with the different gaps of the WR1 razors believe that the WR1 SB does not become efficient until the gap exceeds .80. Based on that, I got the .95 plate. As with the earlier Lupo models, the SS Lupo extended the ends of the head to cover the blade tabs, however, unlike the original Lupo, the center area was flat and not curved. The center area was also thicker (even thicker than the WR1).

I used a relatively new blade, one that had about two shaves on it. WTG pass was very efficient, but did require me to be careful with the angle as it could get very comfortable to very rough real quickly. ATG pass was very smooth and went comfortably. In the end, there was just minimal touch up to get a two pass BBS.

Is the picture distorted or does the handle really have such a large diameter?

The handle is 13mm in the middle which is normal for the RR handles. It may look larger because the bottom part is 14mm. Also, the handle is the shortest of the RR handles at 82mm. Kind of like me and my friend at the gym, we are both 165 pounds, but he is 6 feet 2 inches tall and I am 5 feet 7 inches and so I look fat standing next to him.
You must log in or register to reply here.
Share:
Facebook Twitter Reddit Pinterest Tumblr WhatsApp Email Share Link
Menu
Log in
Register
Install the app
Top