"Gut rasiert - gut gelaunt" (Well shaved - in a good mood) was the slogan of Roth Bücher GmbH in Berlin Tempelhof i.a. in 1960. Razor blades of the "Rotbart" brand were market leaders at the time. Since 1913, Rotbart blades have been produced by Tempelhofer "Roth Büchner GmbH" but also some razors. The company was taken over by Gillette in 1926.

Here are mine Rotbart Mond Extra 15 and the aluminium derivate that shaves a very bit milder. However. great razors. 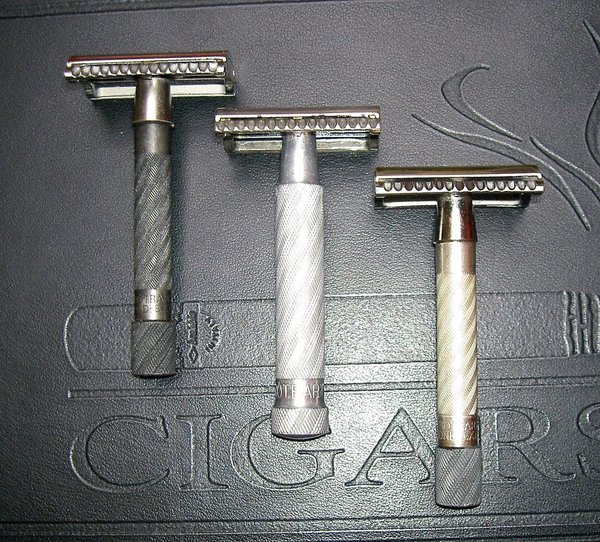 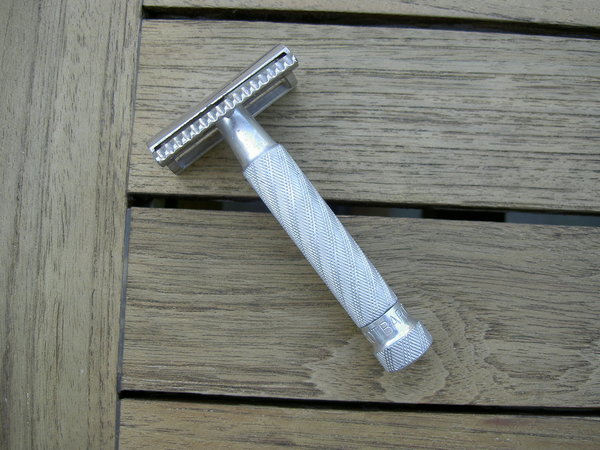 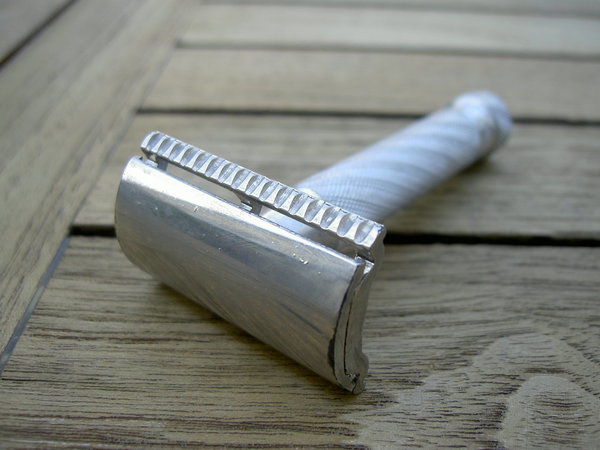 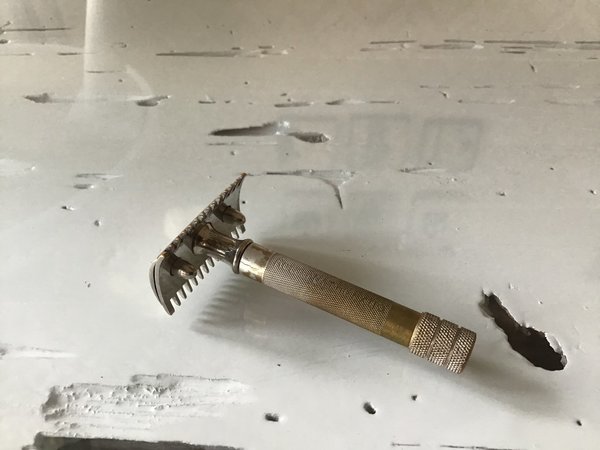 I don't know if he connects to this in terms of type, but I have an open comb version.

Still one of my best shaving OC safety razors

To my horror I see when I take the picture that the handle at the top is tearing.

Moderator
SU-Patron Gold
Got Rotbart too. Plastic twopart, my wives' favorite. Got a cased one too, not photographed yet. 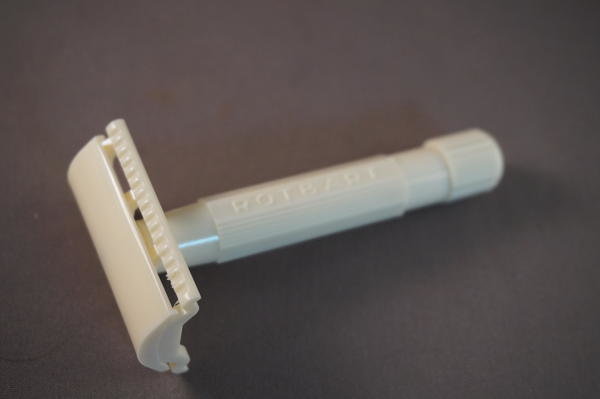 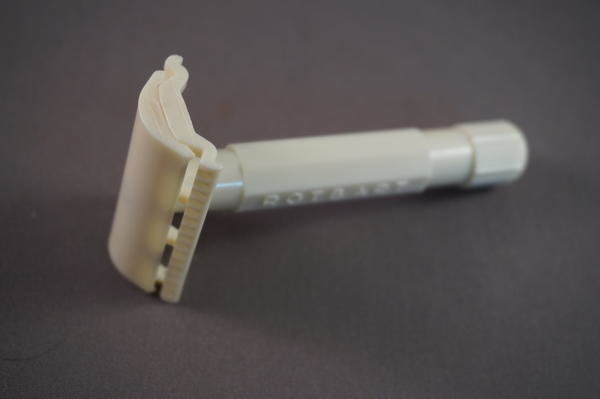 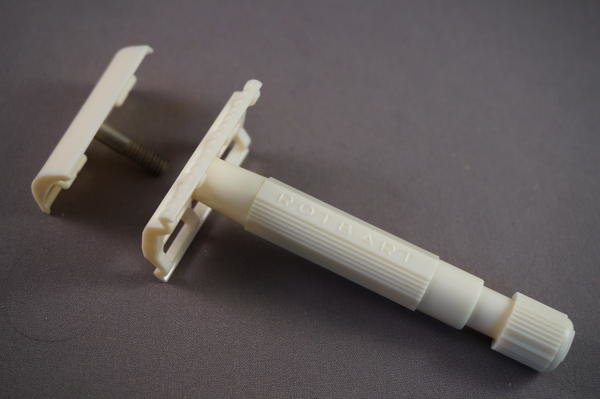 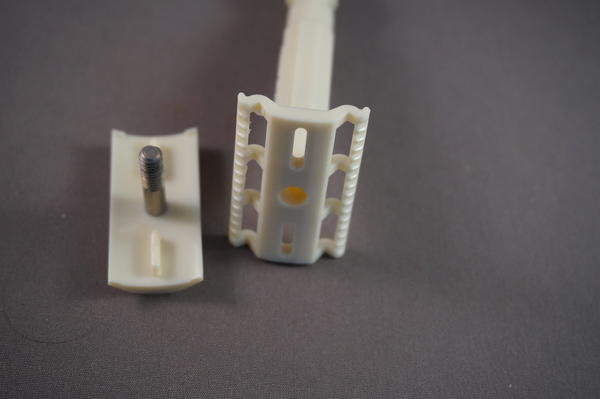 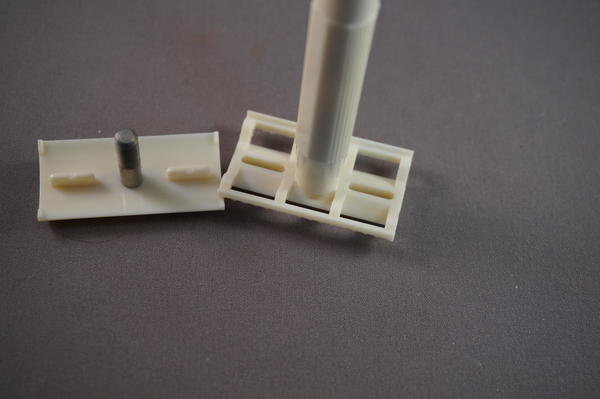 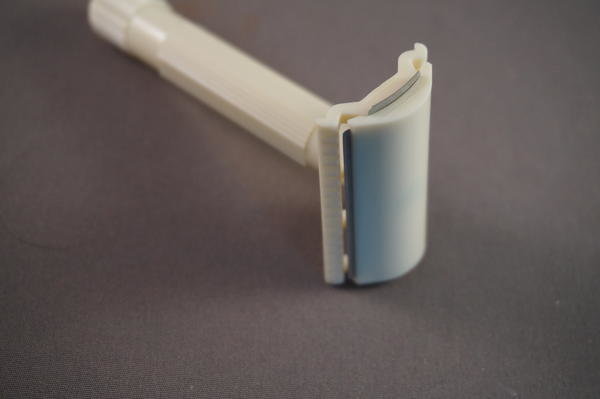 A couple of my Rotbart razors to keep this thread moving along. 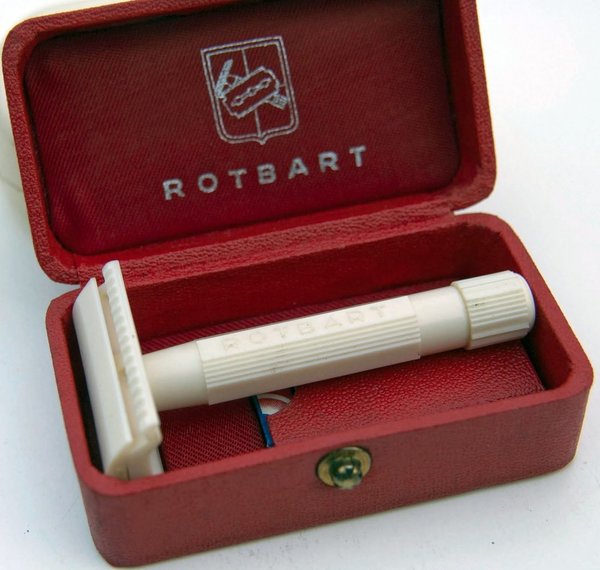 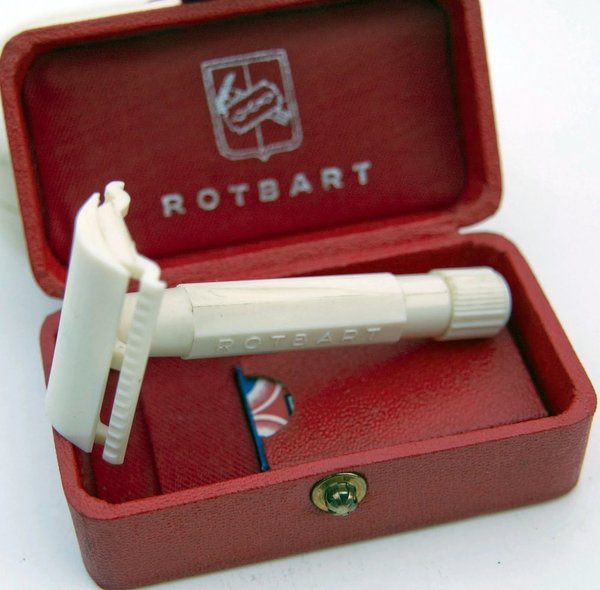 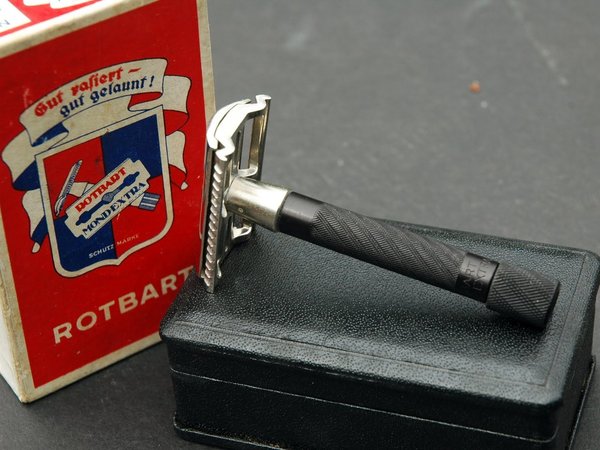 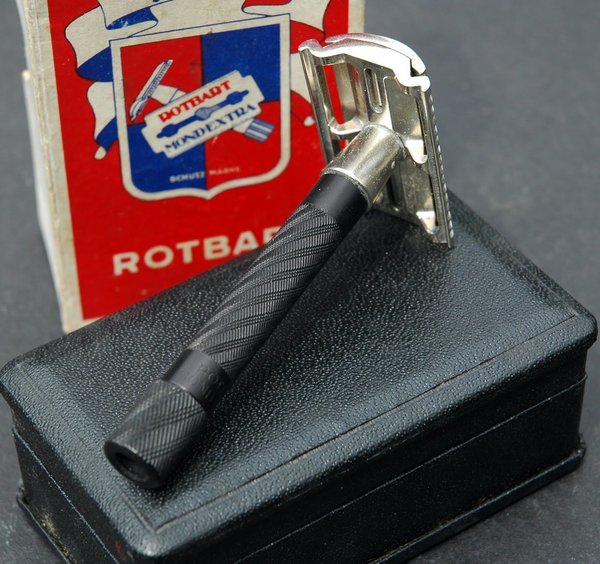 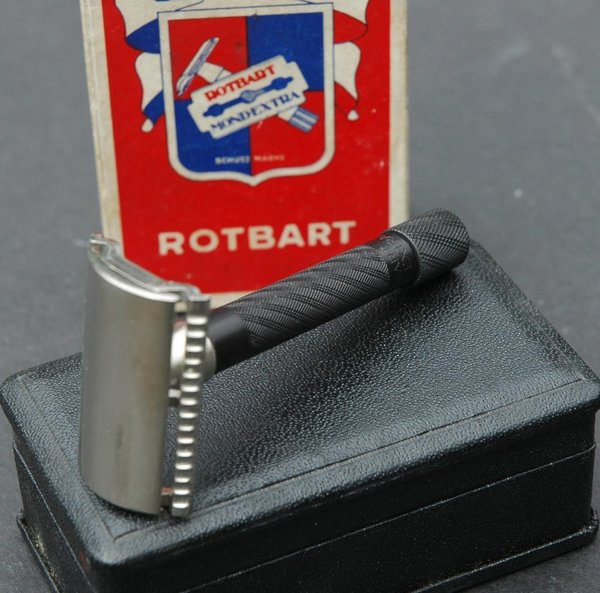 Moderator
SU-Patron Gold
I've seen these blackhandled Rotbart before, but always thought the handle was oxidized. I only now ralize this is how they should be.
Cheers!
Richard

Yes, the black handles are made with some sort of either black nickel or anodizing process/material on what seem to be aluminum handles.

Can any of you Rotbart experts help me with the identity of this Rotbart. I knew Rotbart produced a version of the famous Gillette RFB, but their version was a SC and not LC. I completely put it out of mind because I never seen one listed anywhere. One showed up tonight in a BST listing from a different forum and I quickly pulled the trigger. Afterwards, I decided to research it a little further and found that this was different from the Rotbart RFB that is displayed by most. This one is a three piece with a cap, base plate and handle, while most other Rotbarts were those with the handle attached to the base plate with a screw sleeve. Also, this one has a barber pole style handle similar to many shown above.

any information will be appreciated, as I don't know what I have (besides it being a three piece Rotbart RFB short comb). I will submit picture I took myself when the razor arrives. 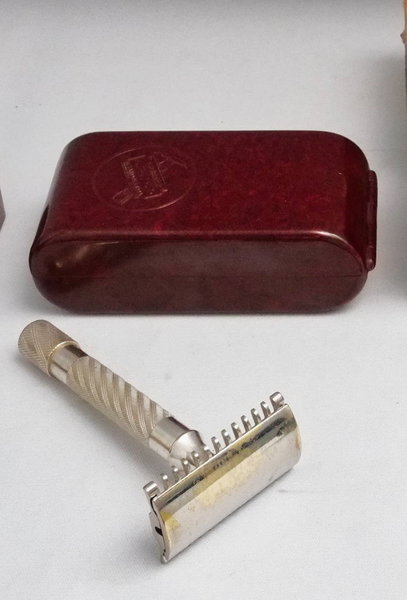 And just to see how cool their early ads were... 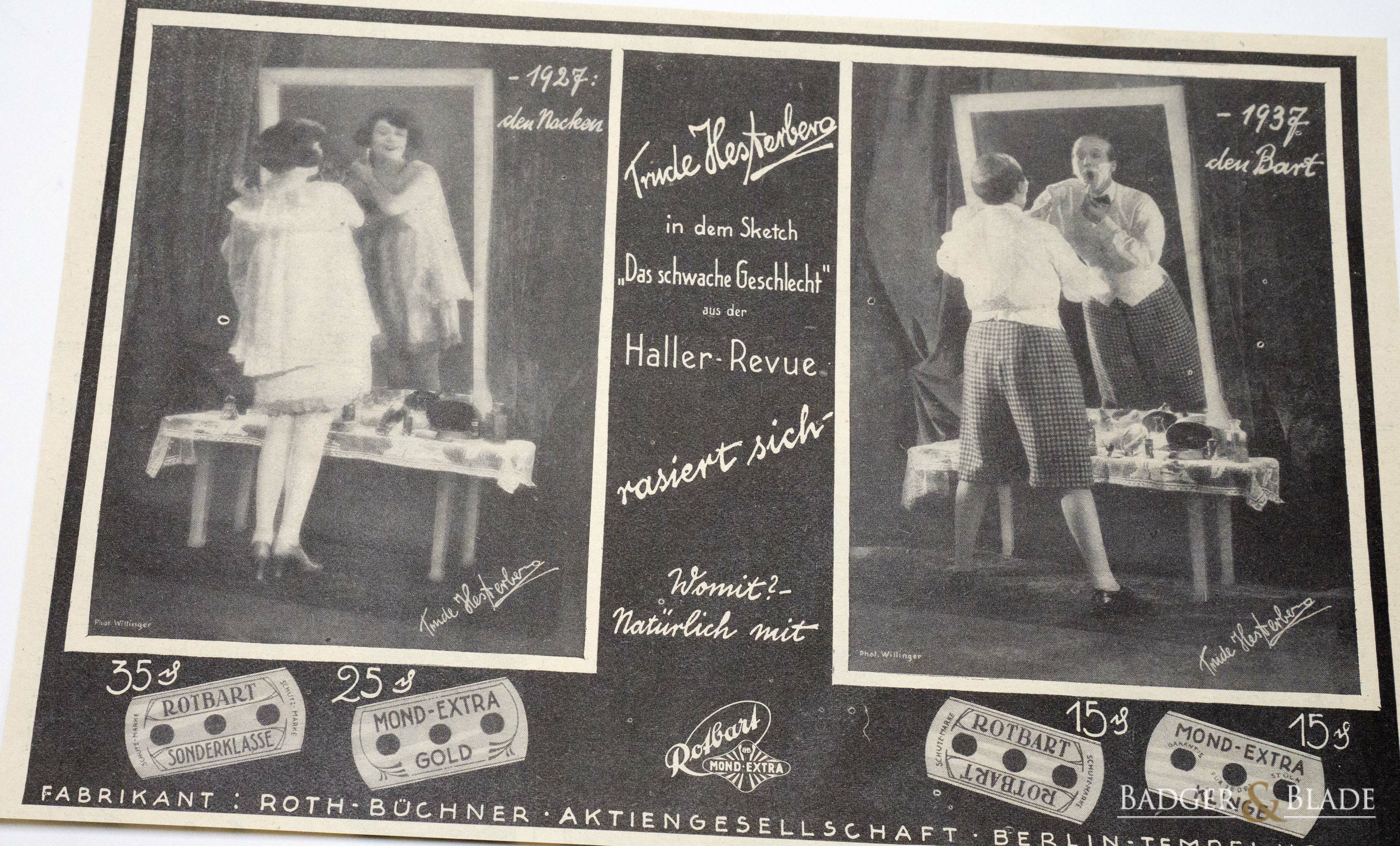 Reminds me of the "gas station pinup calendars"!

Now why would someone be shaving on the back porch while a pretty girl is sunning herself on a chair?

I'm working on a history of the Rotbart razor company -- up until the outbreak of WWII. I had some editing help from Richard, and if any of you discover other errors -- factual or other -- please let me know. There are about 10-15 more pages to this story, and ultimately I'll post the story somewhere in its entirety. But for now -- here's the Rotbart story, part 1.

During WWI, German soldiers began to transition from straight edge razors to double edged razors and blades. As a result, during and after the Great War, German men became a major market for razors and razor blades. Following WWI, the German razor blade industry gained increased momentum and developed into a major competitor for Gillette. Gillette’s marketing strategy had been to sell inexpensive razors and relatively pricey blades, whereas German companies produced high quality blades in large quantities, and sold them at relatively low prices so they could supply the entire European market.

The story of Otto Roth and the Rotbart brand is somewhat circuitous and uniquely German. Hugo Buchner had started his razor blade production in 1907 in Berlin. The Büchner factory had originally been a mechanical workshop, but eventually grew into a factory for machines and other devices. Hugo Büchner produced razor blades at this factory, beginning in 1907, first using the “Luna” brand, later “Mond-Extra”.

Otto Roth started his company in 1913 under the name Roth & Linder G.m.b.H. (the equivalent of an American L.L.C.) Prior to this time, Roth was employed as chief engineer for Hugo Büchner. During the WWI (1914 to 1918), Otto Roth’s practical and well-made razor blades became quite successful, especially among the younger German soldiers. The company began to dominate the German market with its razor and blade products. In 1918 Roth changed the company into the Otto Roth G.m.b.H., and then in the year 1921, by conversion, into an Aktiengesellschaft or A.G., (the equivalent of an American P.L.C.), which created an even more favorable structure for the business.

In 1919 – Otto Roth registered the Rotbart trademark. Otto Roth’s surname, Roth, is pronounced in German almost the same as the word “rot” which is German for the word “red”. Rotbart means “red beard”, which might have been a good shaving brand name on its own. However Red Beard, or in Italian “Barbarossa” was also the nickname of the German Holy Roman Emperor Frederick I, the red-bearded hero, a symbol of German unity, which probably was the reason why the brand name Rotbart was such a perfect choice for razors and blades made for the German market. 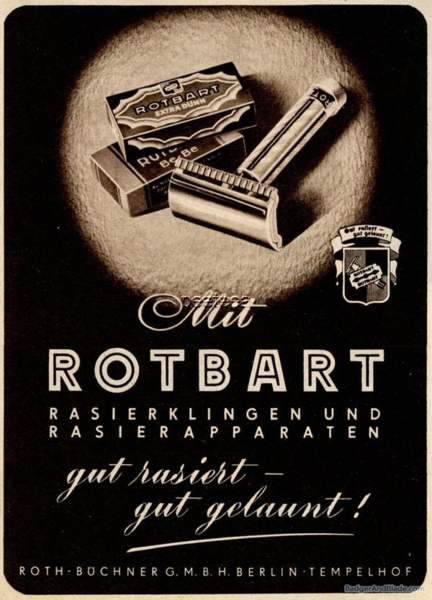 Beautiful text that reads very pleasantly and nice to be able to witness a book in the making.

My second hobby next to shaving is the WW1 and it's true again that in this war a lot of inventions have been made.......many very bad but in the field of medicine for example and so in our hobby of shaving also very good.

I wish you good luck with the development of the history of Rotbart.

Red Beard is also this guy, which is the main character in a three hour Japanese movie of the same name, and later became a TV series in Japan. You don't wan to meet up with this guy in a dark alley. 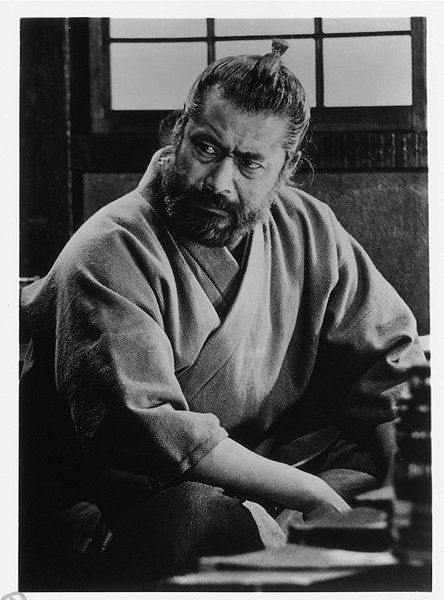 Ahh, Toshiro-san -- the great Doctor Red Beard. Thanks for introducing him and the movie here. It is a great movie, and although Mifune didn't shave for this movie, he likely used those great Japanese straight edged razors for his smoother roles.

My Rotbart RFB arrived yesterday and immediately got lost at the USPS after it was delivered to me and there was no one to sign for it (and I was at home waiting for the door bell to ring). Today, when I went down to pick it up, it took them a half hour to find it. Still, it is finally here. No surprises, but the mystery still is present. This is definitely a Rotbart razor and an RFB SC model, and definitely a three piece as opposed to one with the handle attached to the base plate with a sleeve screwing in the top cap. The handle appears to be brass and is very light because it is hollow, and that barber pole pattern from the common WWII Rotbarts is present on this handle.

@Northstonehill, welcome to our Universe, and any insights you have on this version of my Rotbart will be greatly appreciated. 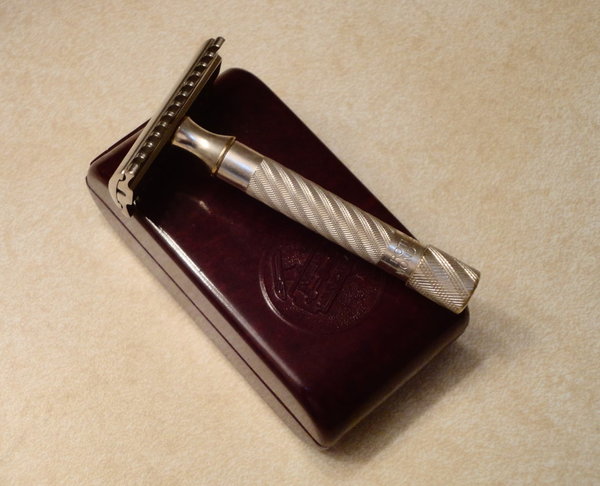 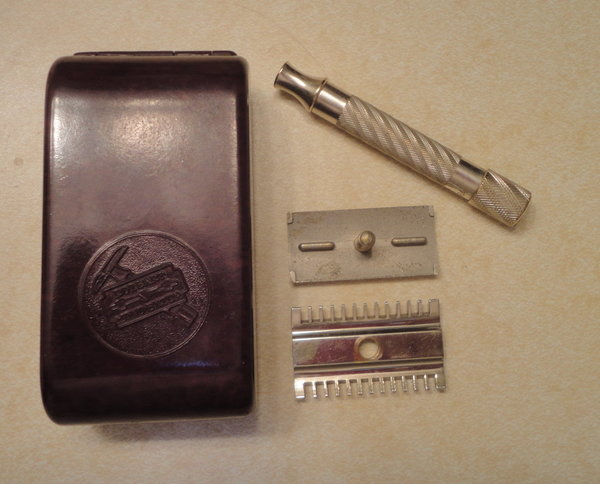 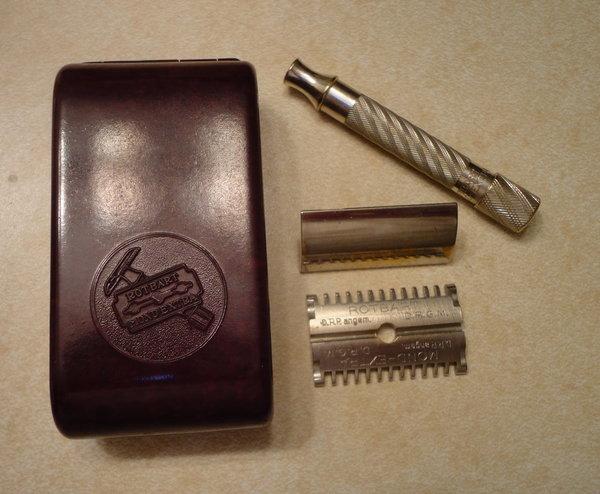 What a great read, thanks Jake! And thanks for the warm welcome @gvw! - Sadly I don’t have any further info on the Rotbarts razors other than the fact that I really like my well worn Rotbart Mond-Extra!

The repeated expansions and relocations of the production centers of Roth's company are indications of the rapid growth of the Otto Roth A.G. Eventually, in 1925, Roth took over his main rival Büchner-Werke A. G., and through this merger, ended his main competitive rivalry. Their widely renowned and high-quality products were jointly distributed under the brand "Rotbart/Mond-Extra".

As a result of this growth of Otto Roth’s shaving products’ business, in 1926 Gillette (although they had already established a relatively strong presence in Germany) purchased a controlling interest in Roth-Büchner, one of it's most successful competitors. At this time, Roth-Büchner produced highly recognized products, and was producing over 250 private label brands of double edged razor blades and razors. Principal among these were its own Rotbart, Rothbart, Minors, and Luxuosa brands. Roth-Büchner Aktiengesellschaft was headquartered in Berlin, and had been there since the merger of Otto Roth and Hugo Büchner, in 1925.
When Gillette purchased controlling interest in Roth-Büchner, Otto Roth was named the General Director for all of Gillette's European interests, and maintained his offices in Berlin, while managing several razor and blade factories throughout Europe. 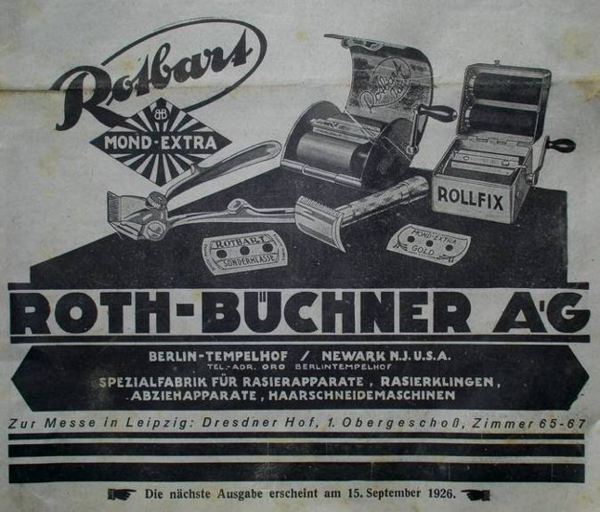 This advertisement was printed after Gillette bought an interest in Roth-Buchner, in 1926. Note that the ad features a razor of the Gillette New Improved style, and has the Newark, New Jersey location listed.

Establishing a plant in the United States was considered a risky proposition; but, in 1926, Gillette opened a small Roth-Buchner branch at 11 - 15 East Runyon Street in Newark; New Jersey. This, the same location that was originally leased by King Gillette, in 1905, for his brother Mott, and a mechanical engineer named Leach King. Mott was in charge of razor case design, while Leach was designing and building machinery for the Boston, Canadian, and new European factories. It was to Leach, that Gillette, in 1907, desiring to offer for sale a more compact "pocket edition" razor, sent the legendary Italian bracelet, which inspired Leach's designs for the future American Button Company Pocket Edition sets.

The following year, 1927, Gillette ventured further towards gaining full control of it's competition, by purchasing Otto Roth, a subsidiary of Roth- Buchner, which had not been included in the original purchase. The Otto Roth subsidiary produced the Gentleman Otto razor, and the Royal Crown (1928), and Cosmopolitan (1929), blades. By 1927, razor blade production at Roth Buchner had achieved the volume of one million blades daily.

Moderator
SU-Patron Gold
Stuff I did not know. The enormous range of brands: 250! produced by Roth, nor did I know they also opened a factory in the US.
Cheers!
Richard

Ok, guess I need to post this peculiar find here. Yes this is a Rotbart, but probably not one you’ve seen before... I only found out it was a Rotbart when I cleaned it. 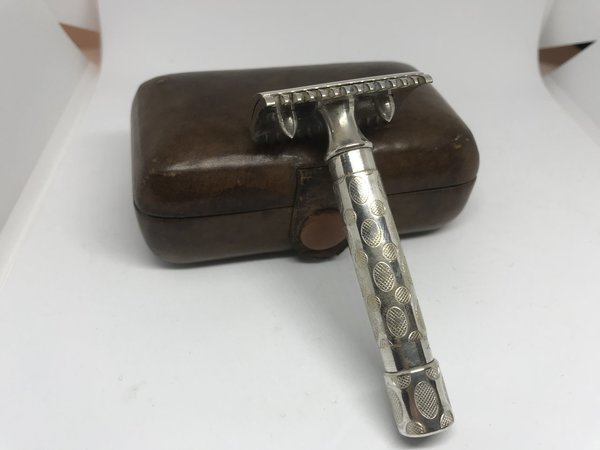 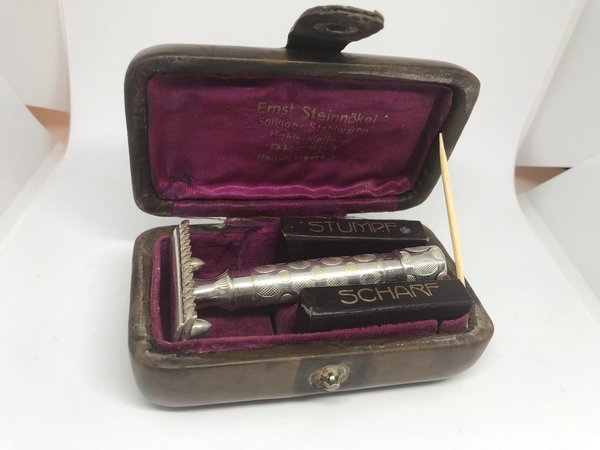 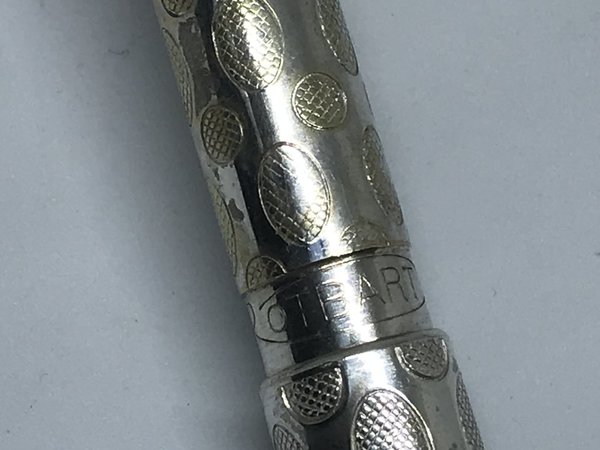 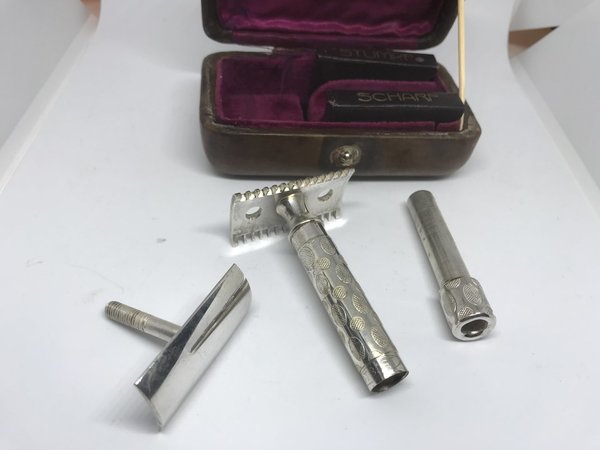 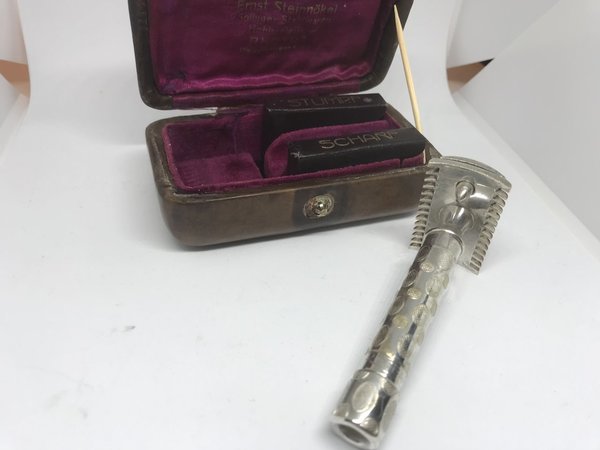