Beginners are asking themselves, which blade to try. Well, the question is very easy to answer on the one hand, on the other hand not so easy to make a recommendation. When asked "which one should I try", the answer is simple: "anyone you can get", otherwise you might miss your later favorite blade. The question for a recommendation is much more difficult to answer, as nothing is as subjective as the feeling of a certain blade, especially since not every blade in every razor shaves the same. If a blade in one razor may shave fantastically gently and thoroughly, it can spoil the fun of shaving in another.

Inspired by and as homage to "Eugen Neter" and his "Kleine Klingenkunde" in a German Forum I would like to give a guide to blade testing to beginners, based on my collected notes from the first 5-6 years of my "DE-Razor-career”:

To the Razors: I tested all blades with the Mühle R89 and/or the identical Edwin Jagger and the Merkur Progress. Where enough blades were available, the blade went through almost all my existing razors at that time (Merkur Progress, R89, R41, Ibsen Slant, Globus CC, Rotbart Mond Extra 15, Gillette Adjustables, Romi Slant, Giesen + Forsthoff CC, Gillette Tech and a few others) which is then noted at the respective blade. There were also blades, which were - if possible - used up in terms of tool life, but I did not have the need to test them in other razors as well. I found that a blade that did not work in Progress and/or R89 was rarely useable in other planes.

Please take into account that my personal preference has changed over time. For example, in the beginning, I appreciated the Personna Platinum (Red) very much because of its softness and I probably used 50 blades of it. I still feel them softly, but not the most thorough (compared to other blades) and more than 3 shaves were not possible. On the other hand, the Feather gave me very smooth shaves in the beginning, but always at the price of a more aggressive shave with some irritations and I find it very dependent on the razor. So e.g. with the time earlier "favorite blades" have moved quite down, because others simply offer me more. I just want the ideal combination of very sharp (because hard beard), very gentle, very thorough and no irritations after shaving. The lifetime (how many shaves a blade holds) has never been the most important thing to me, but in my opinion, for blades with similar characteristics, the lifetime was only one shave longer, so that this blade is listed before the one with the shorter lifetime.

The following list is just a guide. I think, if you order Blade-sampler at the beginning - which I would always recommend to every beginner, instead of ordering 100 blades of one kind directly on suspicion - and in which sampler blades from the first 2-3 following leaves are included, I think the chances are very high that your later favorite blade is also included. But I certainly don't rule out that you will like the blades that I find further down (e.g. the ultra-sharp Feather that other people like so much) much better than I do: As I said, nothing is as subjective about shaving as the blade and as ever YMMV 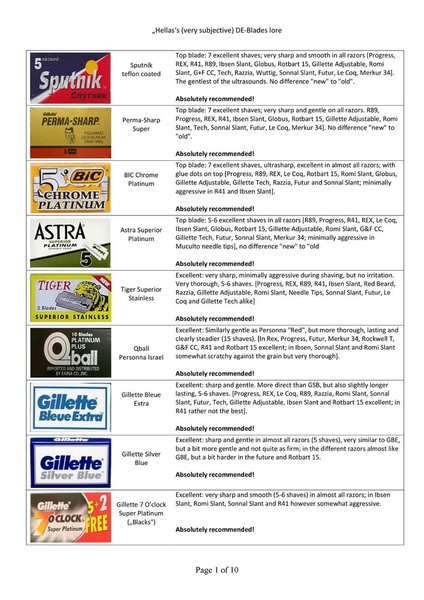 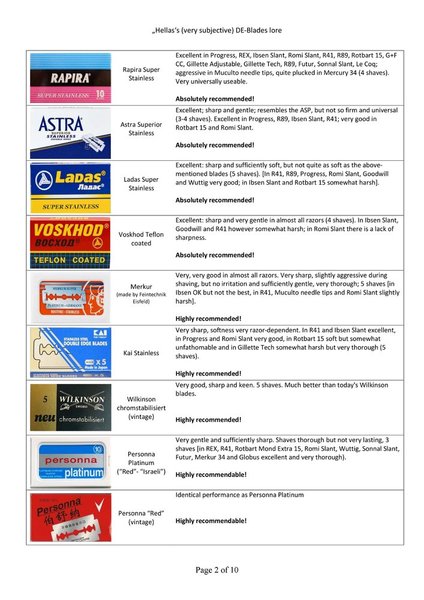 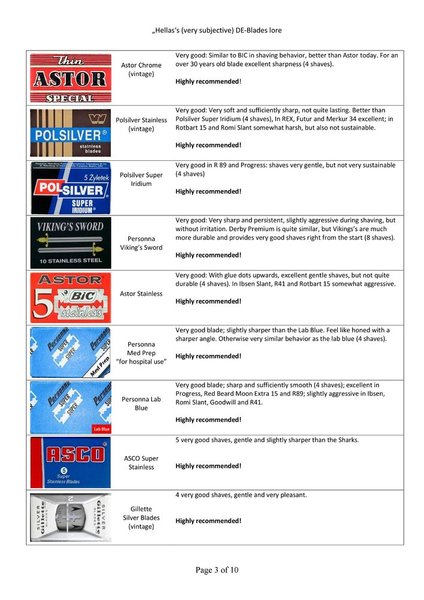 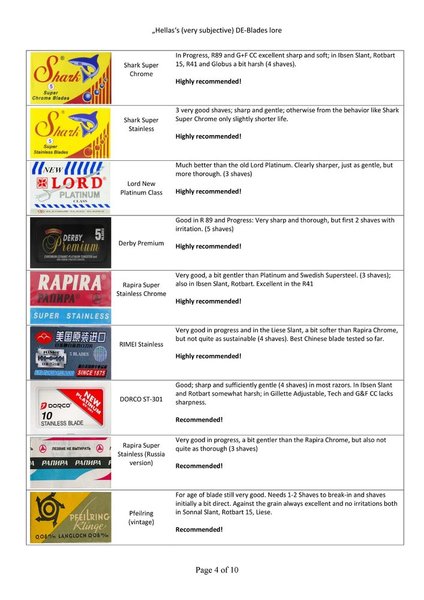 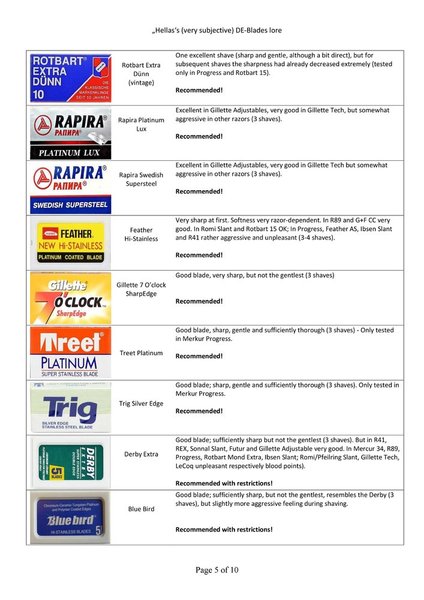 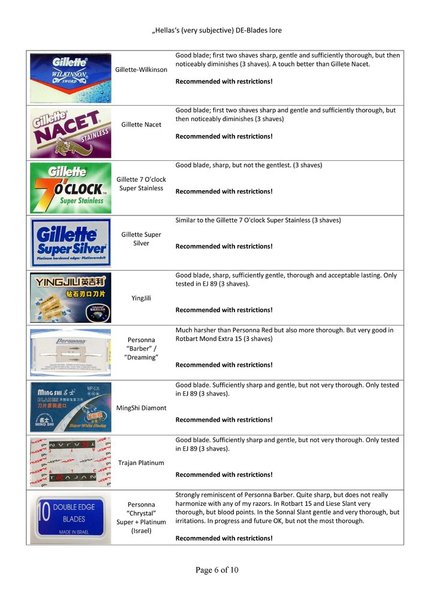 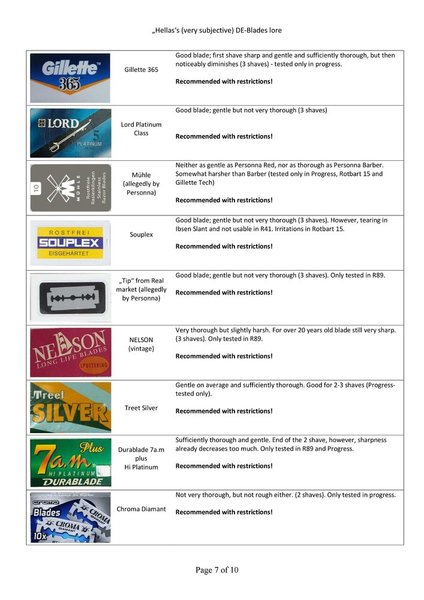 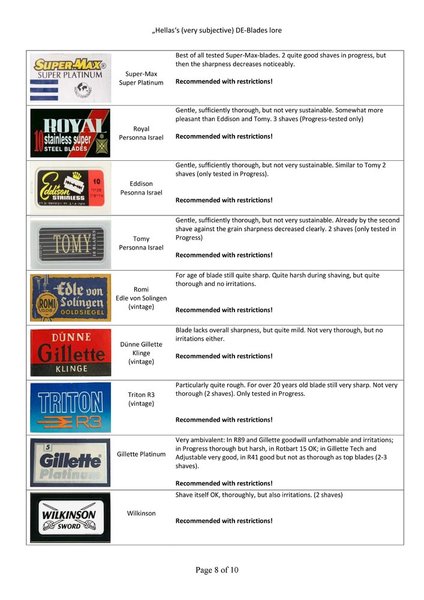 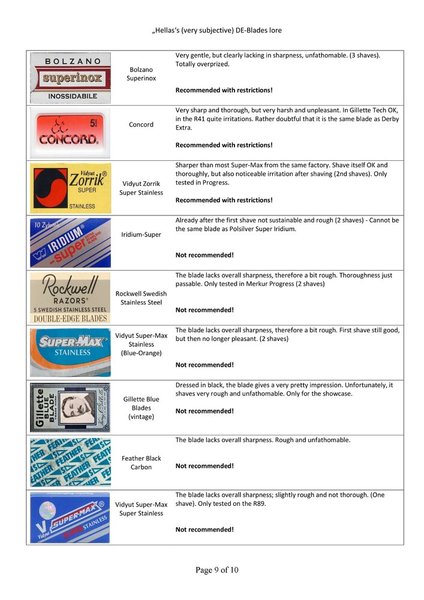 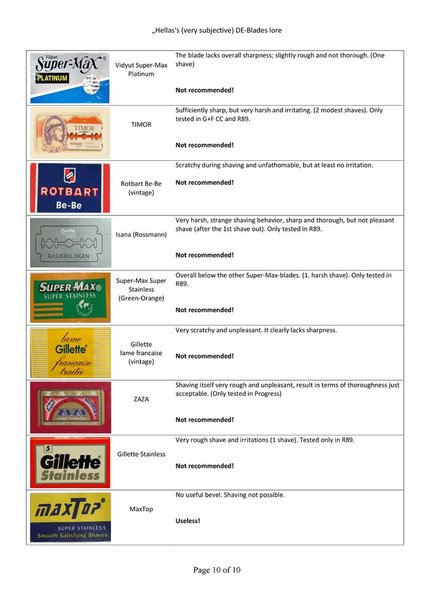 Have fun testing. I like to read your reports in the individual blade threads.

Thanks for all the work in putting this together. Should be interesting to compare it to the one Harkos made. (A shame that it would involve a massive amount of work to translate from Dutch into English as that one was also very very helpful).
Practice for a Long Long Time and All Is Coming

I would like to thank you for this wonderful report.

You are also absolutely right to say that nothing is as personal as a razorblade and that not every razorblade is a good combination with every safety razor.

So I find a Feather blade in the iKon 102 the ultimate combination but I shouldn't think to shave me with the same Feather placed in the Joris / Plisson.

Over the years I have tested many blades and for me the Gillettes Nacet, Rubie Platinum Plus, Permasharp and the 7O' Clock Super Platinum Indian Blacks are the absolute top.

From the carbon steel blades, the Treet Black Beauty is my favorite.

But it would certainly be an enrichment for the forum if the very extensive razorblade overview of Harkos could also be placed on this forum.

Moderator
Thanks for that nice overview. Contrary to some here, as much as I try out different razors, as little am I interested in trying out blades. Probably because if I have to try out all razors with all blades I have to shave six times a day, and my beard just does not grow fast enough for that. Nor does my face heal fast enough, come to think of it, which with some razors is necessary. So I basically just put a Voskhod in everything. Most of the time that is.

Absolutely true. That is one massive work of knowledge.
Cheers!
Richard

I'm thinking about it, but that's something for long winter evenings

@efsk: I'm doing exactly that at the moment, every blade kind I have is tried in every razor I have (not that many but enough) and I take note how they shave. Has been a few months and I'm not even halfway and I shave twice a day!). Interesting to see that some blades do Wonderfull in a select few razors and not in the others. For instance your beloved Voshkod only has one excellent mark next to it and that is for the Blackland Dart, shaves like a dream, in all other razors it's more of a Meeeuh kind of shave (feels not sharp enough to me).
Practice for a Long Long Time and All Is Coming

Great also in english. Question is how long such a test result is valid as changes in the production process could occur?

If you find time please add the Shark Platinum; I find it to be very mild yet excellently sharp.

Don't criticize anyone till you walk a mile in their shoes so when you finally do criticize them...you're a mile away and have their shoes.

carved in stone for eternity

Honestly, no Idea if P&G decides to rename blades in St. Petersburg or change production totally. At least regarding the production change of some of the blades that are only on-side-laser-engraved now (e.g. Sputnik, Astra Superior Platinum, Perma-Sharp) I could not finde markable differences.

Will be difficoult as a) I don not have any to try b) you can start a seperate thread by you own for that blade. This thread gives only a small overview and shall not replace the hopefully comming mass of individual threads for every single existing blade worldwide
---------------------------------
Forum FAQ | Support us and donate! | FdR-German wetshaving community