Stream of consciousness: my first attempt at Dilucot (warning! boring)

Disclaimer: I am still largely in the dark, although this forum and website are a source of light to which my eyes are slowly becoming accustomed... this intent of this post is to puzzle things out by throwing my experiences out there for review and discussion with you the experts, not to pretend any expertise of my own.

One of the first razors I purchased on FleaBay was a nice (despite a few pits/flecks I still need to completely polish out) "New Old Stock" Carl Wüsthof Gladiatorwerk 5/8" round point, advertised as shave ready if I recall correctly. It wouldn't shave as received... I ended up honing it on my first set of hones, a 4k/8k Norton and finished it (as well as I knew how) on a Chinese 12K. It shaved OK, but as I am no honemeister my handiwork left me a little cold. It seemed to lack the smooth power and low feedback of a big heavy razor like my Hart or 7/8 Friodur, or the higher feedback of my ERN or super high feedback of my recently acquired, wafer thin bladed DD Satinedge. The shaves I got were OK but nothing to write home to momma about.

For this reason, I picked this piece to try my first Dilocut with, imagining and hoping for a large degree of improvement. After dulling on a glass, sixty half strokes on "Coticule Milk" shaved arm hair. After that, x-stroking through fifty laps for each one of five very slight dilution stages (turning the stone 180 degrees each progression), finalizing with somewhere around 150 laps on plain water and a clean coticule, left me with the following:

1. I am amazed at the power of the coticule and truly impressed by this combo stone purchased from Zib. This stone seems purer, slower and harder than my other narrower, older combo stone, and in my very limited experience, the feedback more pronounced of the two.

2. As the blade grew sharp, there was definitely a very delicate, almost velvety feeling of drag, especially at the end of the stroke but the further I went the earlier it started. Towards the end, adding greater amounts of water was the only way I could reduce the sensation. As I progressed past the initial stages and the slurry slowly diluted, I had the sensation of the blade being sucked against the coticule, almost as though honing on a magnetized surface, and allowing me to feel the texture of the surface of the stone through the blade. What this means, I have no idea. Enhanced feedback as my technique improved, or just too much fluid on the stone? Or does my combo stone just suck?

3. Not sure if it's a poor honing or stropping job, or a bad sample of hair, or poor HHT technique, but the best I could achieve was a "violin".

4. Despite the lack of joy on the HHT, I got a completely irritation free, super close BBS shave on 2 days growth, perhaps my most comfortable and close shave to date. I was even able to go against the grain everywhere but the front of my chin and upper lip (still not that skillful yet) with impunity. Yet, at the same time, the overall character and feel of this blade were unchanged. Still very neutral, like leaving the treble and bass adjustments on a stereo dead in the middle and feeling strangely neutral. I guess that's not a bad thing since the final result was pleasing. Also, I think I like razors with pointy tips even better than I like round points, which is a bit surprising as spikes scared the hell out of me when I first started.

I really like the Dilucot method and the result it provided, and hope it can only get better as my technique improves... I will have to try it on my other Coticule and compare notes. Your observations and comments are requested.

I'll post a picture or two of the razor tomorrow if I can.

I've got no doubt that you can achieve a higher level of keenness on your stone. I go until I get HHT4 or 3 at a minimum before coming off the coticule because a good stropping session can improve it by at least 1 or 2 degrees. If I can HHT-4, it doesn't take me long to reach HHT-5 on the strop.

One thing that I love about my edges off the coticule is that it is really smooth and forgiving. I don't get any harshness with these edges, and my face feels smooth and pampered and not damaged at all... It's a velvety, yet keen, edge
G

I enjoyed reading this.....especially as I read it just after finishing my first attempt at dilucot on my DA - which took about 4 hours!

I reached a similar point as you when i first finished, but I had HHT 3 from the heel to the middle of the blade, then it slowly edged off to a struggling HHT 2 at the toe. This is definately due to my stroke - need to get the rolling x down to get the DA the way it needs to be.

With regards to that - cheers gary for suggesting the marker test on the edge! Thats ridiculously usefull. I did find that the honing sensation was completely different until the marker had been honed off - it was smooth, yet had more drag.

So I test shaved a lil bit of my cheek with and against the grain and found what I thought I would, and was pleasantly suprised! The shave from the heel to the centre of the blade was brilliant and irritation free. From the centre to the toe I could feel the blade struggling a bit in comparison the the other half, but still left great results with a very small amount of irritation.

So I took it back to the stone, very light slurry and moved through the process again. BUT.....as my back was starting to ache as I was 3 hours in I rushed it a bit, and diluted far too fast and ended up (after about 300 laps on clean water) with a razor that BARELY reaches a violin after stropping! ARGH!

Lesson learnt - keep CLOSE attention to your stroke and the feel of the stone, dont rush, and stop and go back to it later if you cant do the afformentioned!
G

I've done that many times. Dilucot method also as and still does give me back ache. Your back gets use to it. Just start again from a good slurry, you should be ok.

Sounds all very good. You seem to have a Coticule that exerts much draw. That can be both blessing and curse. I've addressed it a bit in this article:
Please, Log in or Register to view URLs content!

First: the idea behond the HHT is to correlate the behavior of your source of hairs to your shaves.
That said: on my source of hairs, a "violin" after the dilution phase is sufficient to get the rest during the finishing stage. Please refer to this thread (and the one I linked in it) for some markers on how keenness can be maximized during finishing on a Coticule:
Please, Log in or Register to view URLs content!
If you measured a "violin" coming off the hone, and you couldn't improve it with stropping, than there's either your stropping leaves something to be desired, or the source of hairs is not clean. (more info about the hair source in the HHT-article)

You did fine for a first dilucot. Honing can only change the feedback of a razor within a very narrow margin.

How boring would it be, if there was no improvement to expect after your first attempts?

Thanks for posting,
Bart.
S

Thanks for the encouraging replies... lots of great information. Whets the appetite for improvement, so to speak...
T

Thanks for the run-through.

I'm at the same point as you were at the beginning of this threat.
I'll follow your lead and see where it takes me.

Hats off to you.
S

Thanks Toon, not much of a lead here but I'll gladly walk side by side with you across the finish line! :thumbup:

Here's a bit of an update:

I have a bit of a challenge HHT wise. I keep my hair cropped short, and Mrs. Standardgewehr has very thin, chemically processed (colored) hair and is fond of "styling products" so not a good donor. I got a pretty good shock of hair from the gal who cuts my hair (floor sweepings from another client) that is natural and freshly washed. Unfortunately it is also very fine and does nothing on my razors' edges.

Then I read a post about using a badger or boar hair from a brush... Viola! Inspiration! I plucked out one of my own chest hairs (somewhere between boar and badger I think :blink: ) and after very, very carefully (and more lightly than ever before) stropping the razor referenced earlier in this post... VICTORY!!! Not sure if its because the hair is coarse, but I have achieved a cross between HHT3 and HHT5. The hair is dragged across the edge, at which time it catches but does not "pop", it just folds over like a felled tree, quite silently. Maybe it's just a really, really strong HHT2?

Anyway, definitely room for improvement in the stropping and honing but progressing I think! Pictures soon of the razor, too, I promise.
S

Well, it's a long way past the "tomorrow" I promised pictures on... but better late than never! 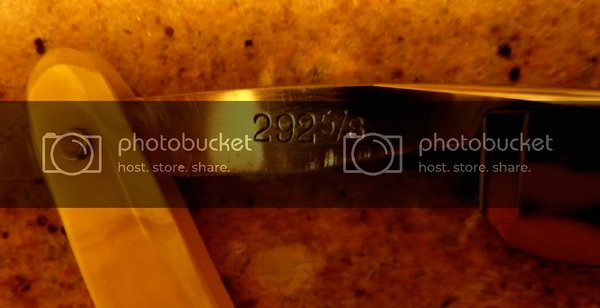 On a side note, the little guy below is a fine shaver as well (going to try it on a Coticule soon.) Maybe I should go over to SRP and create a razor club for these... I could call it "The Wankers" LOL!!!