I can still remember the moment when the Tabac RS was ready become a lather me for the first time. At that time I had used spray can a few years and did not know until then that there are shaving soaps at all. Someone had given me the tip to try shaving soap. Would really be an improvement. Said and done. I do not remember the place where I chose it, but the impression the scent made on me, somewhere in the twenties, was enormous. I'm not one of those who were kind of biased by this smell and he just carried me along. This nostalgic, harsh, slightly sweet stuff that was flattered me had to come home! And then came the first lathering associated with the first shave.

I have not heard any complaints about the shaving qualities of this soap. Would be surprised if this would be the case here. It is in my opinion beyond all doubt and I believe that it deserves the title of a reference soap in this regard. For me it is one of the European soaps on which everything else in terms of shaving qualities and lathering behavior has to be measured. Before the discovery of America (in terms of shaving soap), this lather was reserved for Tabac. This soap produces such a rich, fat and comprehensive lather that it is really magnificent. It proves so great during the shave that it not only does stand up to any soap in comparison, but rather becomes a benchmark. The care properties are not quite in the way we like them from knowing many US Artisan soaps, but to like this for me sometimes "overprotective" at all, is certainly a matter of taste. For me the Tabac is top in every way regarding the qualities.

The scent of the soap, and of course the whole Tabac original series, is undoubtedly highly controversial. I have not heard many neutral positions yet. It splits the minds in full affection or full dislike. This aroma, often referred to as an old man scent, is familiar to many from the past and associates it with old, stale, obsolete, or obtrusively untimely. The lovers can bounce off all these titles without any problems and indulge themselves in this fragrance experience, run around contentedly and self-confident with this German 50s fragrance and can not get enough of it. That's just the way it is with fragrances that are not pleasing, and Tabac is far from that.

Testing, after you have taken a nose, this shaving soap should actually every one. Worth it. Personally, I've been through Taba life for years and years. I still like it very much. Unfortunately, after all these years, I have obviously had a small allergy to some ingredient that gives me mild irritation after shaving. That's why it's not used that often lately. That does not diminish the quality of Tabac otherwise. 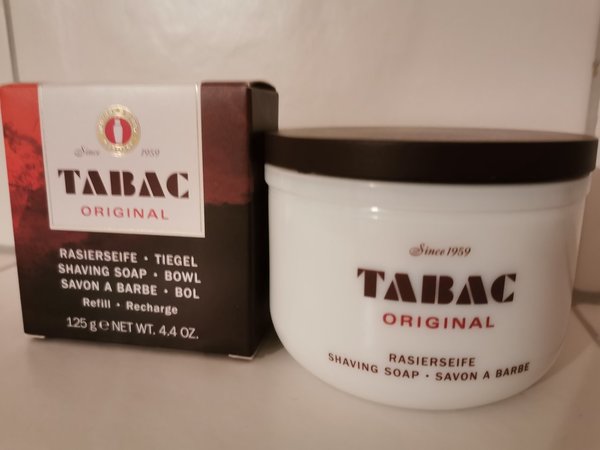 Thanks for this review. Indeed, one of the best shaving soaps money can buy. Yea, the smell.. mhhh.. In general i love it, but not every day and not on warmer days.. but now the winter comes and it’s Tabac time.

Thank you. To be honest I’am a bit neutral with the scent. Don’ t love it, don’t hate it.
But it is a must in the collection.

Moderator
SU-Patron Gold
I used to believe Tabac was the best a man could get in terms of shavingsoap. However, after a while the smell started to give me old man associations, and I found soaps more nourishing for the skin. Since then, Tabac lost its appeal for me.
Cheers!
Richard

A review that touches the right tone for me.
I am also a dye lover of all Tabac products and use them very regularly.

My acquaintance with Tabac was through my father who nowadays at 86 years of age still shaves with it.

But above all I appreciate the smell very much which also applies to the sister brand Irisch Moos.

There is always a discussion about the quality and ingredients of Tabac soap.

I personally think it's a good protective and sliding soap and, just like Marantha remembers, it could have been a little more carefull. That's why I always add a few drops of glycerine to the lathering process.

An ex-soap maker (the creator of scheermonnik shaving soaps) shone his light on the ingredients list on the Dutch forum and below you can read his findings.

In response to shavers who described Tabac as a chemical bomb he wrote:

Everything under CI 77891 is nothing more than allergens/odourings that occur to a greater or lesser extent in all shaving soaps where either a synthetic scent(s), or essential oil(s) or a combination of both has been used. You can just, because they are neatly mentioned, assume that it is safe to use. They may sound complicated and scary, though, but a little more depth into the matter might give a different picture.

Those 4 extra ingredients may have been there all along... why now on the list of ingredients?

If, for example, the European rules on the labelling of allergens are tightened up. Suppose that the percentage of allergens present is changed from 0.01% to 0.001%, then suddenly 'new' ingredients appear on the list in a painful way.

It is also possible that new/other fragrances have been used with other allergens.

In Europe there is a list of 26 allergens that are known to cause a possible sensitivity reaction. If these allergens are more than 0.01% present in your product (which you rinse off, so called rinse off product) then you should mention them.

If you don't find those allergens on a scented shaving soap, you can almost assume that the soap hasn't had a safety rating and you have to rely on the maker's blue eyes. With American soap makers such as Stirling, Oleo Soap Works, Catie's Bubbles etc. for example. I would be more sceptical about that because you don't know what's in those soaps and certainly don't judge them independently on safety. Eufros, another one... illegal within Europe.

In addition, there is no more potassium or sodium hydroxide in the end product. These disappear completely during saponification. A correct list of ingredients does not tell you what is in a soap, but what has been used to make the soap and then decreases in quantity.

It is also true that perfume consists of thousands of ingredients. If you start counting, Tabac consists of maybe 4000+ ingredients. I would count perfume as one ingredient and not count the allergens. Then I would end up with... I wouldn't count... 10 ingredients needed to make Tabac. It's not that bad, it's very common.

Tetrasodium EDT A can capture and hold other substances. It also fulfils this function in cosmetic products. "Hard" water contains many calcium and magnesium salts that inhibit the action of many cosmetic products. Soap, for example, will foam badly or not at all in hard water. Together with calcium or magnesium, it forms a non-soluble compound (calcium stearate) that sticks to the skin. By adding a chelating substance, the calcium and magnesium salts are bound from the hard water and can no longer react.

Thanks for the information, very enlightening, to be honest i never really worried about any soap sold in the EU, as rules for these types of products are tight, maybe, if you look at how hard it is for small soap makers to start and survive, to tight, very little innovation is happening in the Netherlands caused by the rules, the moment you produce something you have to get it tested, and that costs a bundle, any change in the formula will trigger another test round (more money blown away) making it nigh impossible for small producers to survive :-(
D

Tabac as become my performance baseline, the one soap I use to judge all the others.

I distinctly remember getting my first big order of shaving gear where Tabac was included and smelling all the different soaps and thinking "is this what all the community is raving about, all this great smells?". I was kind of disappointed, in general and no only with Tabac.
Needless to say it was not love at first smell, but it quickly grew on me and now I love it.

So after finally getting my hands on a real Tabac (shaving stick version), I could not wait until Tabactober and tried it out tonight. I have to say that I was quite impressed. I normally don't like shaving sticks because I don't enjoy rubbing my face with something hard, however I was surprised how little I applied on my face and yet it produced enough lather on my brush to last me three passes. The scent, well, I was expecting worse, but it was quite pleasant, almost a masculine floral.

The shave was excellent. The soap produced a thick cushion lather that allowed enough slickness for the razor to do it's work without irritation. There was enough lubrication left over afterwards to do a dry touch up, and my face felt good afterwards. It must be all those unknown chemicals numbing my face, but I have to say that my first impression was favorable.

I am not sure if I can use it for an entire month, but can definitely see using it more often during Tabactober.

@gvw755 May I compliment you (again) on your extremely exquisite taste.

Tabac it is and remains a greatness under the shaving soaps.........although Irisch Moos from the same manufacturer was allowed to charm me a little bit more.
H

Tabac was my first real soap. Didnt use anything else for years! The lather was a bit irritating when it was left on my face to long. Might buy another one.
D

You might want to try Fine Accoutrements soap, which tries to mimic all of Tabac's shaving characteristics but with different scents.
As it's not made by the same company (I think) the ingredients and/or perfume are slight different and maybe that's enough to be better for your particular skin.
Personally I only tried a sample and I liked a lot, it's on my buy list for sure.
H

It smells the same?
D

They have their own scents which are clones of well known perfumes.
You can easily find out in each product description in the official website.