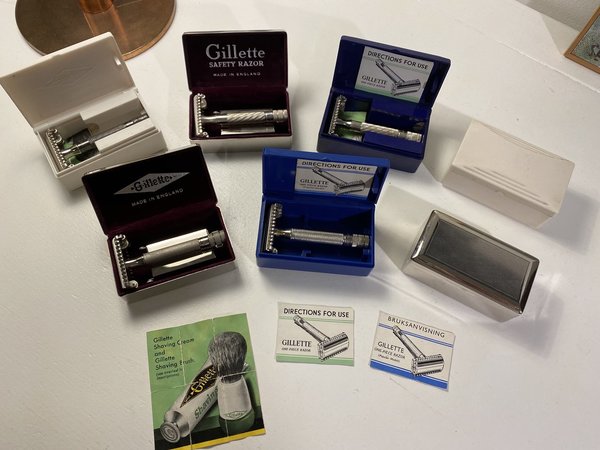 THE GILLETTE POPULAR was a unique line in the British Gillette 1930s model offering, made alongside a.o. the 1st generation Aristocrat. The Aristocrat and Popular models were quite alike, both being TTO open combs and having the same head. But the Populars have a distinguishably thinner handle than the Aristocrat, and on top they have that unique quirky feature where the blade doors do not open automatically when you twist the knob (as they do one any other Gillette TTO). Instead you have to twist the knob open but then manually flip the doors open either by turning the razor upside-down or by simply flipping the doors open with your fingers.

1938 and 1939 razor differences
The dead give-away difference between the 1938 and 1939 models is that the 1938 model has Rocket style handle knurling whereas the 1939 version has the gorgeous barberpole handle pattern also seen on the British Aristocrats.

The 8 set variations (I know)
In total I have so far counted only 8 set variations. For each of the 1938 and 1939 years the razor came in 3 different set versions, as also shown in this 1938 advertisement: 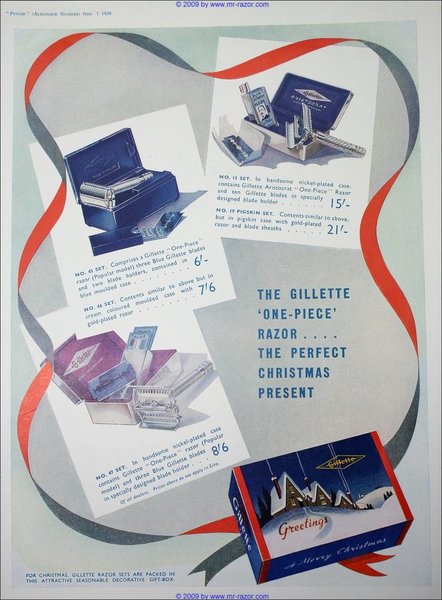 The #45 set held a nickel plated razor (some were all nickel, some had a silver plated handle) in a dark blue bakelite case. The #46 set held a gold plated razor in a similar but white bakelite case. And finally the more expensive #47 set also held the nickel plated razor (again, some with silver plated handle) but in a bright nickel polished case. This nickel case incidentally was almost identical to the #15 Aristocrat set case but was unique to the Populars as it had a different pattern on the top of the lid (see separate picture below showing the differences). And like the Aristocrat the case came either with the diamond logo imprint or with an all-block letter imprint. Both shown here, notice how large the block letters are.

The unicorn
The 8th, final, and to me most unique set variation came in 1940, according to mr-razor: A white bakelite case holding an only-once-seen razor with a bright nickel head and a black anodized nickel handle. A stunning model with that handle color which was only seen during the same era on some Rotbart models. This set is even harder to track down today as it seeemingly was made only for the French market, with both case and razor engraved/embossed ‘Importé D’Angleterre’. As far as I understand, we don’t know today which # moniker this set was given. 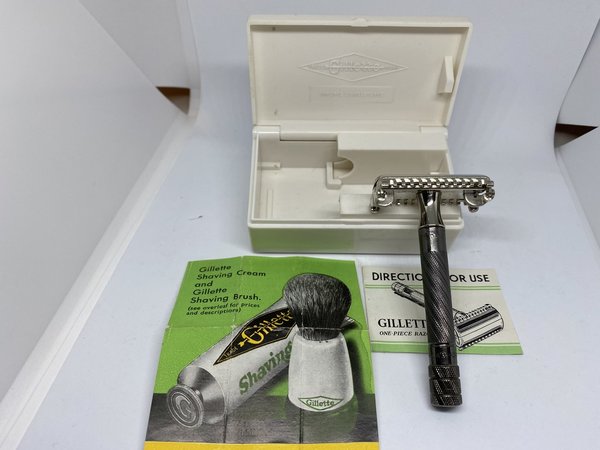 So far, I have been able to land 6 of the 8 set options, only missing the #4 Traveler and the 1938 version of the #46 set. And my 1939 gold plated razor is currently with Captain Murphy and Chris Evatt for a full refurbishment - as described in an earlier separate thread here on B&B. Half of my sets I’ve found matched but as such matched sets are rarely offered I’ve had to also look out for set pieces to get to where I am. Like if I’ve spotted a Popular case with a mismatched razor I’ve been quick to collect it and keep it until I’ve fallen into the correct razor to match a set. The true hard-to-find items are those loose bakelite bladeholders which typically have been binned many years ago unless part of an unused set sitting at the bottom of a drawer.

I hope that the future holds for me to find the last oustanding sets, so I can call my collection complete. Enjoy! 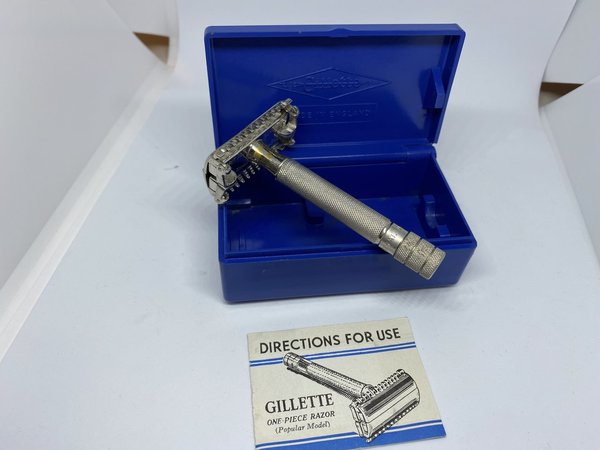 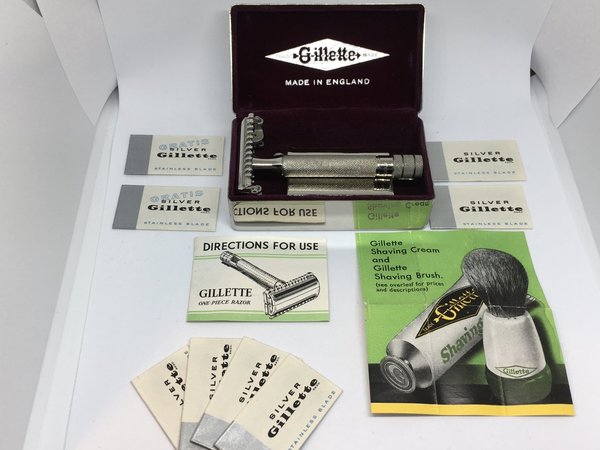 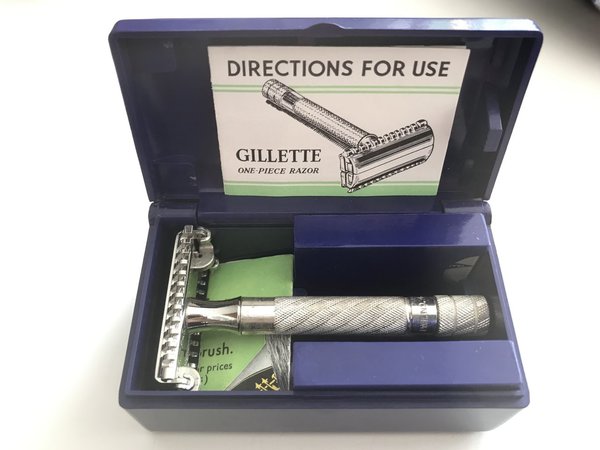 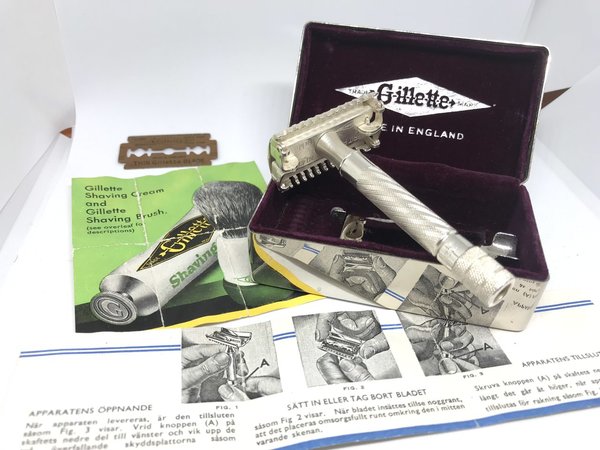 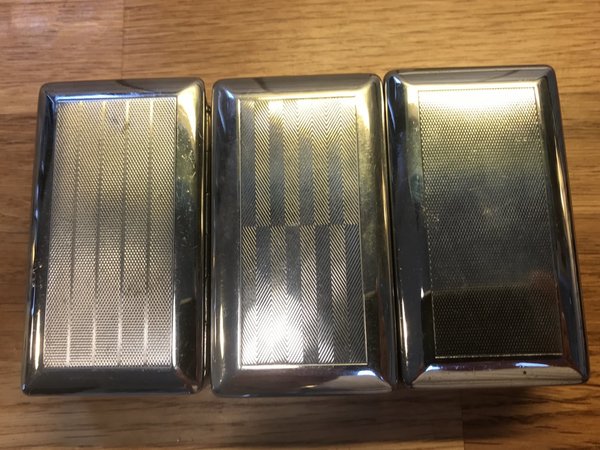 Interesting thing about the Popular (and Aristocrat Jr) is that they were supposedly lower cost alternatives to their big brother Aristocrats, however they are harder to find than their big brothers. I see enough Aristocrat Jrs floating around, but not is as large a number as Gen 3 Aristocrats, though some I suspect are mislabeled as something else because they do not have that distinctive Aristocrat look. The Popular is impossible to find. I think part of the reason is that @Northstonehill bought all of them.

Great collection just so I can see what I have to continue to seek.

Haha, thanks Les I agree, these Populars don’t pop up often and when they do they are either presented as a matched set (and costs a bundle, I saw a nice #46 set go for 400 USD(!)). Or it is mis-labelled as something else. My most recent one, the 1938 nickel razor popped up in a matching but beat-up #47 case but with a generic Gillette title to it. It is probably a bit more seen on this side of the pond...

Moderator
Thanks for the great write-up and ditto pics Peter! Outstanding collection of Populars you have. Your chasing these models and seperate parts shows admirable dedication.
An’ I don’t need no safety razor, neither. 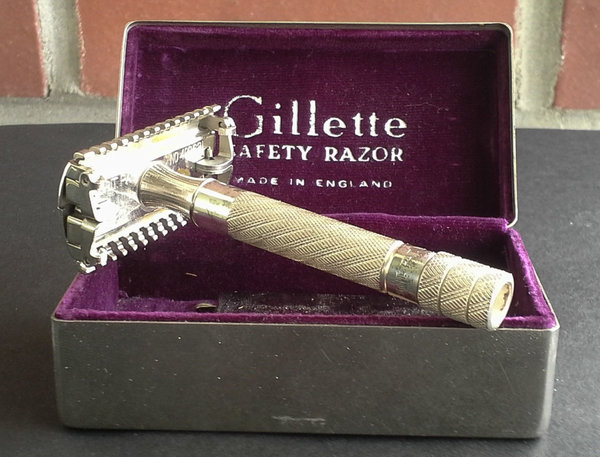 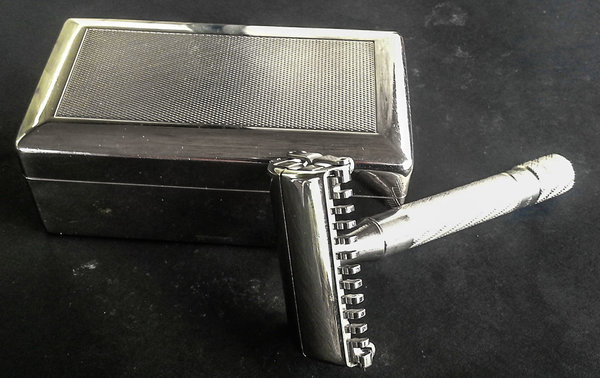 Gorgeous #47 set you have there sir! Silver handle?

Also interesting, that the size of the Gillette lettering imprint in the lid is smaller than the one on mine... I wonder what that is about...

i believe the case to be a #88 1945 new rfb thin handle case.i originally got my '39 popular uncased.still building..silver handle,400631 baseplate

No, your case is an original Popular case. The #88 case I believe has no knurling on the top of the lid

EDIT
Just checked mr-razor... well, color me wrong - I never saw that case with the New, but indeed it has knurling?! I stand corrected, good sir!

would this case be appropriate for the 39 popular? my new rfb thin handle came with it's original black bakelite case id'ed as a 1945 #77 on mr razor's site.near nos.this chrome case i found in europe by itself. my popular has 430 030 stamped on the handle but 400621 on the baseplate.it appears to be silver .. 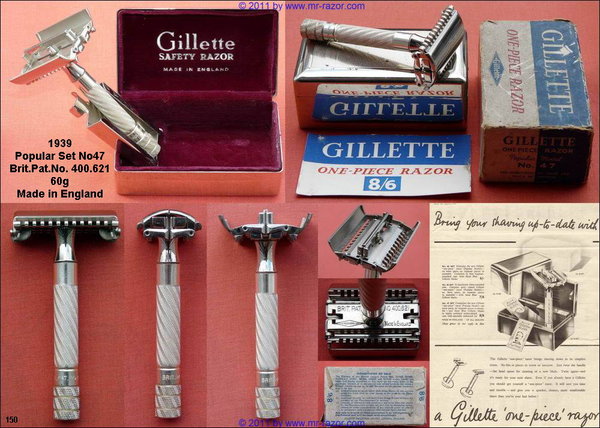 ahh ok..i was getting mixed up with your 1939 silver replate pic early in the post, it has the gillette and diamond logo insert.gillette england could have used the leftover popular cases for the last new rfb sets produced in '45..i guess the populars were the beginnings of the aristocrat jr razors..

Returned from Autumn vacation to a nice arrival. The 1938 #46 set arrived, wrapped in soft bubble wrap envelope(!), really scruffy looking so I opened with worry. A corner was chipped but could be glued back on, and thankfully no other new damages. But it has seen a lot of use, took a lot of cleaning and has an old but stable corner crack too. The razor has seen equally great use and strongly needs a new coat. But the mechanics are fine, and considering the rarity of the full package incl blade banks this is still an o.k. set to join its much nicer sisters.

Now I need to find the last remaining Popular set - the Traveller #4... 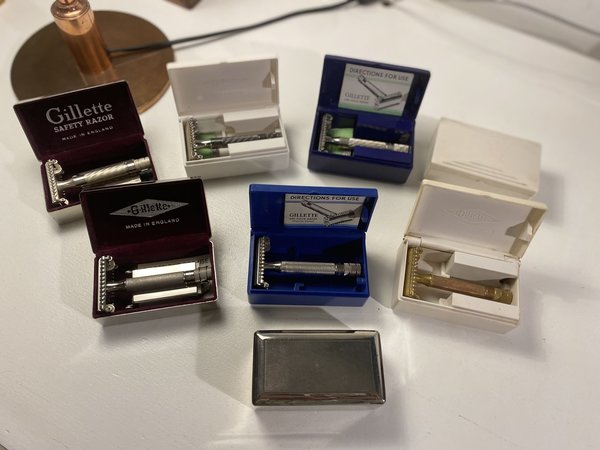 Well, for the sense of good order I wanted to update with latest arrivals, a much better condition 1938 #46 set to replace my previous beat-up specimen, and a shipper from another #47 set which has quickly moved on. Both items added to the roster which is starting to look somewhat complete. The 1939 sister goldie is still with Captain Murphy.

Enjoy! - Oh, and keep watching this space, I think I hear jingle bells somewhere in the dark sky above me... 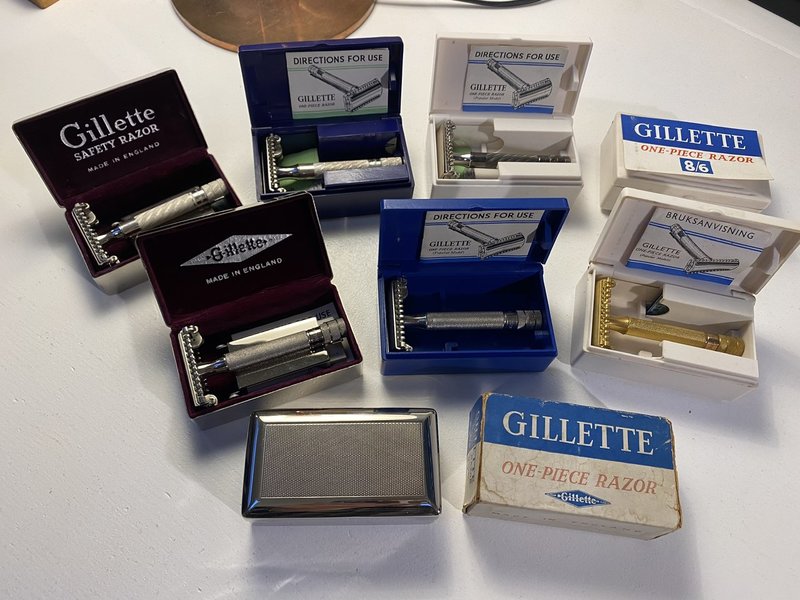 Well, Sirs, Santa did arrive and he brought be this!!! 1939 #4 Travelers set with Popular silver plated razor, barely used, with all original paraphernalia: bladeholders, OG cannisters, original THE BRUSH and soap even! Courtesy of a gracious big league collector more focused on sharing than on owning...

My Popular quest I think is over! 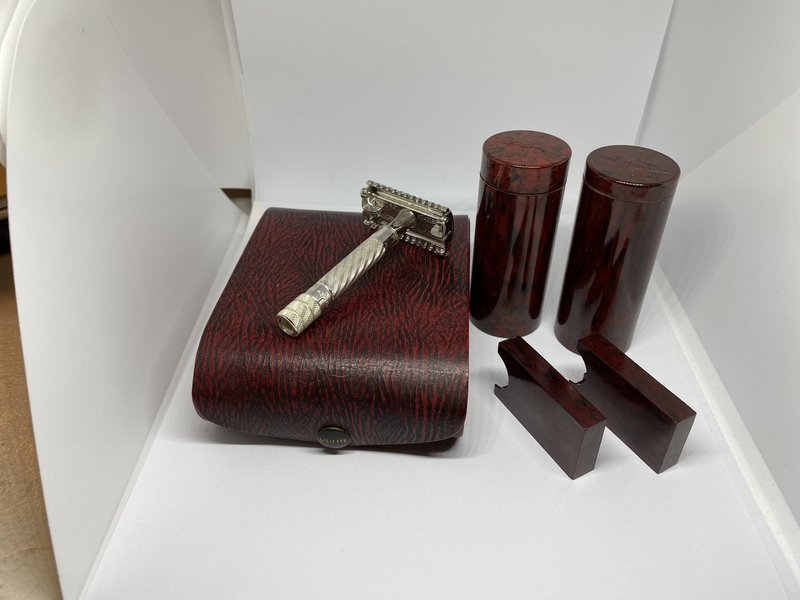 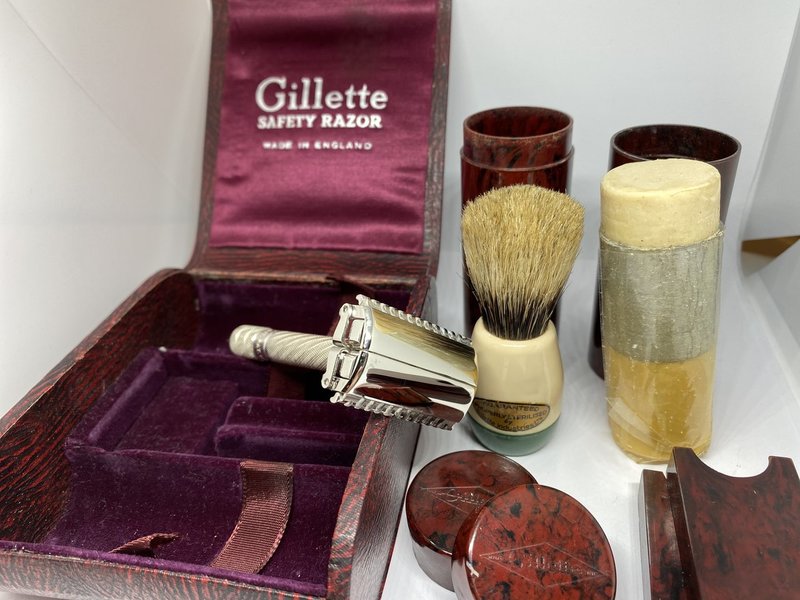 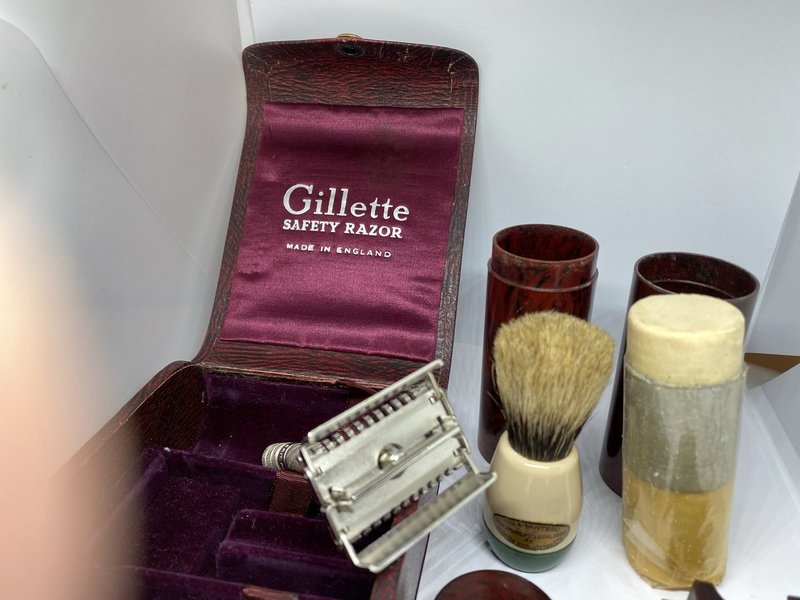 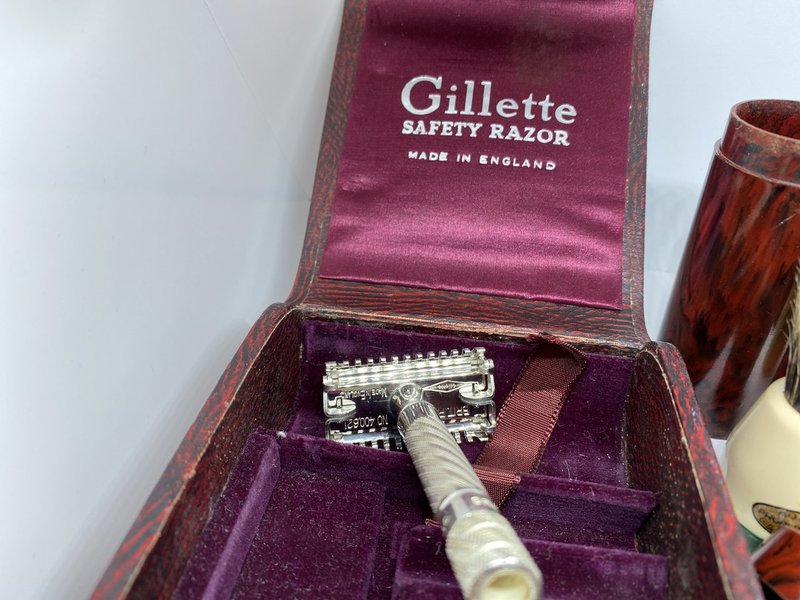 Moderator
Awesome set Peter!
An’ I don’t need no safety razor, neither.

Great set and an outstanding collection!

Thanks a bunch Guys!

Put’em all together in this full pic - and added another 1939 #47 set which in full disclosure contains a not fully matched nickel razor, namely a French version which rightfully should sit in a similar white bakelite case to the black handle. But for now it sits nicely in the #47 case, thus showing that the lid‘s Gillette logo imprint of the #47 case came in to guises - a diamond logo one and the all block letters one.

Now I just need the last one to return home from refurbishment. 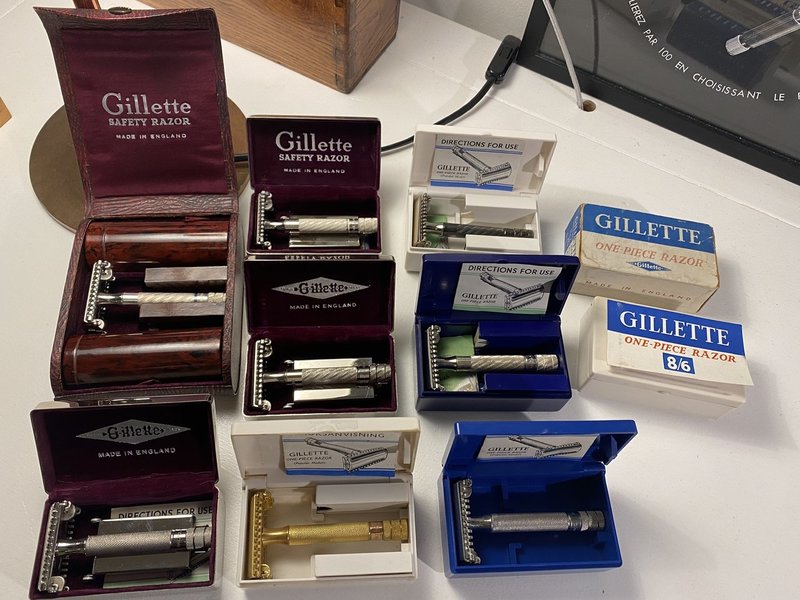 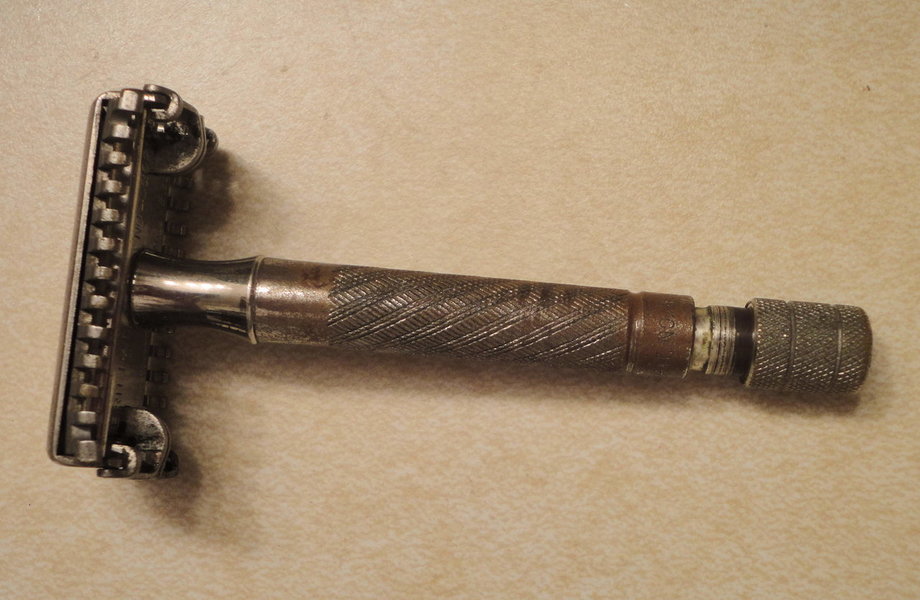 The razor took nearly three weeks to get to me. For two weeks it was lost between the local post office and the main line. I originally contacted a friend that regularly sent razors for minor repair and replating to someone that does that for a living. Because it took three weeks for the razor to get to me, I missed the last batch shipment and had to wait for the next batch shipment.

When the razor arrived, I noticed that there was another problem with a bent plate, lazy doors, and it appeared that someone took a pair of pliers to the handle, damaging the knurling. 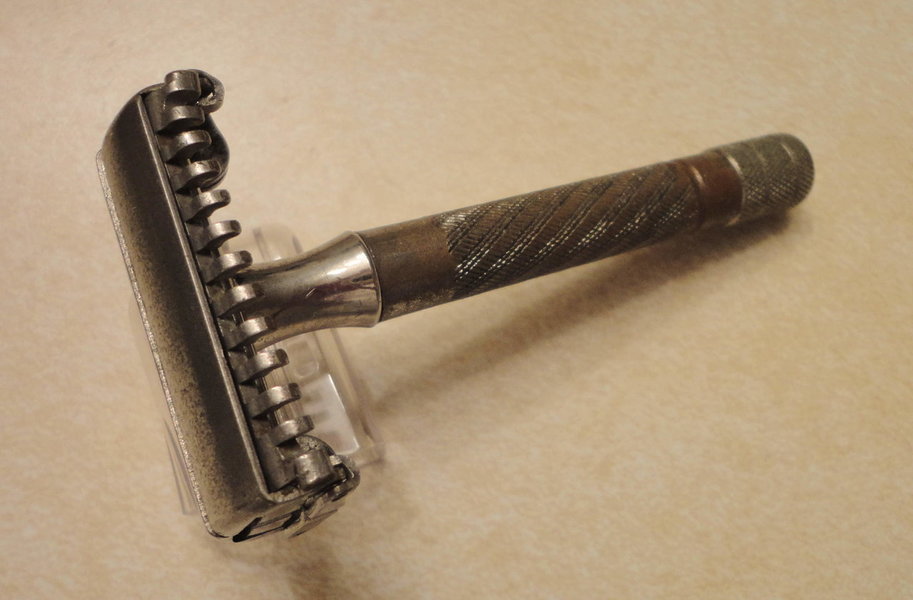 Peter calmly assured me that the base plate can be straightened and the lazy doors was a feature of all Populars and so I did not even shave with the razor before sending it off to my friend for the next batch. The next batch got held up because a razor that was supposed to go in the batch was too damaged and so we had to wait for a few days to send it off.

Repair and replating went well, but when the batch was shipped back, this was when that terrible winter storm hit Texas (my friend lived outside of Ft Worth, and all mail delivery and tracking information was totally screwed up. Finally today I received my Popular back and shaved with it tonight. No real eye candy like the others posting above, and I don't even have a case for it, but I'm not complaining because my ugly duckling turned out to be a beautiful swan. 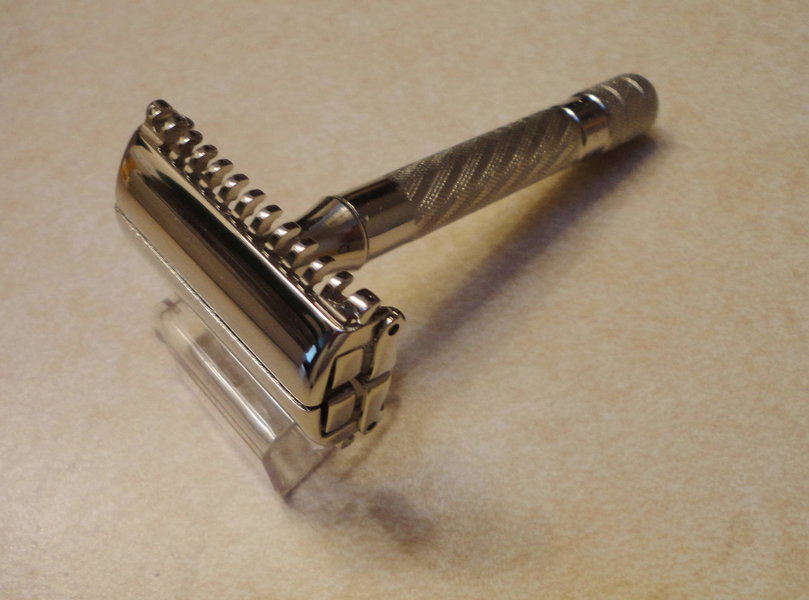 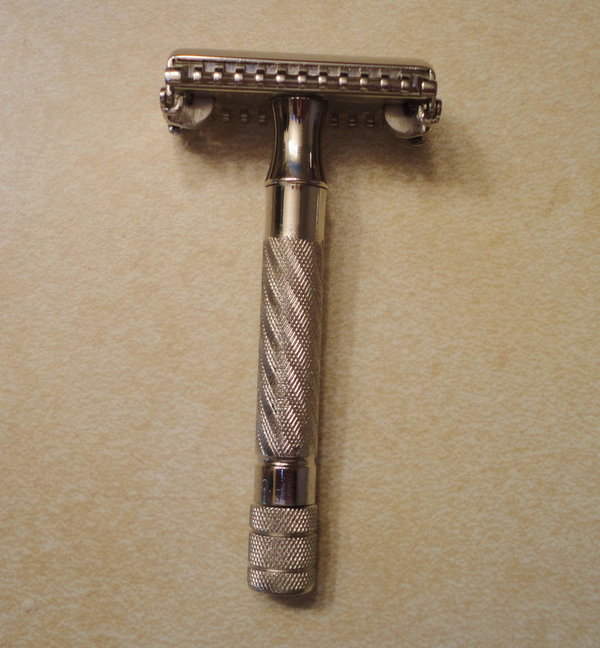 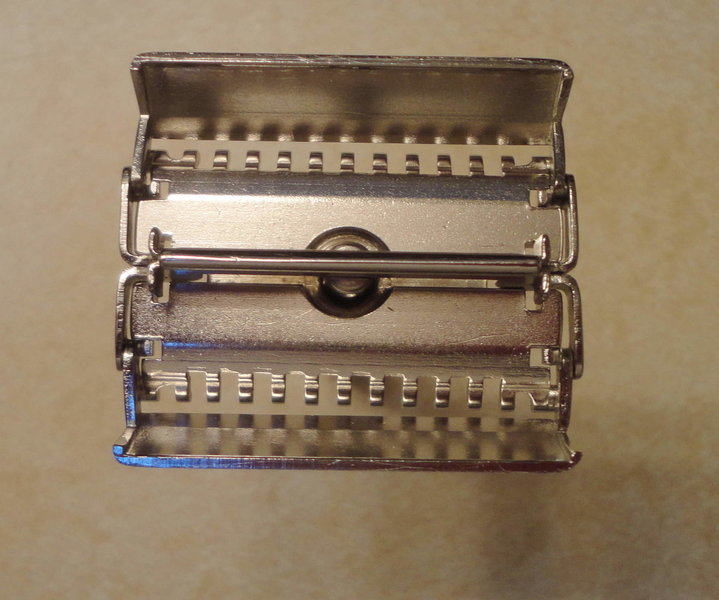 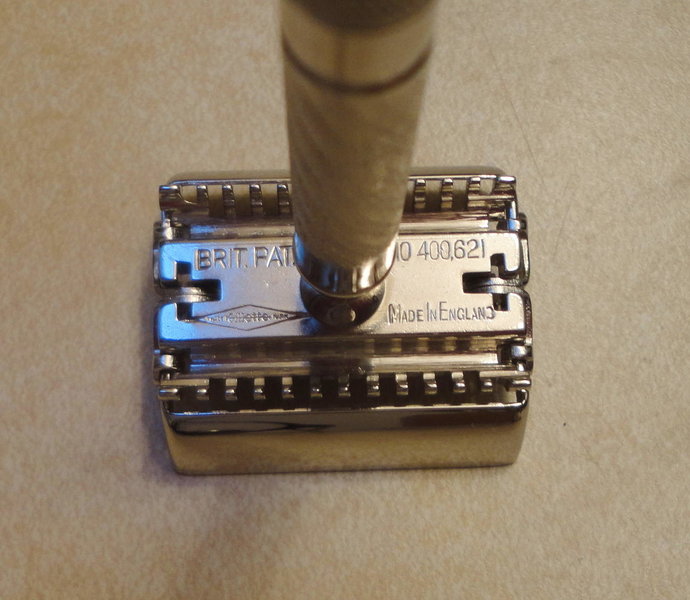 I want to thank Peter for his words of encouragement during the early times of my acquisition and disappointment.