when I was a kid, I inherited a rather worn whetstone which I remember my grandfather using to put a final razor edge on his chisels. I've been using the stone since my early teens whenever I needed a really, really sharp edge. I have never attempted to flatten the stone because the remaining layer is only about 3mm thick at the middle and I was afaid of ruining it.

the stone recently came apart into two layers when I took the lid off of the box. Knowing pretty much nothing about whetstones I eventually found this website and I believe that it is a yellow coticule stone and that the schist base has separated. the glue layer looks like some sort of hide based glue.

None of the other stones I've used have come close to this one for precision and cutting speed (even though I've probably been using it incorrectly and never with a slurry stone), and I've got used to it over the last 20 years or so. I'd prefer to restore it rather than replace it, as it's been in the family for at least 70 years, but I could do with some advice from people who know what they're talking about, unlike me.

so the first question - I've attached some photos, am I correct in saying that this is a yellow coticule stone? 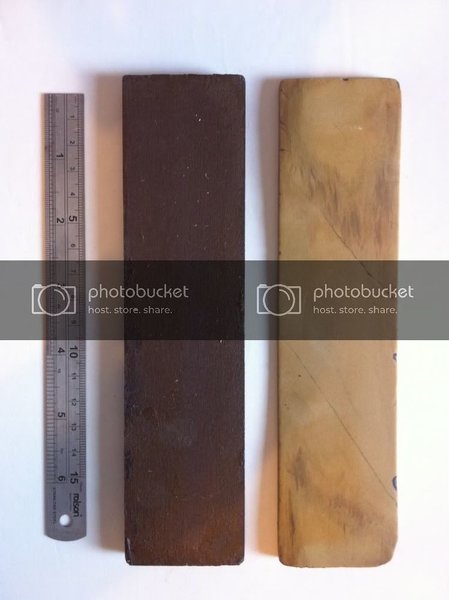 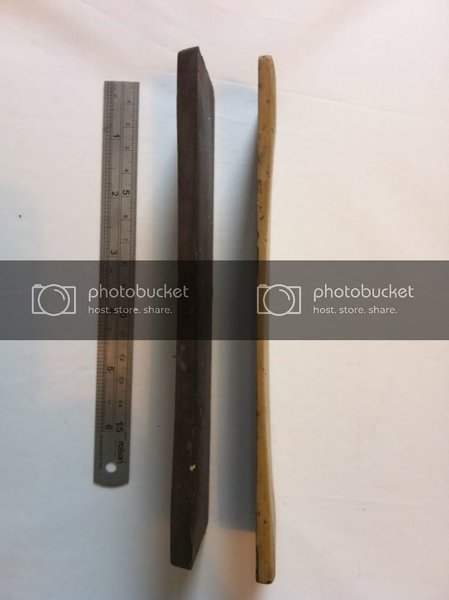 The second question - what is the best way to restore it? I have two plans at the moment. I can either glue the two halves back together with epoxy and continue as before, perhaps flattening the stone as it's probably too bevelled even for me now. or I could reverse the coticule layer and glue it to the schist with a thick bed of epoxy to support the gap left by the arch and then remove the glue from the newly exposed flat surface of the coticule layer which would then become the top. this solution may be the more practical but wouldn't help the aesthetic much.

Any advice you can give would be greatly appreciated.

Nice, that definitely looks like a coticule to me. Very nice dimensions, too! :thumbup:

I have been advised to lap my old Coti which was actually far less dished than yours. That was however with regard to razor honing and to keep as few variables in honing as possible. From your post I reckon that you do not hone razors on your stone (yet!

: ) so maybe that wouold be unnecessary waste of precious material, which would be pretty substantial in this case, maybe even 25%, I'd approximate.

best regards and have a nice time here,
Matt
E

Thanks Matt. Great website - I've already been tempted enough to start looking at prices for a straight razor and strop! particularly as I've been using a shaving brush for years and my current razor needs replacing...

Oh, so you actually are a straight razor user? That's lovely, double welcome then!

In this case, lapping your stone is probably necessary. Or, if you glue it flat side up, eventually the epoxy bed will start to show up right in the middle. Maybe a choice of some glue soft enough not to damage the blade would do the trick, but sooner or later you will probably realize it's time to get a new stone. I can't really decide which way would be better or offer any advantages.

Anyway, even 3mm of yellow layer should last for quite a while provided this is not too soft a hone...

Personaly,I wouldnt dare lapping it. As its very thin,it could risc breaking at the thinnest part. I would go for the "reverse" solution.

Actually I'm a lapsed straight razor user! I used to shave with a straight razor in my late teens and early 20's but switched to a safety razor when the edge got chipped and I couldn't afford a replacement but I always continued with the brush and soap (I'd got the vintage razor and a paddle strop as a gift and as this was before the Internet entered my life I had to work out how to sharpen it by trial and error). Somehow i never got around to replacing it, but I think that now is the time! I actually enjoyed shaving then...

Thanks everyone, I'm sure you'll be seeing more beginner questions from me in the near future

I wouldn't reverse the stone, you will still need to lap the "New" top surface, and of course this would remove stone from the entire surface, including the thin part, I would epoxy it back in place and lap it, almost flat giving you slightly thicker stone at the ends, that way you have saved a beautiful heirloom, and given yourself a useful tool, that may or may not be used for straight razors at some time.

Just the way I see it.

The reversal idea sounds ideal, but this is a heirloom stone.:-/ Here would be how I would do each.

For reversal I would lap the dished side a bit until an inch or so is flat on each end. Then I would glue it upside down and fill in the middle. Then I would lap the new top perfectly flat. It shouldn't remove a noticable amount of hone to do that - ive done it twice on vintage cotis, the glue always gives.

For keeping it original - I would just glue it down with whatever epoxy you have. You don't really have to get critical on that part. Ive used anything from JB weld to regular epoxy. Anyhow, I would glue it on and then do as raplfy said and lap it down as close to flat as possible.

How flat you lap it depends on what you use the hone for. If it is for razors, lap it completely flat. Even though you
have 3mm or so left, that will last the rest of your days for personal razor use. I have a hone that I lapped to get through inclusions in the stone. It is probably 1mm thick at one end and maybe a half or less on the small end. I have used it like this for 6 months on razors and it is still working great!

If you are going to use it on chisels/knives, I would do as ralfy said and lap it somewhat flat. The flatness doesn't really matter as much for that application. To save the most of your stone do all the preliminary sharpening on other stones and then finish with just a few laps on your coticule.

Whatever you decide to do, remember that once you epoxy it you can't go back! I would keep it as original as possible and glue it back the original way if it was a heirloom.

Thanks everyone for all your help, nice to see such a warm welcome for a newbie!
I've decided to try and keep the stone as close to original as I can so I've begun cleaning off the old glue. I'll post a photo of the finished project when I've done it!

On a related note this project has now got me back into straight razor shaving for the first time in about 15 years. Have started slow by just doing the sideburns, but had my first full straight razor shave yesterday. Not as close as I used to be able to manage, but no cuts or nicks - think I'm hooked!

Now if I can just remember how to strop it properly...

Welcome from me as well!

A decent read about stropping, and a video, can be found
Please, Log in or Register to view URLs content!

I have to admit it's getting better, a little better all the time... I've continued shaving with a straight ( or a cut throat if you're from my neck of the woods) and decided to risk buying a vintage wedge from eBay as a backup for my dovo basic. It was an cheapish Sheffield wedge with walnut scales and I have to admit the vendor seems to know his onions when it comes to honing. Shaved with out even stropping it first and the blade seems in very good condotion considering it's age.