I can’t believe it. One of the best existing Razor Makers of Solingen has not threat here up to now. This has to be changed.

Heribert Wacker is a fine old Gentlemen and IMHO the best still in charge grinding Master. Although his Father produced Straight Razor himself and owned the Trade Mark „Jungmeister“ (a Mark that is still in Use by Wacker and meaning „young master“) he send young Heribert to be trained as Razor grinder by Dorten & Co (Dorko). Now Mr Wacker sen. still trained his son Johannes who does also very well. For more information this ist the
Please, Log in or Register to view URLs content!
and here are some videos Dirk made when he visited Wacker (for the time being only in German)


So, but that was only for introduction of my recently acquired 1/4 hollow. I was looking for this razor longer than for the Stosser „wedge“. Both were introduced as a double set around 2009 and sold out very fast. However, this one use not treaded very well from his pre owners but after cleaning, polishing and honing it does not look to bad an shaves even better. Although marked as quarter hollow one hast to bear in mind that usually you get one quarter less from Wacker than usual. So, no Wonder that this one is half hollow as the „Kailschliff“ = wedge Stosser is a quarter Hollow razor. However, all my Wacker shave excellent. 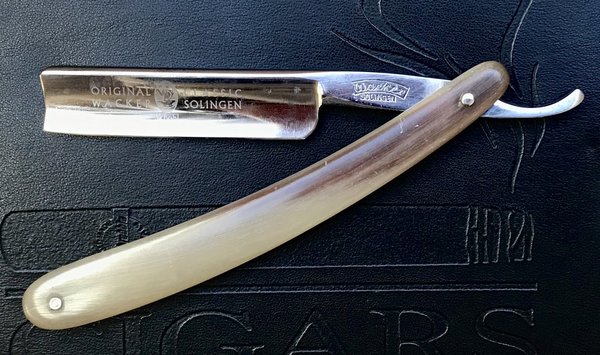 And there is one here as well: beautifull horn scales in these Wackers 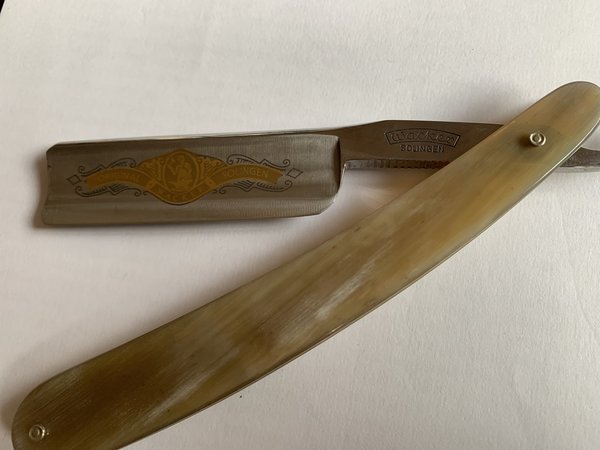 And then I have also these two: Left a Classic 2 ot the frist batch (60 Years old blank), right my Barbier`s bride 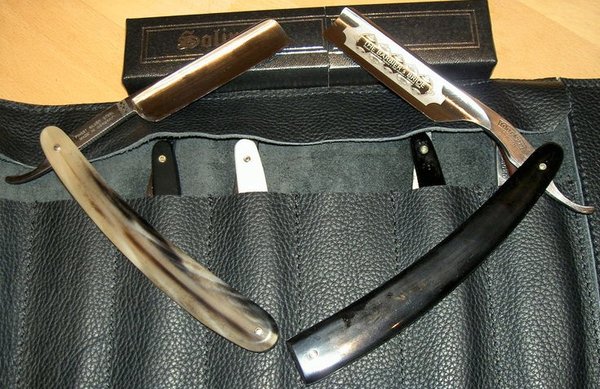 And not to forget my Wacker made from a 14er MoDoSo Blank (MoDoSo was a brand of Dorko, where Heribert Wacker was trained as grinder) 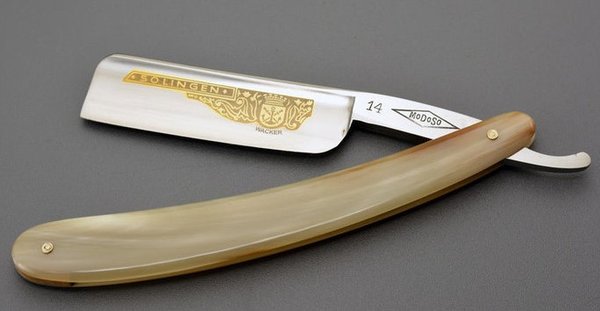 And last but not least my Stosser 6/8 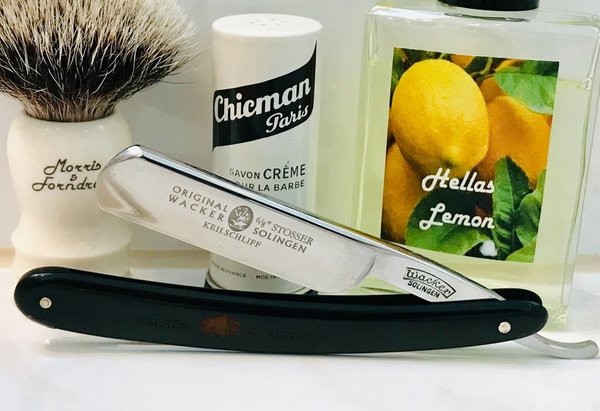 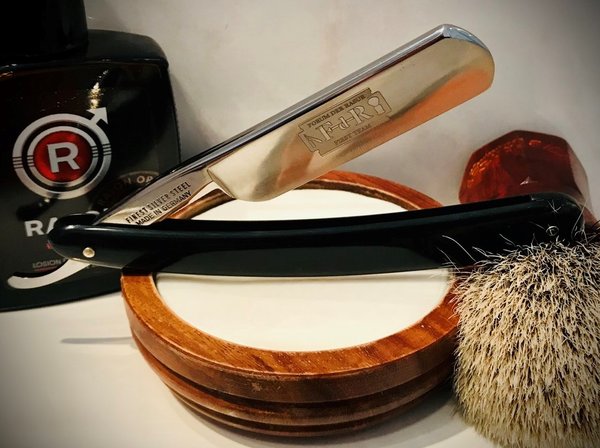 Mr Wacker went through his cellar for me. At the end he came up with two old blades. 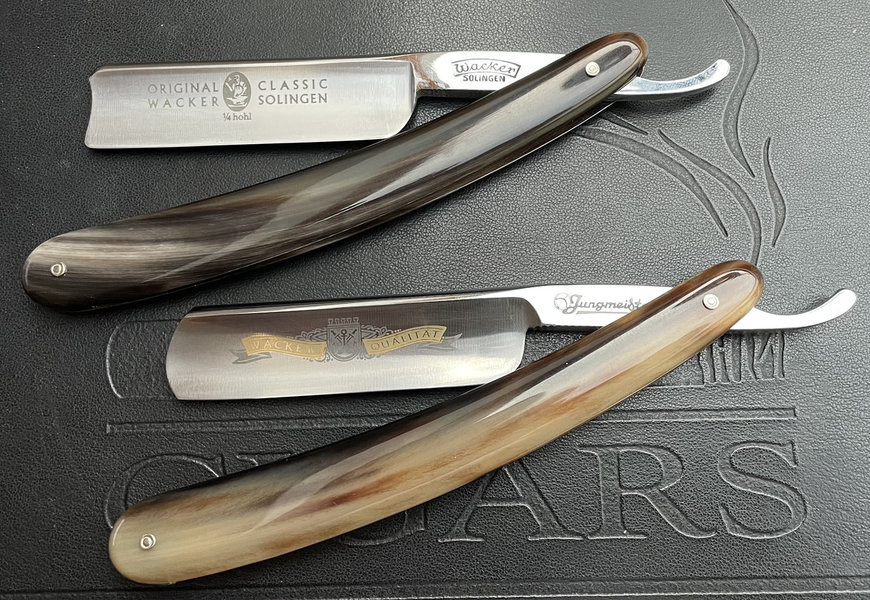 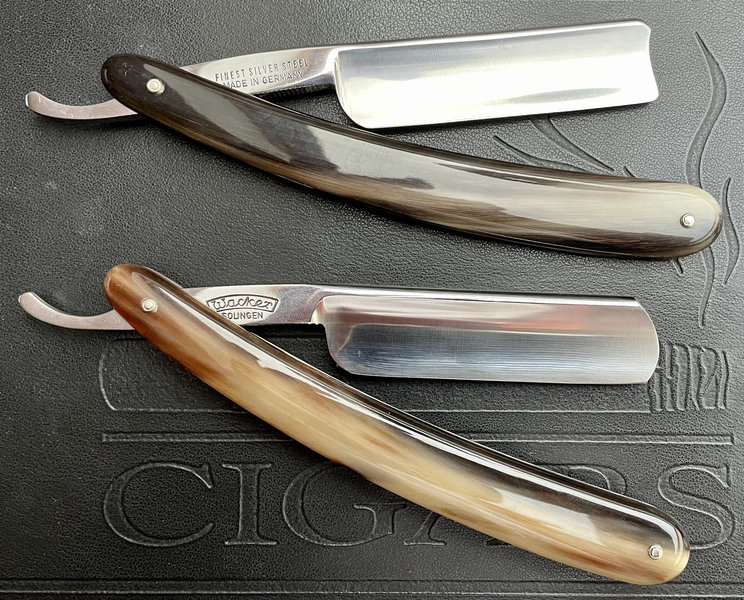 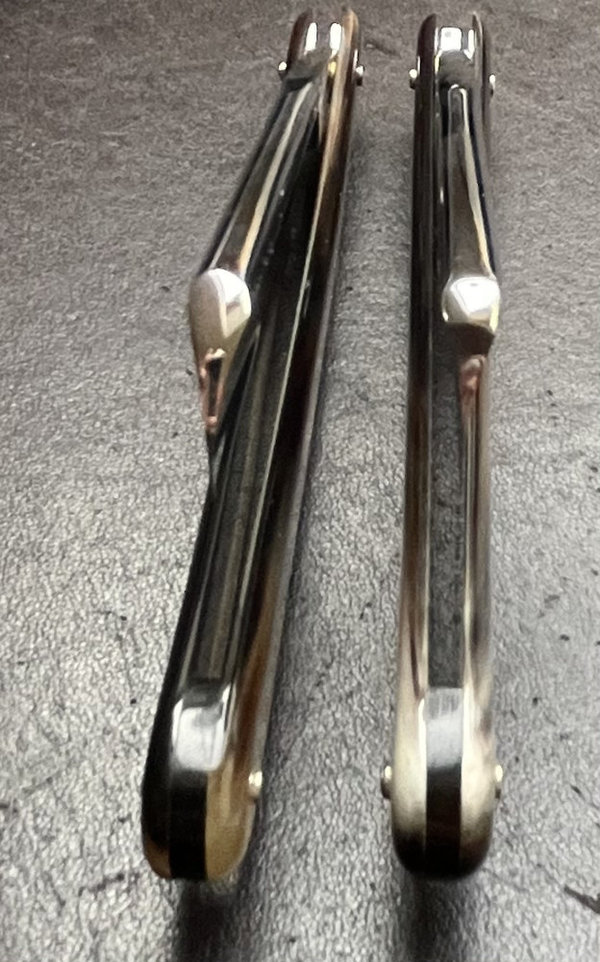 An as I had to organize my Razors again and had all my Wackers in Hands, here a picture of them all together: 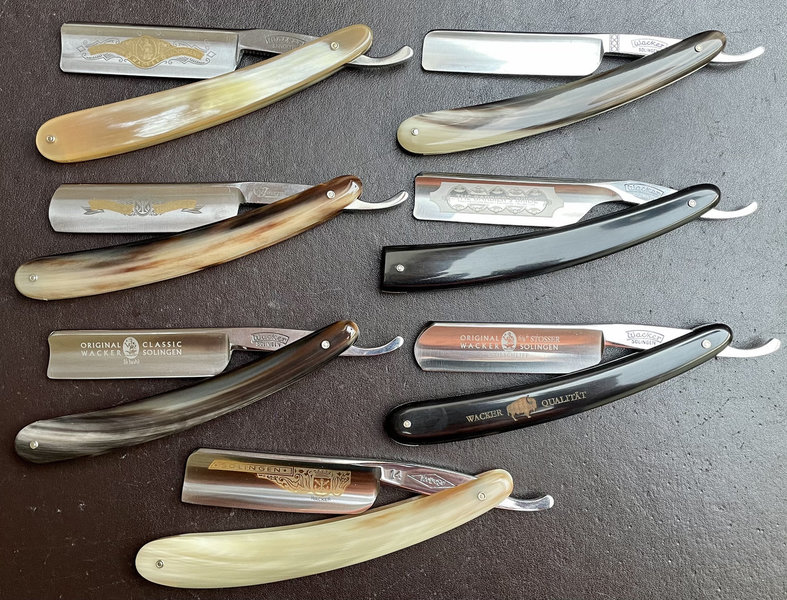 I have an old one on its way 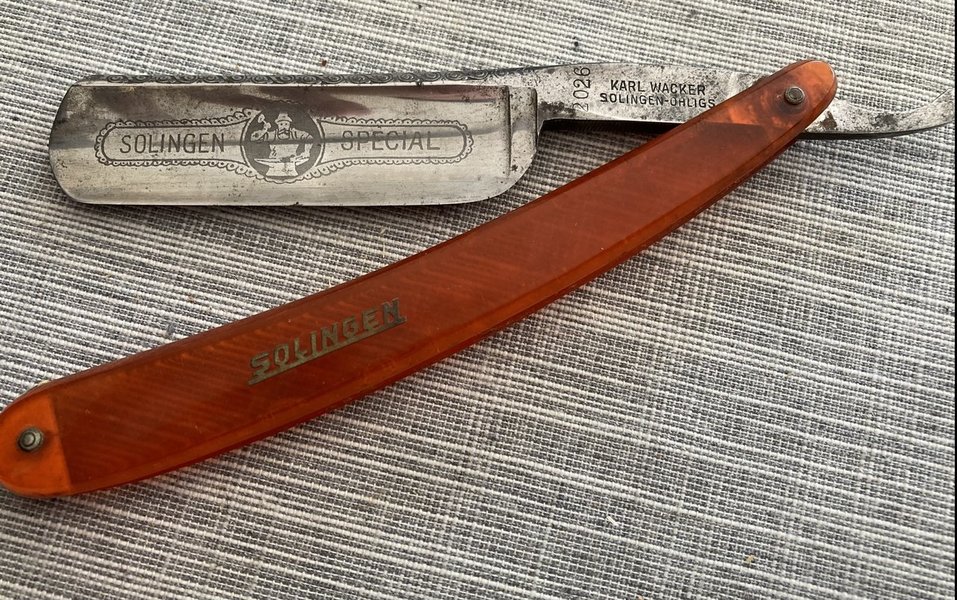 Nice catch Tony, blade looks very good and with a decorated back. Is it an 8/8 ?

Moderator
Cool Never heard of KARL Wacker before. Is he family or something?
Cheers!
Richard

Thank you @Hellas ,
any idea on when this razor could have been made ?

Moderator
Thaks. That would make this an oldie, I suppose?
Cheers!
Richard

It arrived today and I’m started cleaning it up, I am not sure if I want to stick with the original scales.
While the scales have to be cleaned the razor is parked in some horn ones Which are a perfect fit. 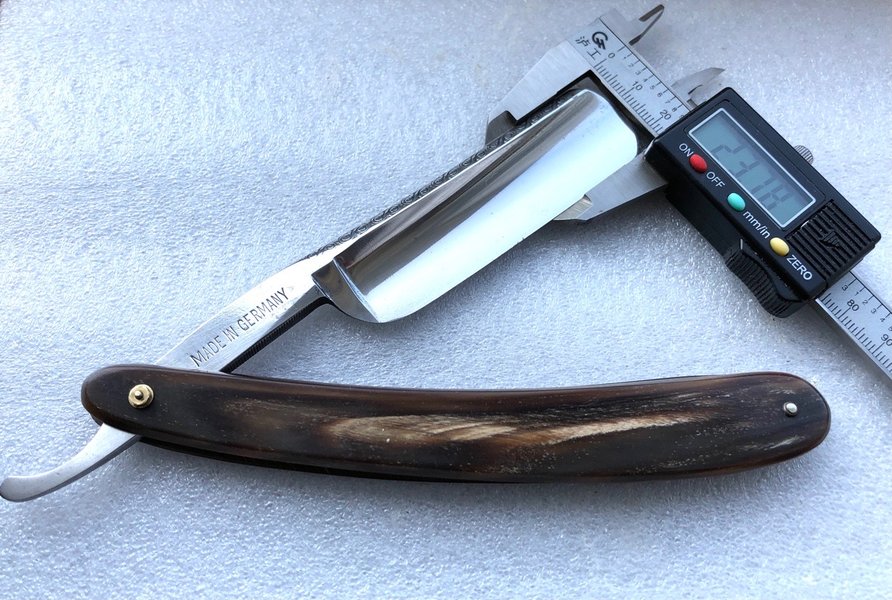 Cleaned up the scales, looking good 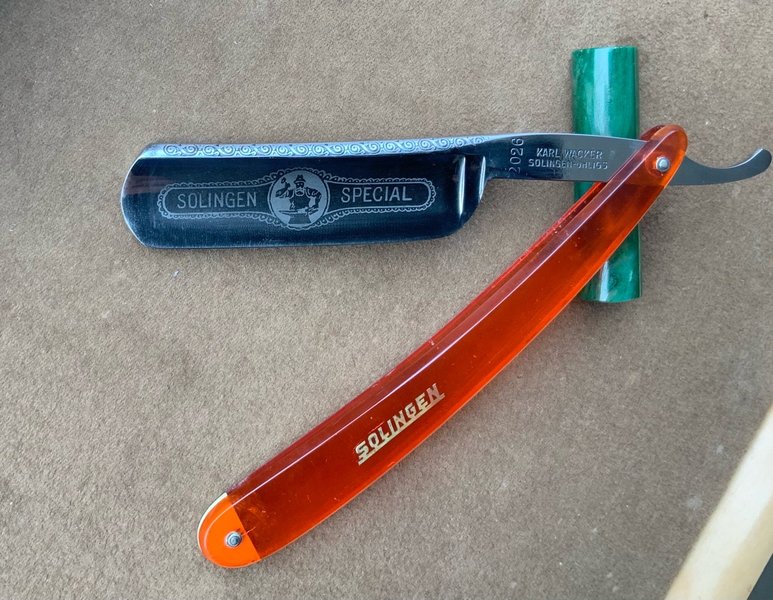 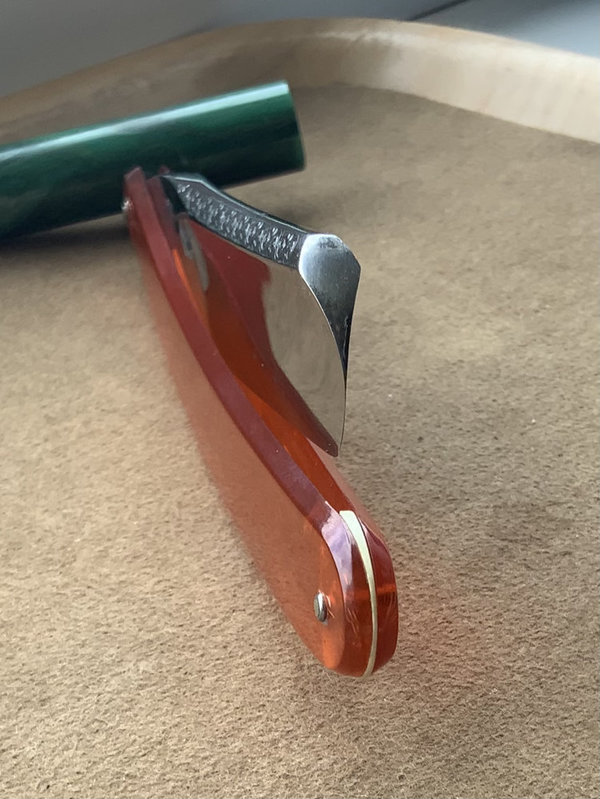 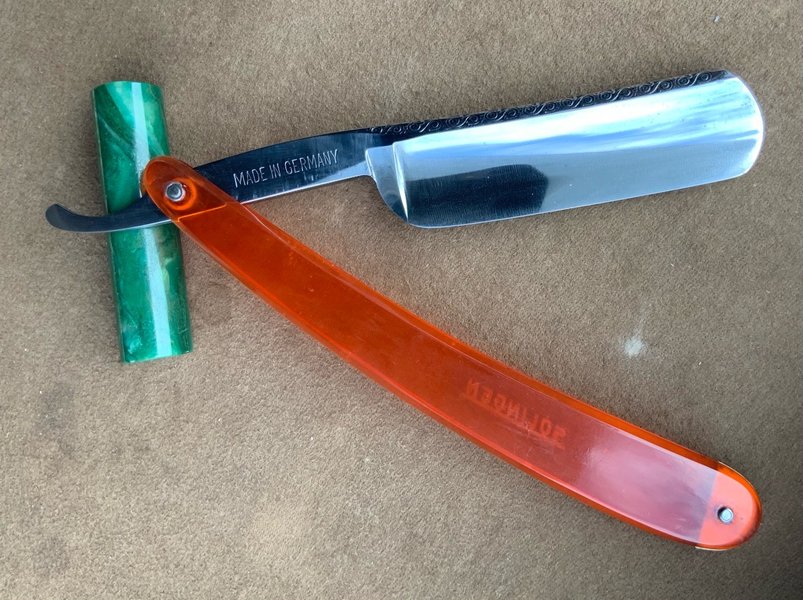