There is so much controversy over this razor and truthfully I am not really understanding why all the fuss.
Yaqi have taken their standard DE89 Closed Comb head and mated it with a "Gibbs Seven Part" adjustment mechanism. The closed comb head design is used by a fair number of companies and the 7 part - Gibbs type adjustment mechanism is also used by a few companies. 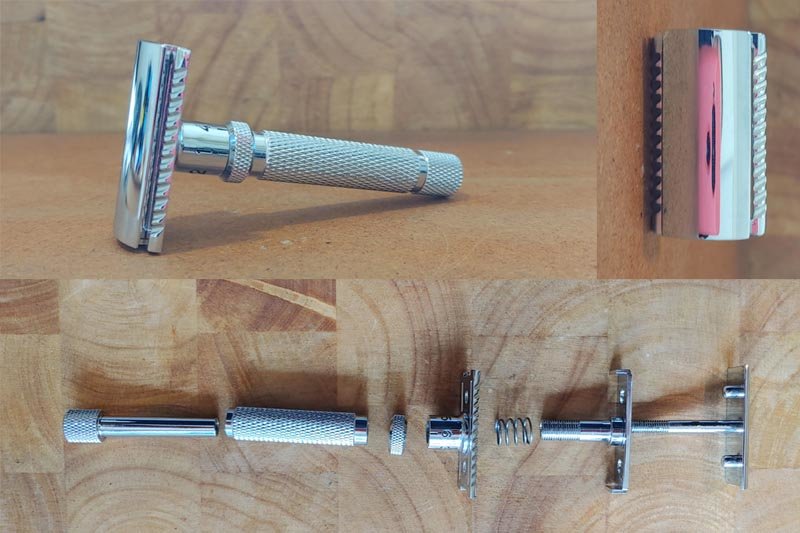 I never managed to get the first version. When I heard that we had a local Yaqi agent I asked him to see if he could procure me one. He couldn't, but put me down for the V2. 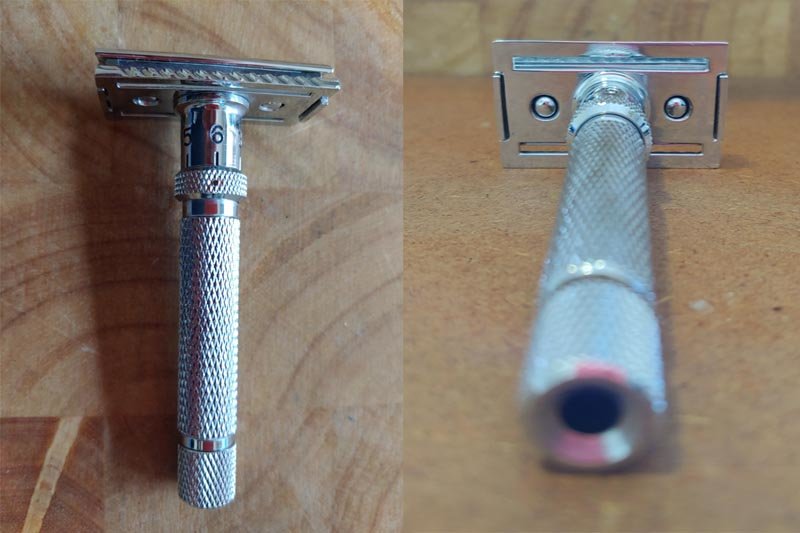 Onto my thoughts on the razor itself.
Its an All Zamak razor and the price point for an adjustable it's great value for money.
The head part and the twist knob are both fine, but the adjustment knob and handle are not.

What's wrong with the handle and adjustment knob.
The adjuster knob is nothing serious at all. They have made the indicator too small and for my eyes it gets lost in all the chrome. Other than that it works as it should.

The handle is their biggest mistake. They haven't fixed the problem that the original (and the Heritage) had. Simply put - you are able to screw the head too far into the handle. All their problems could have been avoided/fixed by machining a stop in the handle itself.
You can work around this by:
1 - Loosen the twist knob and install blade.
2 - Make sure that the adjuster knob is it its most closed, not tight though.
3 - Undo the handle 1 to 1,5 turns and at the same time made sure that the adjuster knob is still loose-ish
4 - Hold the handle and tighten the twist knob.
Now that you have everything all tightened up, the adjuster knob should rotate freely.

How did I know all of this - I have the T-Shirt because I made exactly the same mistake on the first Gibbs Brass handle that I made.

So what did I do.
The thread was a weird size and I ended up ordering taps from China, one of which had to be modified. I turned a new handle with the "stop" in it. I matched the length to the original to ensure that it worked as I thought it would. 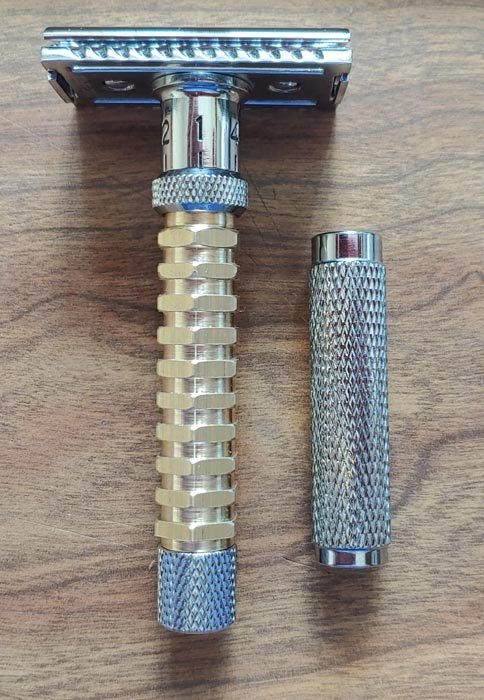 Once I saw that it did, I shortened it, made a new twist knob to suit and two new adjuster dials both with decent size indicators. I generally prefer shorter handles. The new handle is also heavier. I also corrected the calibration of the adjuster dials and cut them back so that it can be over-clocked. Once all the machining work was completed, I lightly sandpapered it and polished it.
If you are wondering, the handle is inspired by a Radimi. 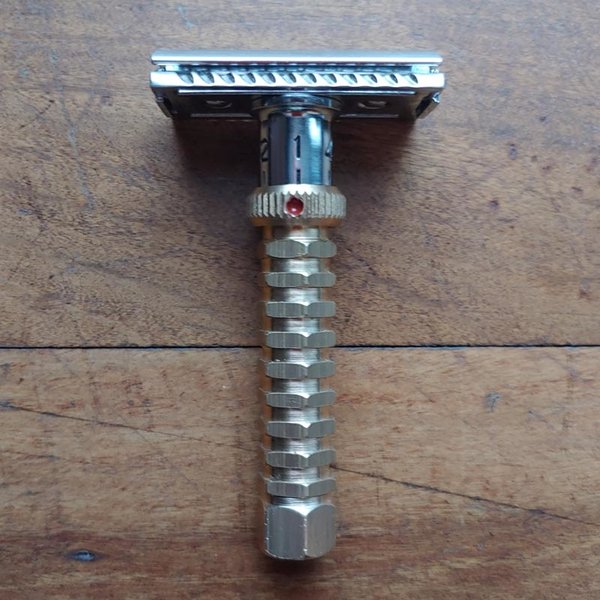 How does it shave:

I find the fixed head that this was based on to be a mild everyday shaver. On the lowest setting this is about the same as the fixed head. When you open up the gap it turns into a pretty decent shaver. I found that it has some blade feel and expected it to be more efficient then it is. There is also a bit of drag but my vintage Personna and an Aluminium Gibbs both have more so I don't see it as a big negative.

Overall, I managed a BBS in 2Passes plus some touch-ups. 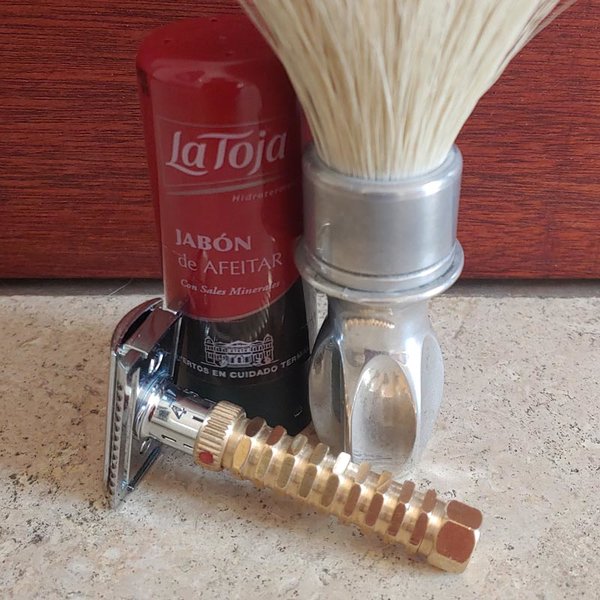 With all the work you put into that razor, it might have been easier to just build one yourself.

Seriously though, I am surprised that a mistake about the numbers got past their QC, or is it that the first three settings is mild to medium, and the last three settings go in reverse from aggressive to medium. I like that last handle made of brass. The one above it still reminded me too much of me carrying around my zinc plated nuts on one bolt when I was repairing my greenhouse.

Moderator
Pre-ordered one from their next run, ships early april. I hope Madhav Metal Industries have not corrected their numbering. I cetainly think it is a less serious error than forgetting an entire productionstep on the baseplate, as happened to a certain US razorbrand.
An’ I don’t need no safety razor, neither.

Madhev is the makers of the Pearl Flexi (which @Clouds has also fixed). Yaqi specializes in zinc alloy and qc errors. As for that US razor brand, not only was the bevel on the base plate missed, but the screw post and handle was tapped for 10-32, which meant that the head could be used on other handles, but the handle could be used only on vintage US razors or on Fatips (yes, I tried).

Version 2 doesn't seem to have any blade alignment issues.

So by making a mistake, you actually selected the better razor - no blade alignment error and all brass.

Of course if you want the numbers to be out of order, @Clouds will get to work on that for you right away.