Finally got the photo's taken and cropped etc. 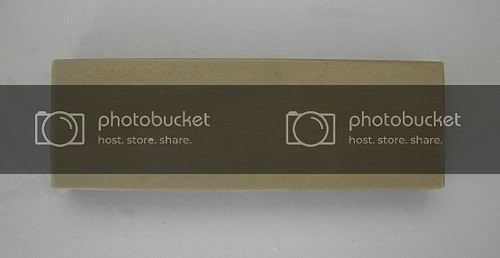 Close up of Orange speckles 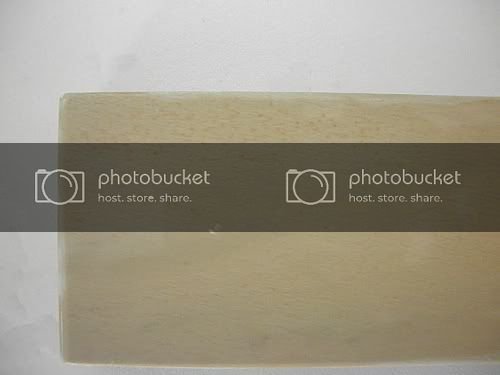 The slurry stone that came with it seems to be quite different: 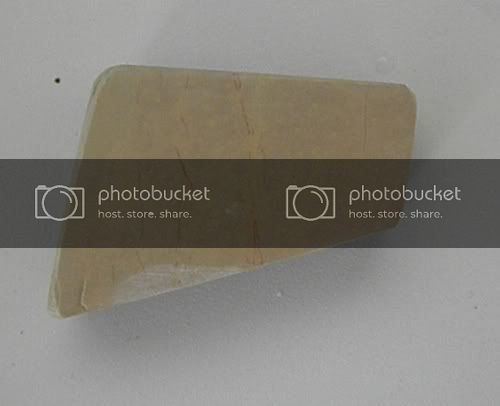 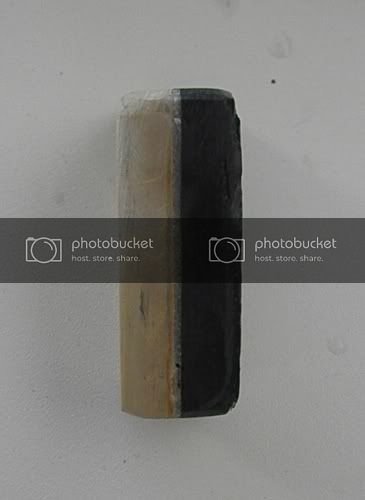 Any help would be grand

The hone is a most likely a La Grise. (compare to
Please, Log in or Register to view URLs content!
)
The slurry stone is a La Dressante, I think.

Thanks Bart. I realise that I took a much closer picture of the slurry stone than the hone somehow. The hone seems pretty featureless really maybe that is what threw me off. Any value to a closer picture or not?

I asked Jarrod for a stone he thought would be suitable a beginner. ie not super fast and not super slow. Looks like la Grise fits in that range(?) I should hopefully get to commence the beginners exercises on Sunday not that I will have a reference point for speed etc.

No need to bother with another picture. I'm fairly sure that it's a La Grise. Jarrod's comments only seem to support that.
La Grises may not get the most attention right now, but they are among the easiest to get a great edge, in my opinion.

Have fun with it,

Still haven't got to play with my Coti yet. Curse this festive season! Bah Humbug!

Thanks for the info Bart.
P

I thought I would post a short update and to say Happy New Year to the board members.

I managed to spend some time trying to learn my coticule over the holidays. Not enough time but long enough to begin the learning curve. I learned that my initial efforts I had the slurry much too thick, I think i have a better grasp of where to begin now.

The razor I began with I managed to get close to setting the bevel along much of the blade. I was getting a TNT response and shaving arm hair, although not easily. Unfortunately I revealed some bad pitting on the edge near the heel which looks to be beyond my small skills to hone out without potentially damaging the razor further. That section certainly provided a different TNT feedback!

I have another razor to begin again with which I hope to try this weekend. I also feel like my stroke is coming along so I will try to touch up one of my shaving razors which has started to fall away in it's performance slightly. I have touched this up twice on a cromox balsa strop. Can someone advise if this will have made a coti touch up not feasible?

Thanks for the update. :thumbup:

I think the touch up will go well, if you give your Coticule 2 rubs with the slurry stone. Don't do anything more, even if you think you don't see any slurry. Use enough water. Perform about 30 X-strokes. Use enough pressure to guide the razor comfortable over the surface. After that, rinse hone and razor well, and repeat the same on clear water. Strop the edge well after this "power touchup", 60 laps on linen and 60 on leather.

Thanks Bart, I will proceed as you have recommended.

I will surely advise my success or failure on the touch-up. Hoping for success, prepared for failure

I'm really looking forward to seeing how you progress. I have a soft spot for this particular variety of coticule. Someday when I have offspring to pass my things off to, I think I will give my La Grise to the thoughtful and patient one. These are not the fastest of coticules, and the feedback they provide will require you to put extra patience and consistency into your stroke, but the extra attention pays off. I think they reliably give a good finish if you are patient and not heavy-handed.
P

Okay...I tried the touch up as per Bart's instruction and now I'm a bit confused...

The sharpness seemed to increase as the razor was improved in cutting through the upper lip and chin whiskers. The flip side was I seemed to lose some of the smoothness of the edge. It felt rougher to the skin than I have had previously from this razor. Looking through my notes from Larry this razor was finished on 0.25u diamond on felt and I have subsequently used the 0.5u chromox on balsa a couple of times.

Any tips on what might have happened and how to proceed? Should I repeat the exercise, finish on the chromox for now...??

Thanks for the extra information Danjared.

I have brought my coti to work and my second razor. I will have a play during my lunch break
G

Tell ya what I stopped using diamond paste all together because I felt it left a rougher blade like you describe. I seldom even use CrOx anymore.

Have you checked the blade for microchipping? If it's feeling rougher, I would suspect this as a possible reason.
P

I don't have any magnification...is there another method to examine for this?

Is it possible I cooked the edge on my last Crox touch-up? 10 laps on the Balsa might have been too much
...or I used too much pressure on the coti? I was trrying to be light as a feather but I am a nooba.

I shaved with the razor since that Crox touch up though and it was still smooth.

Did you try doing a "touch up" with the chrome oxide to see if it reverted to smooth?

No I had to run to work after this mornings shave I shaved straight off the coti touch up and the linen/leather stropping as per Bart.

I can hit the razor with the Crox tonight/tomorrow and check it for the next shave. I'm only shaving every second day atm...sometimes I really wish the hairs grew faster! I will report back presently

Ah, well let us know how that goes.

I wish I had that growth problem. My hair seems to grow back rather quickly and at weird angles. I also believe that unlathered hair can actually be as hard as copper wire. I once got a splinter from a dry, shaved hair. I thought it was a piece of metal until I looked closely at it!
P

hehehe the grass is always greener on the other side of the fence.
I could shave daily but I'm acceptable almost until the end of the second day at work. We are pretty casual though.

The hard part is the 30 minutes it takes me to shave with the straight. As I pull that time down the wife will likely not wig out so much about disappearing for too long into the bathroom!
P

Okay...not sure if I should start a new thread for my honing discussion...let me know what the preferred etiquette is here and I'll go with that.

So I had a crack with my coti on another razor yesterday after lunch. Dulled it on glass and went at it. On the plus side the razor looks to be good and not suffer from any edge pitting like the first one did. I slurried up and started making some half stroke sets @ 30 a side. Or close to it, I seem to have trouble keeping count and concentrating on my form

: 3 sets and I was getting a TNT response over most of the edge but shaving arm hair was poor. My slurry dried out while I was assesing this so I washed the razor and the hone and reslurried.

Another couple of sets and I was getting closer but then I let my slurry get a bit thick and went backwards. I tried to recover the slurry but added too much water i think as I wasn't making any progress so I washed down everything again and reslurried. I did another few sets, made a few bungled strokes, another couple of sets and decided to quit as I was losing concentration.

The end result...I realised I have no idea how well the razor should be shaving arm hair to indicate the bevel is set. Should it be knocking them down super easy or is just some cutting action acceptable? I think I have the last inch of the razor set or close to it. Arm hair is cut easily but I would still say it misses or does not cut every hair it contacts. As you move toward the heel, the razor is still cutting hair but it is quite patchy. When the bevel is set should it cut arm hair as easily as a shaving sharp razor? If so I still have a ways to go I think.

I can't tell any difference in the TNT respose along the blade. It all seems to have a uniform light, even drag to me but the cutting performance is obviously different. I am reading about the TPT today and will see if that reveals some more information to me.

So today I am going to try again to set the bevel on slurry. Any tips or pointers? Should I be altering the set count from 30 and how many sets should I go for as a minimum? Also should I redull the razor before I begin?

If my memory serves me well, it's been asked and answered several times already and it was also my dilemma some time ago.
The replies I recall were: Don't try to shave your entire forearm during the test. Just select one hair and try to cut it off at the skin level. It should come off without a drag. Repeat the test along the entire edge.
P

I just had a session on the hone and think I'm at the right point to start the taped section of the unicot. I think I have improved the cutting action all along the edge to superior than I had yesterday at the toe. i used the marker test and I think my stroke was pretty regular.

I wish you had been out of bed a little earlier! I have mowed down half the hair on my arm already

: Too much fun watching the razor I have been honing from blunt knocking down tufts of hair easy as you like.