It appears that all of my innovative English made razors come from Sheffield. This is the last in my collection, and probably the most innovative, the Eclipse Red Ring. It was made in the 1930's by James Neill & Co., which also made the Neillite 400 bakelite razor.

The Red Ring was unusual in that the pins that held the blade was on the base plate and there were holes in the cap to secure it, similar to the Knockout. The guard on the base plate was very much like an open comb, however there was a bar across the bottom that held it together. The most unusual feature of the time was that this was a partially adjustable razor, where there was an arrow at the bottom of the handle and markers on the knob so that you could adjust the tension and gap of the head. In most cases, this would allow of a difference of about 1/2 - 1 dial setting on a Progress. There was also a magnet at the bottom of the knob to make handling the razor blade easier, a feature most recently seen on the special edition FdR Merkur Progress.

The razor was also visually distinct where the cap had a Solar Eclipse stamped on it, and the handle had "Eclipse" and "Red Ring" molded in the knurling. Of course there was also the distinct red ring on the bottom portion of the handle, which mine no longer has.

Shaving with the Red Ring is a pure delight. The comb actually works well and the adjuster is just right for a two pass shave. 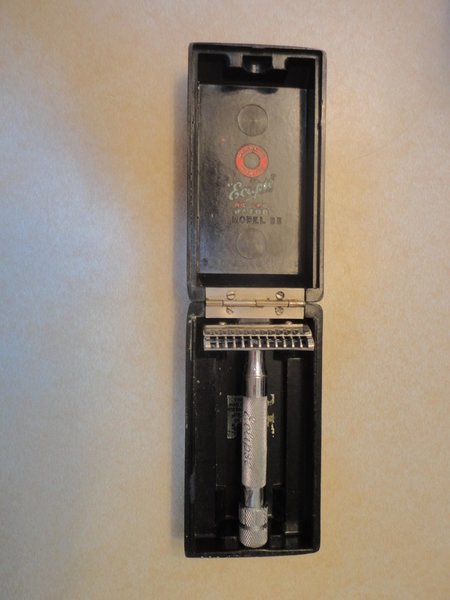 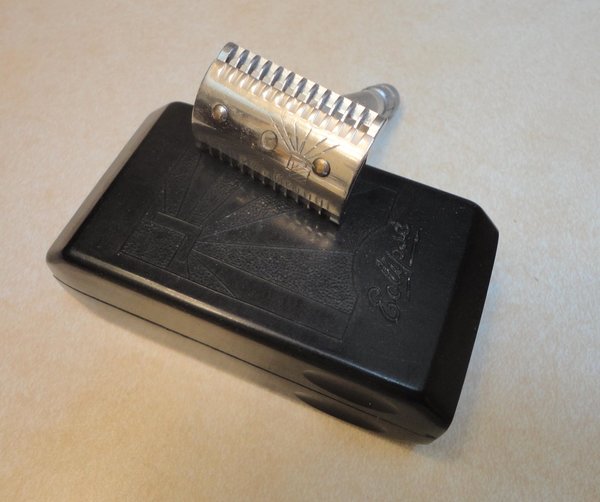 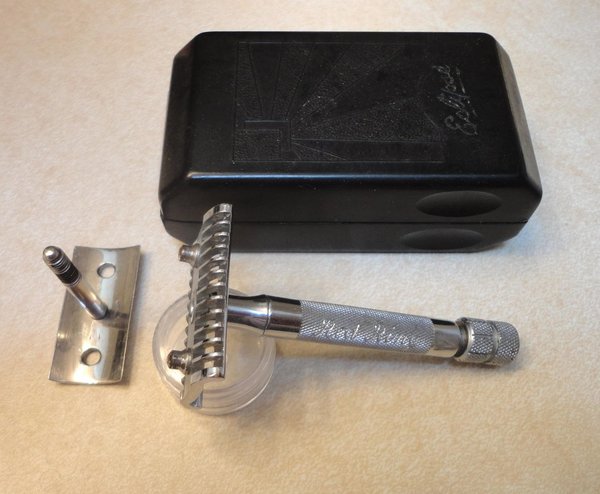 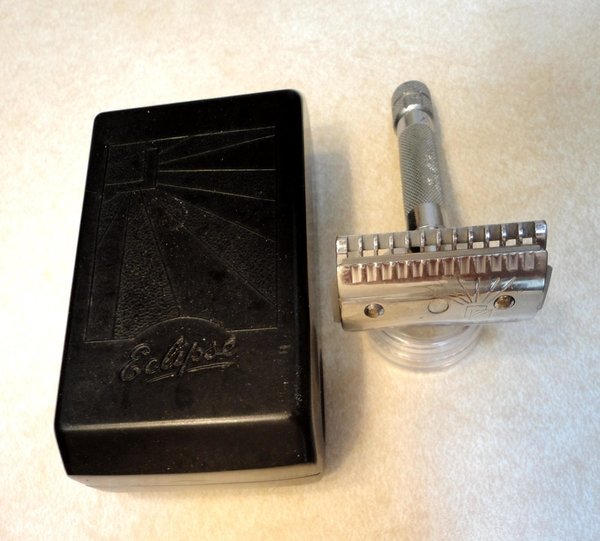 Very nice pictures accompanied by a nice explanatory text, thanks.

With every visit to a clutter or Brocante market there was always the hope that a Red Ring or Darwin would put among the clutter which I would get from the unsuspecting salesman for a bargain price.

Unfortunately, in all those years of visiting markets, I have never been that lucky.

Where I live, there is no such place. You might find a Gillette Tech with a cracked handle selling for $40, but the hopes of finding that shiny Gillette Toggle for $5 is a dream. I have to rely on eBay for my shopping hoping to find an unsuspecting salesman AND bidders.

Moderator
SU-Patron Gold
I actually did find my Eclipse on a flea market for under a tenner.
Cheers!
Richard

You must be lucky that there is a guy or girl who sells them but has no idea what they are selling. In the same way I also came to a scuttle .. they also asked a small amount, I finally paid a little more because I could not get over my heart. they had used it as a flowerpot.

Well this one was more than a "tenner" -- but not as outrageous as they sell for on the forums and auction sites these days. 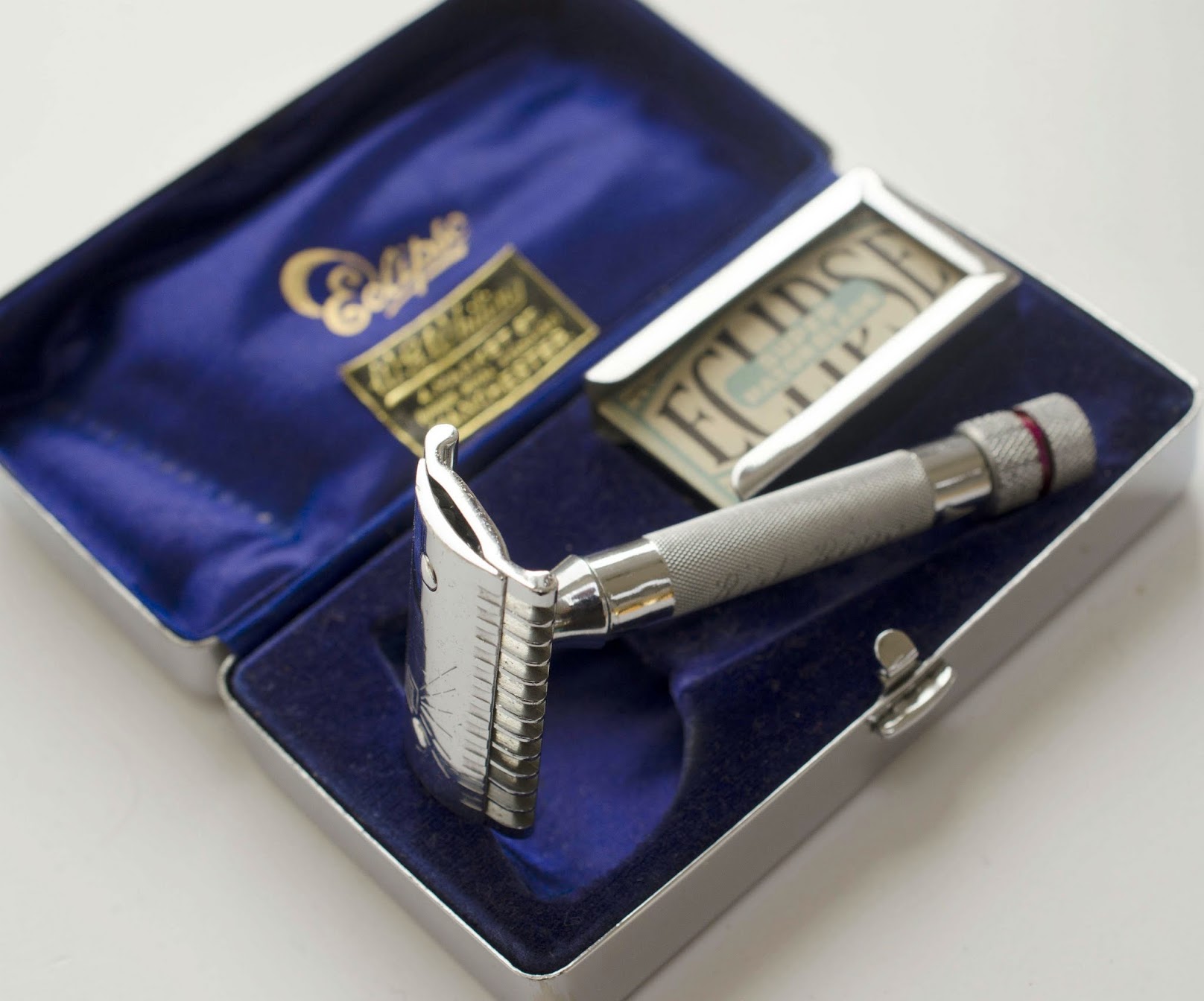 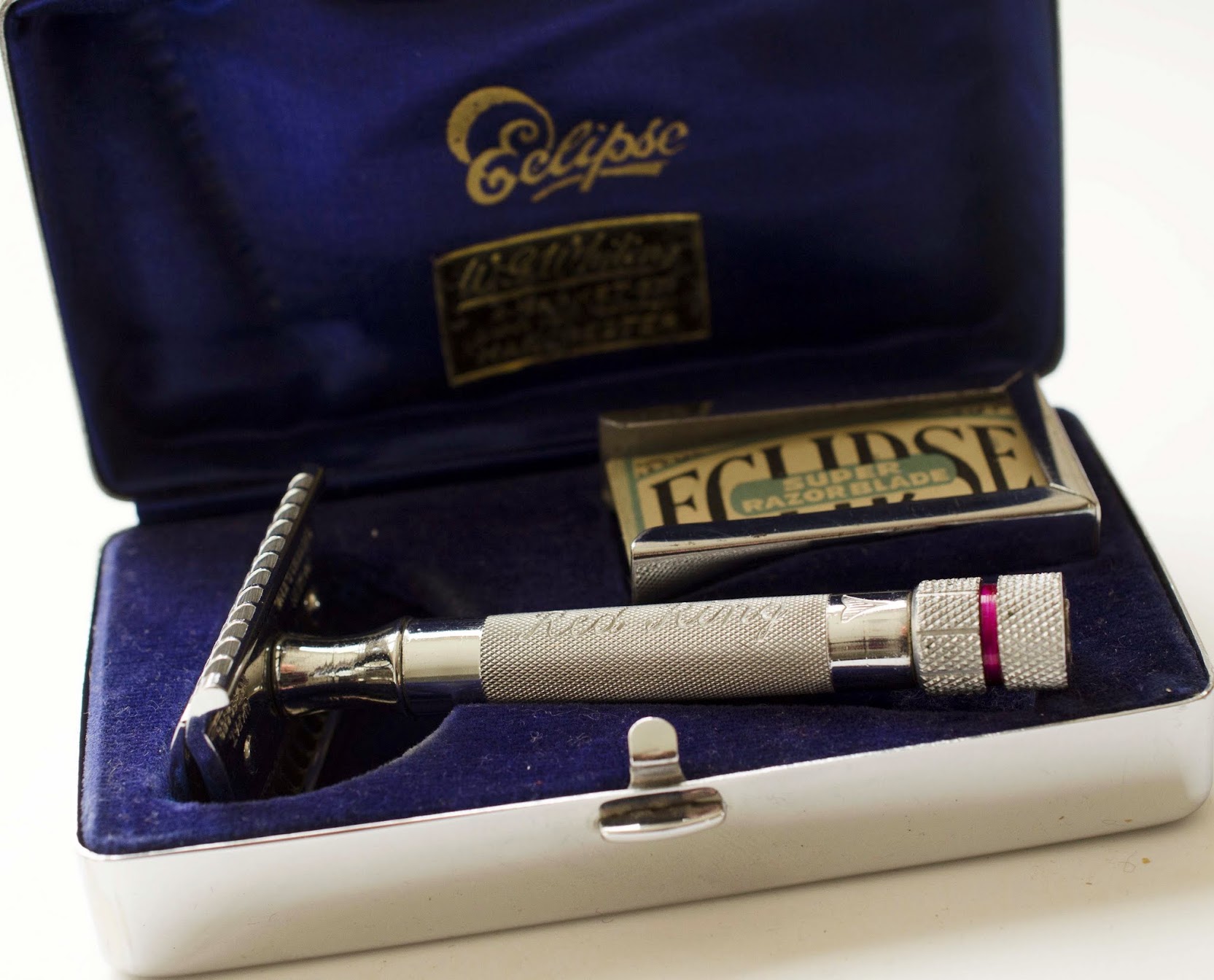 Not only the case. The Red Ring looks wonderfull...

I did not know it came with a metal case. All examples I seen was with the brown bakelite case. I also did not realize the red was so deep.

What a beautiful Red Ring seems to be completely new.

I too have one with the Bakelite case -- that's also missing the "red ring." Not sure what the deal is with that. 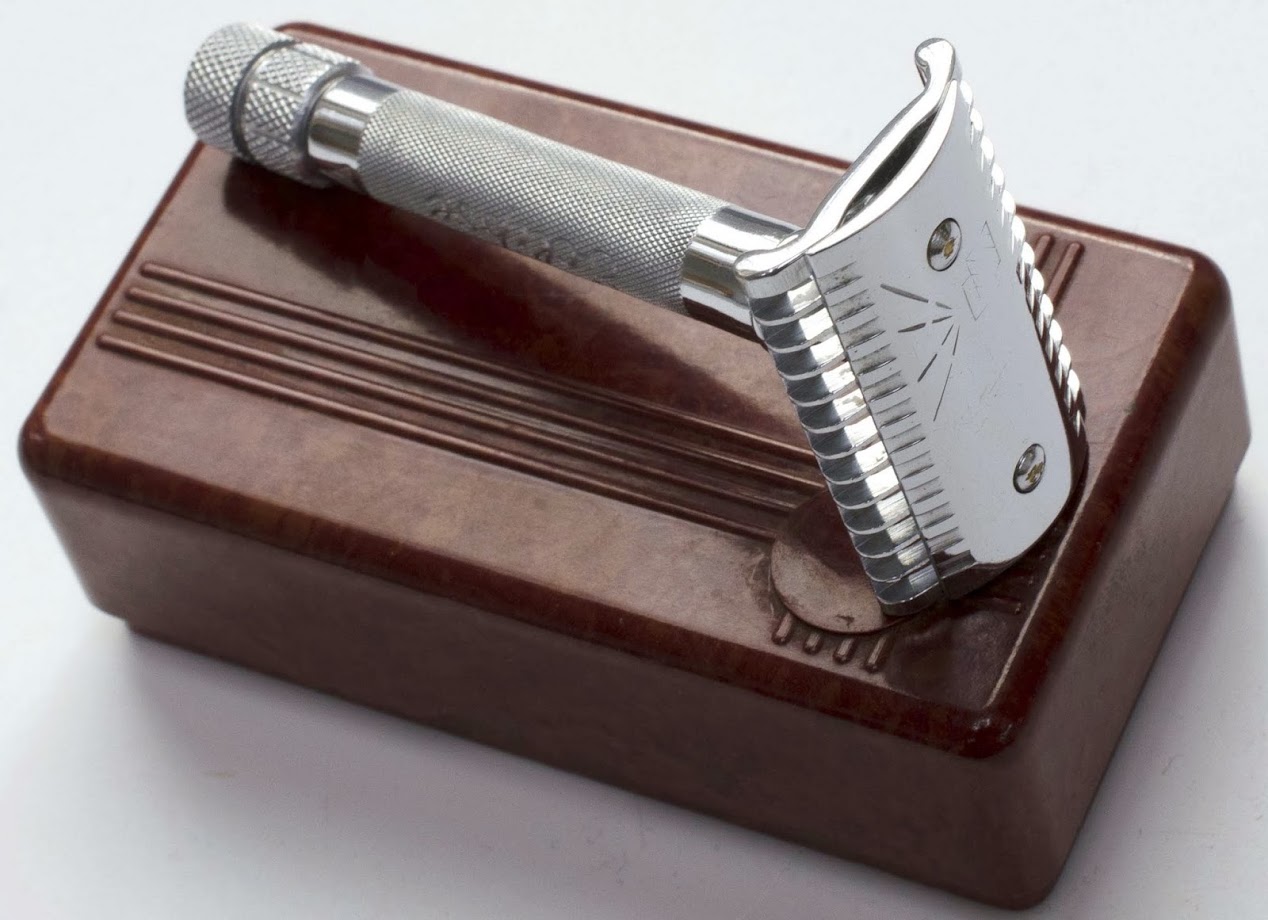 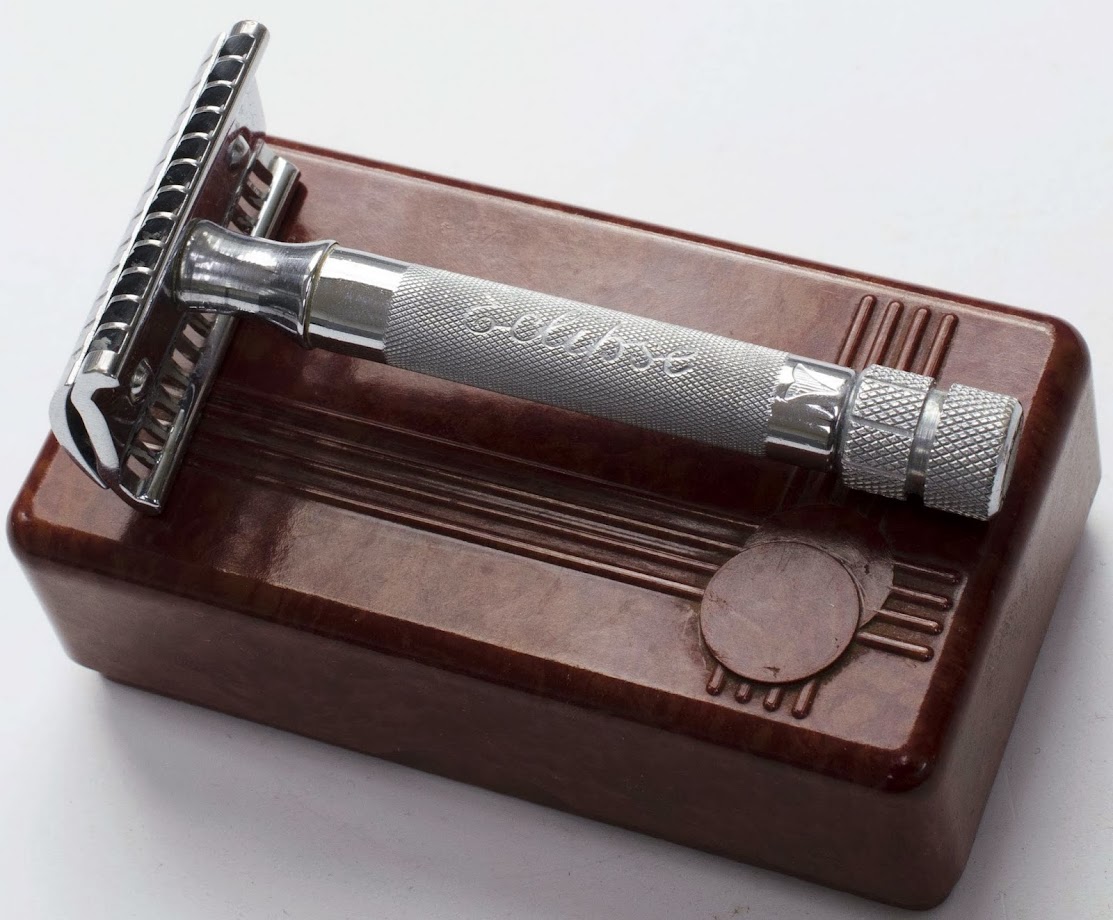 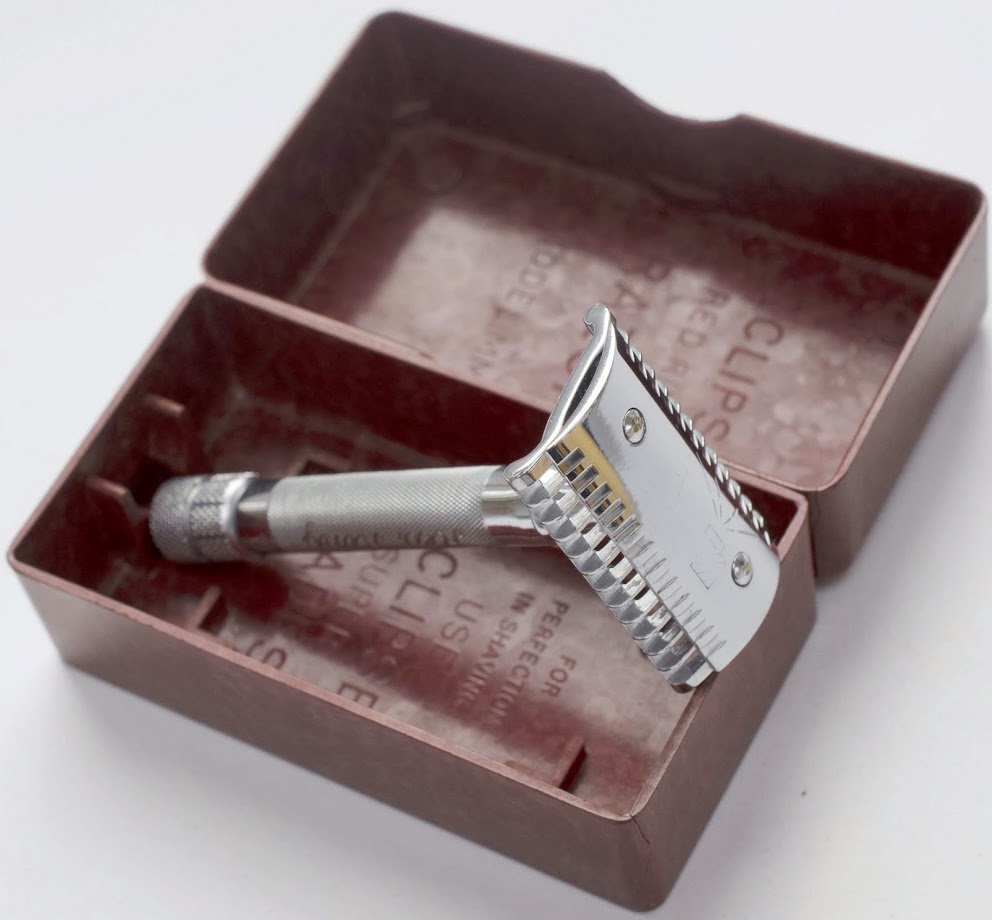 Have you seen these cool Eclipse advertisements? 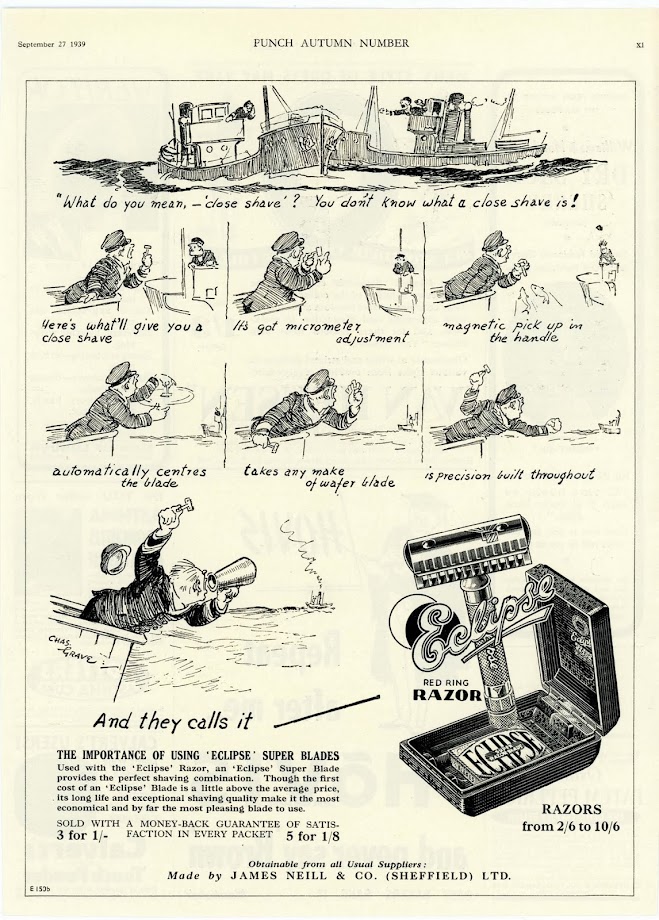 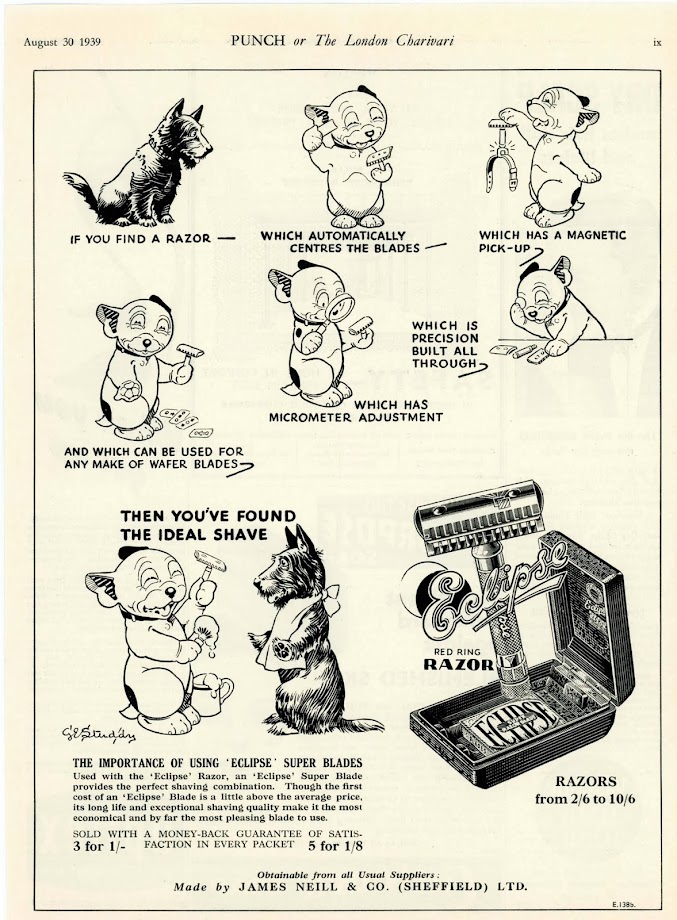 Those were the days!

And just to keep the study of the Eclipse variants alive, here's a model (I no longer own) in a soft leather travel case. Seems like someone (not me) tried to touch up the red ring with some modeling paint. 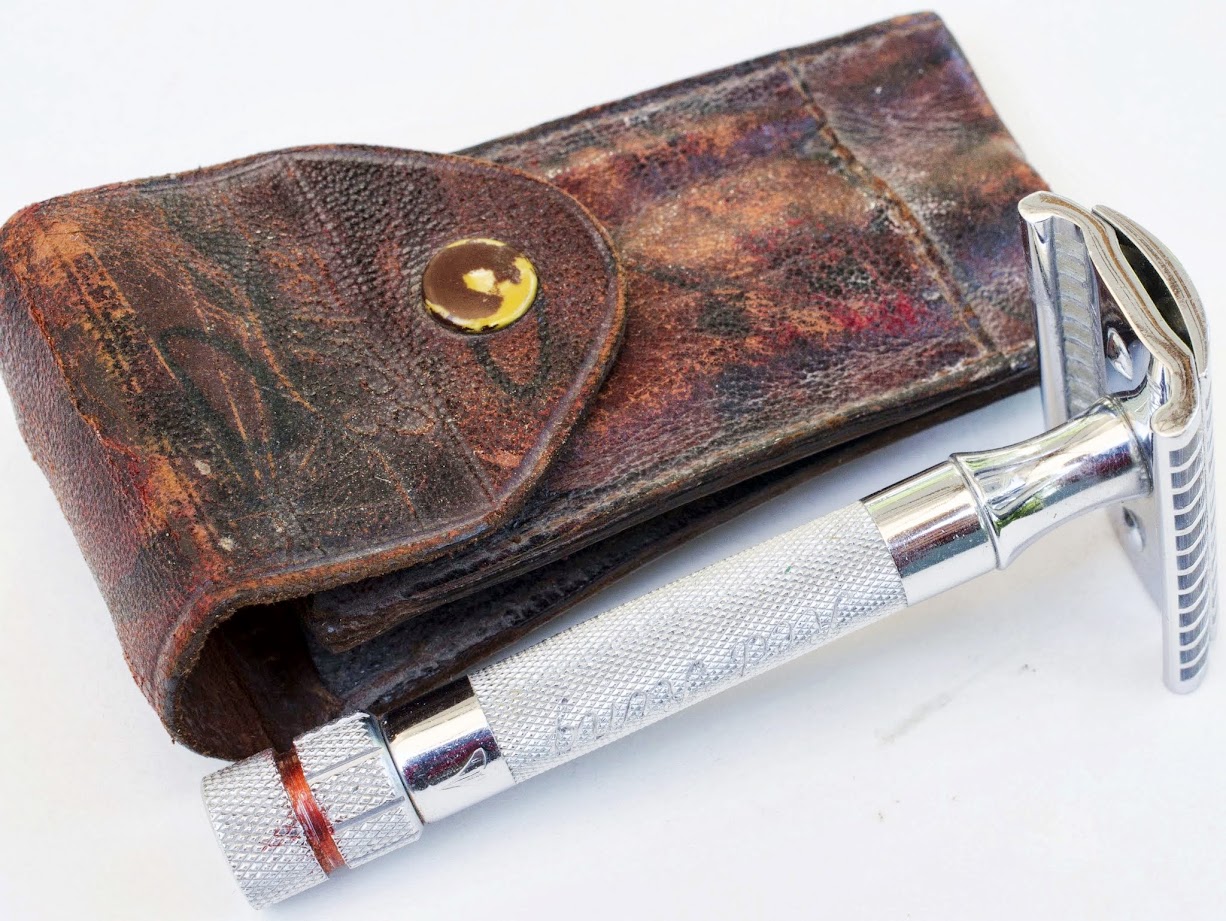 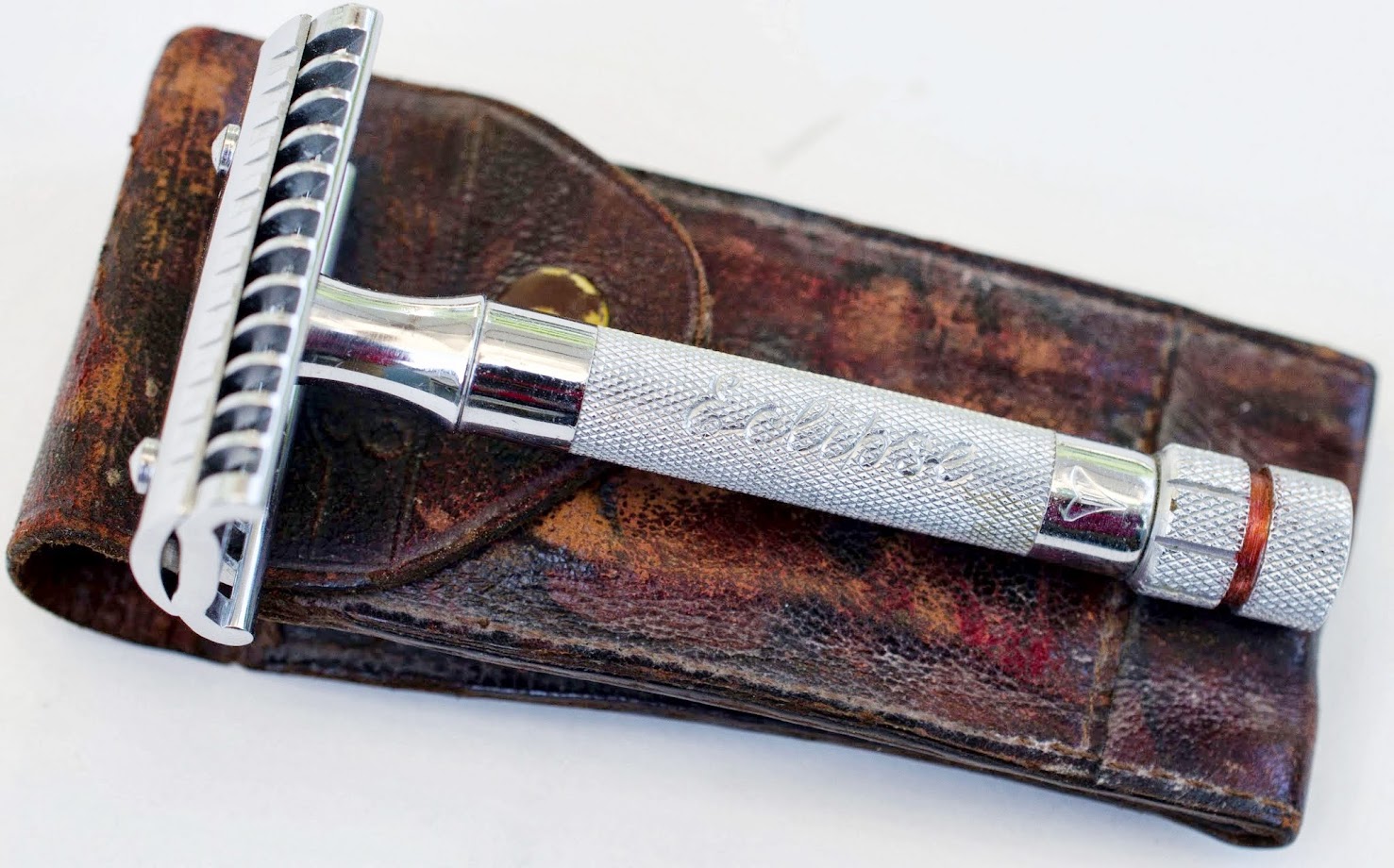 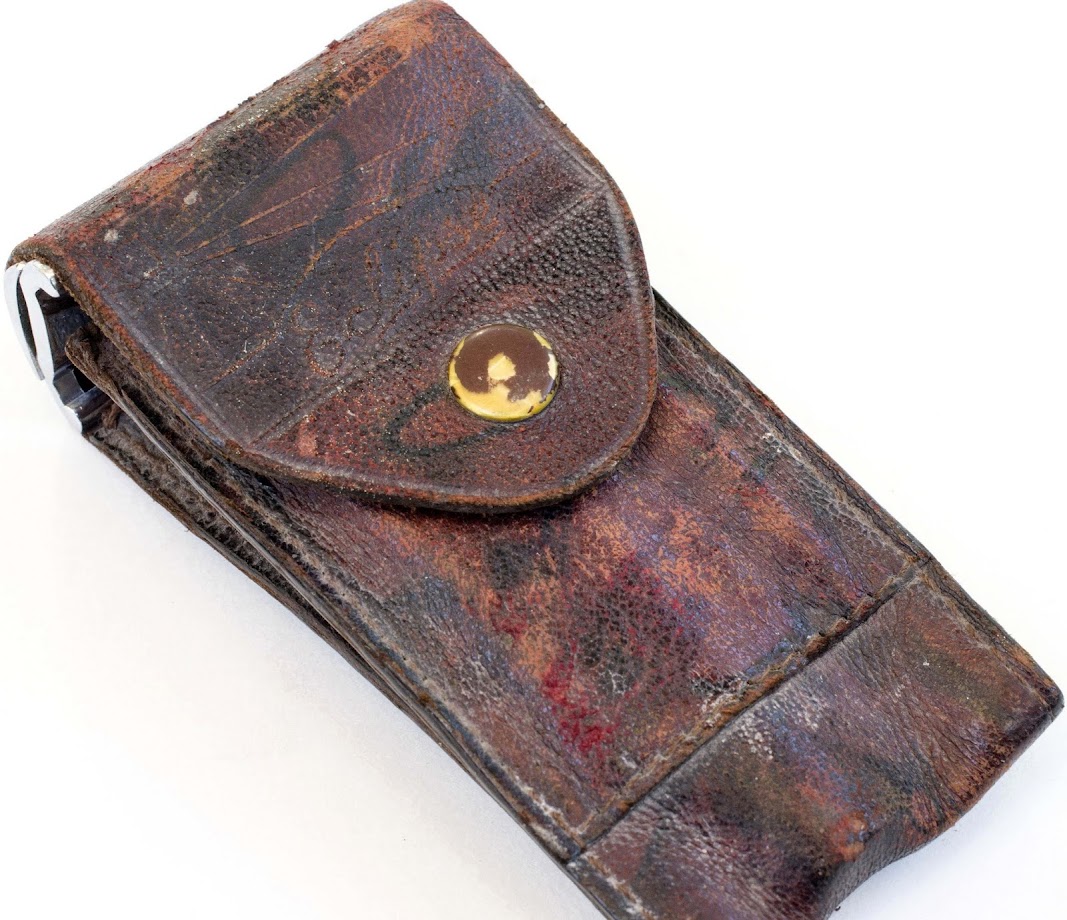 Others? Want to chime in also?

Moderator
SU-Patron Gold
My Red Ring is in not as good condition, has plateloss on the head, however is interesting in that it does not have the stylized sun on the topcap. O, and has a different case.
@Jake apparently they were made without an actual red ring as well. 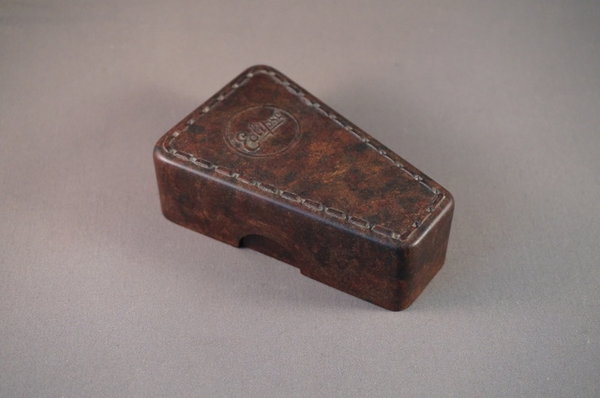 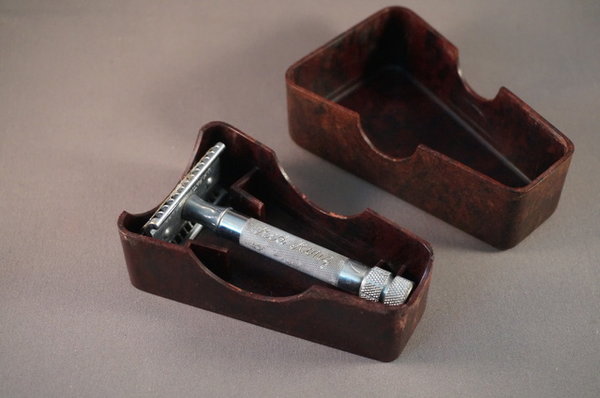 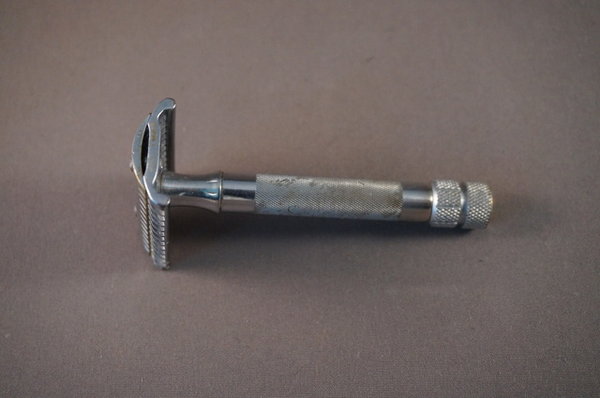 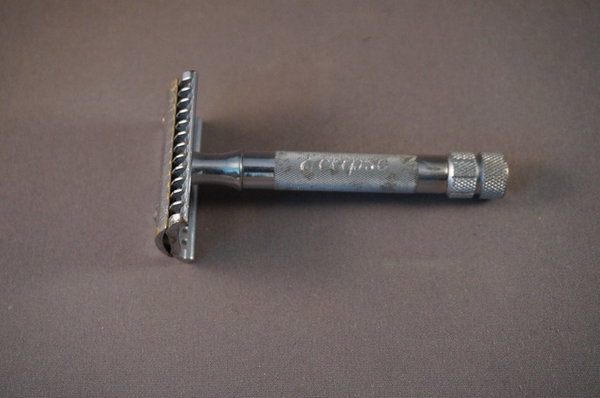 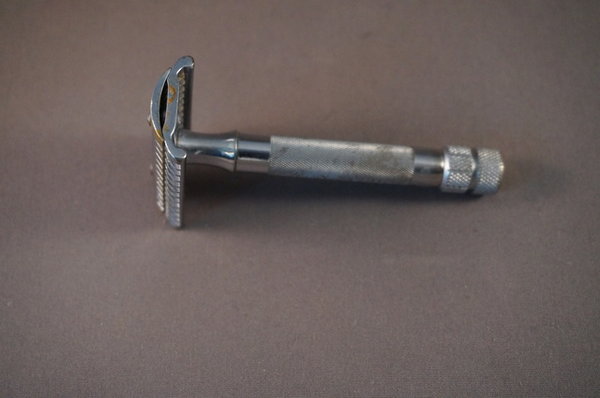 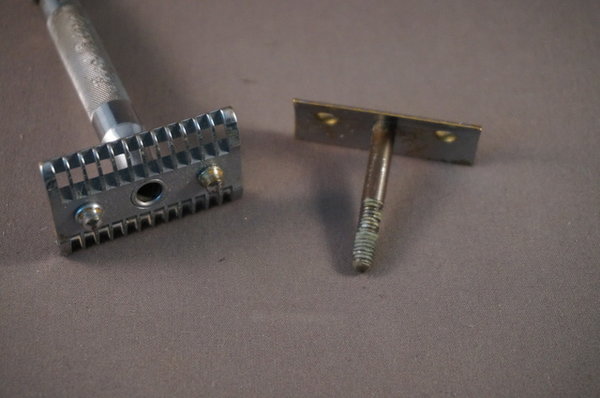 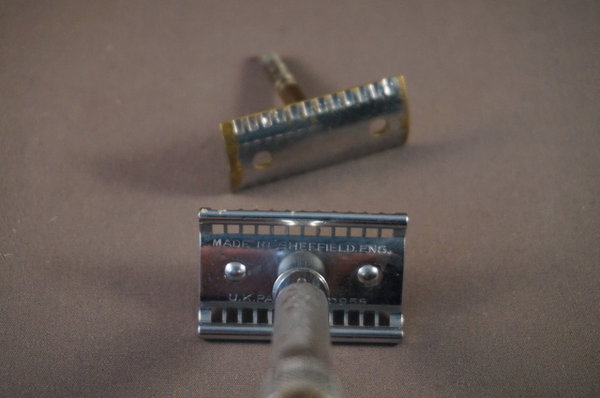 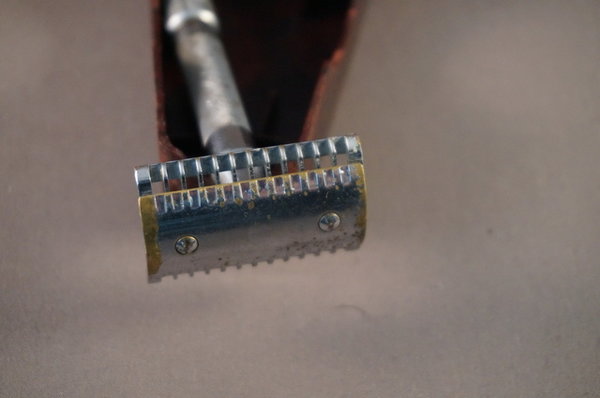 Eclipse No Red Ring I guess. How do you like its shave!

I traded my Red Ring, for me the shave not as nice as it's looks ...
When I bought it the red paint was still complete but when it left my house there was a little chip of paint missing. the paint is easily damaged.

Not me! My red model paint is only for my Progress and black TNNSER.

Yes, my exact impression as well. I did once get a chrome model replated -- over zamak. The company (in Providence, Rhode Island) did a fantastic job, but they reported that it was not a trivial replating project. And although the magnet at the bottom of the handle seemed to be consistent, the red ring and the embossing on the head seemed to fluctuate with some marketing (or technical) variables.

My experience is also that, despite the cool factor of the design -- that the shave is sub-par and quite aggressive. Those who rave about the great shave they've experienced with the razor must be biased due the high price they likely paid for the set. But as with all these subjective experiences, YMMV.