Les Latneuses (?) with a special surprise.

So I got the Les Latneuses I ordered from Ardennes coticule. It had some little surprises in store for me.

The first was the back side, the "hybrid", was maybe the hardest stone I've had to lap yet. It took more than three hours on a 400 grit diamond plate just to get the cutting marks out of it...really freaking hard.

The second surprise was even less pleasing. 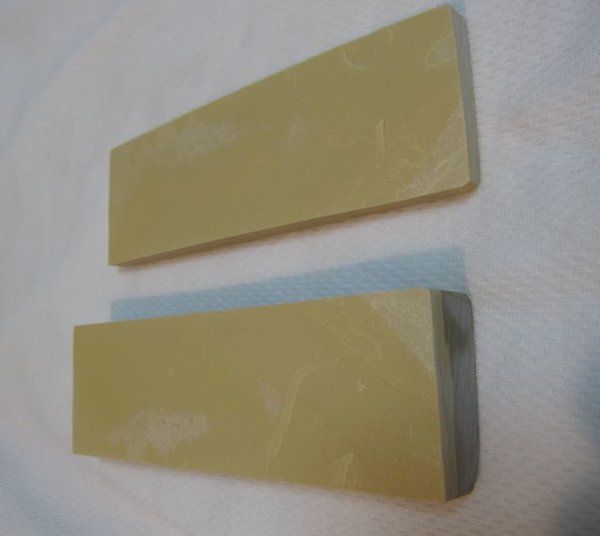 The top half of the coticule side just came off when I was taking pictures. I assume that there was a crack from before, as the inside was wet--the last lapping session was this morning.

So that's not really what I'd call optimal. Any suggestions? And is this stone really a Les Latneuses? Bart seemed to think there was some confusion when he was at Ardennes and no one has said anything about how freaking hard the back side is yet.

Maurice from Ardennes is a really nice guy who takes pride in what he does and responsibility for what he sells. If you contact him, he will surely work out a solution that will satisfy you.

It looks as if you got 2 hones for the price of one!
The best option is to contact Ardennes, they will take care of it. Based on the first picture I don't think anyone could have predicted that the top layer would separate.
If the fit is tight you can glue it back in place with CA-glue, in case you don't want to bother with returning it all the way to Belgium and waiting for a replacement.

Concerning lapping: the hybrid side of a Les Latneuses is quite hard. Furthermore, Coticule garnets have a way of smoothing out diamonds rather rapidly. Your 400 grit lapping plate will be pretty smooth by now. By the way, the hybrid side of my Les Latneuses still carries Ardennes semi-circular lapping marks. I use it as is, with excellent results.

While we were at Ardennes, during the shopping moment, everyone was showing me Coticules, asking for my opinion. All I could do in such a limited time frame, was to run a test razor over the hones a couple of times and for some basic idea about honing speed and feedback. There were a few recently mined Les Latneuses that surprised me because they more felt like La Nouvelle Veine. They also had the for that layer characteristic faint blue lines showing up a the side of the Coticule part. Wim and I looked in a box with older bouts and found one that was probably mined a few months earlier. That one was more on par with the Les Latneuses in the Vault, and during a quick side by side comparison, it was obvious that the latter was faster, and had a louder and more granular feedback. The hybrid sides of both hones responded about the same. I repeat that it was just a quick assessment. Maurice was way to busy to talk to him about it, I had to leave to go buy vegetables for the BBQ, and when I returned, Maurice has already left. I have only spoken briefly to him on the phone since then, and have not asked about these "different" Les Latneuses. It can very well be natural variation within the layer, in which case I have more testing to do. I have here a
Please, Log in or Register to view URLs content!
that includes a diagram of the Ol'Preu quarry. Les Latneuses and Le Nouvelle Veine are adjacent layers. Maybe at certain depths they run close enough to be mixed up? That is just a wild hunch of course. On the other hand, the layer is named Les Latneuses, in plural. The book says: "Les deux Grosse Latneuses, 1.5cm/1.5cm de phylade/1.5cm". This means "2 Les Latneuses, both 1.5cm wide with 1.5cm of hybrid in between. The book also says: average distance between Les Latneuses and La Nouvelle Veine: 150 cm. That make the hypothesis that we're dealing with 2 slightly different Les Latneuses (of which I coincidentally might have only tested one so far) more likely.

But once again: I need to talk to Maurice about this, and I need to assess "the other Les Latneuses" properly.

Indeed, I have no doubts about that, but I'd really rather not put us both to the expense of time and money. I still have usable coticule parts, and the back part was my primary interest anyway. So what I was wondering is, should I try to glue the parts back together, or try to find a suitable backing for the coticule part and glue it?

Any suggestions on the practical side would be appreciated.

And, of course, I'm curious as to the stone's provenance.

Ahhh, Bart's reply came in while I was responding to BlueDun. Thanks Bart.

OK, so the hardness is normal, thanks for the confirmation. If the back sides perform the same, then it doesn't really matter...like I said, the back is the thing.

I think I'll try CA then. I'm kiond of worried about the coticule slab getting broken before I get a good backing on it--my Hone table is kind of a disaster zone right now.

You might check and see if there is any difference in the performance of the 2 separated hybrid pieces. If so, you may indeed have an 'extra' hone.

Personally, it looks like you have the perfect opportunity to make a fine paddle coticule, as some of the vintage examples. I like these very much esthetically.

Bart, I purchased one of those Les Latneuses you thought felt like La Nouvelle Veine on top. Unfortunately, and I feel bad about this since you have mentioned this a couple of time, I have been learning a couple other stones exclusively.

It's also a bit of a jewel in my cupboard ... sitting there waiting with pleasant anticipation . But anyway, I'll give a write up on it when I finally use it and feel I know what I'm talking about.

Jim, could you take a picture of the hybrid side? It may be my monitor, but it looks very blue.

my hybrid side is harder. i never though of that lapping with diamond plate would actauly smooth the diamonds out. My dmt325 seemed to wear pritty quik . I'll bet my coticules have caused that. i will use wet and dry from now on. i'd want a replace mant if it was mine.

jim is the coticule yellow side ok if you relap it smooth, and be usable . it looks like you have quite a bit left.i had slurry stone that did the same thing. i just lapped it and it was smooth nice surface again.

That is indeed another excellent option. And as Torolf suggested you could glue the remaining piece to a wooden base. I would do that upside down, because the flat side offers already a good surface for gluing.

How large is that Coticule?

Guys, thanks for your input. I'm not going to ask for a replacement, if only because it would mean investing another 3+ hours of time lapping a stone.

The paddle coticule is an interesting idea, and I have the means to cut wood...interesting.

Thanks Jim, I wanted to know to get some idea of the remaining thickness of the Coticule. What's left of Coticule on that stone will almost certainly outlast your lifespan (with my sincerely wishes of a long and prosperous life for you and your loved ones). So I would definitely find some other use for the separated part.

That said, I would still contact Ardennes. It's best if you go through Rob, he speaks English very well. Show them the pictures or direct him to this thread, and inform them of your plans. That way they know there was an issue with your stone, and it would safeguard your claims should there be future trouble with the stone. Not that I expect any further problems, but you never know.

Concerning lapping: the Lapping plate at Ardennes is incredibly coarse. I estimate the grit to be less than 40. It's understandable, because labor costs are such that they can't afford to spend 3 hours lapping per Coticule (at 55€ per hour, because that's what a laborer costs in Belgium). In the old days, there was an extra step called "Le Polisage". It was mainly done by women, who used a special kind of extremely fine sand to smooth the surface of the finished Coticules. Now it is left to the owner, whether he does it immediately, or waits till normal wear from slurry sessions has taken care of it automatically.
I have yet to find any adverse effect of using the unpolished surface as is, albeit it can have some influence on the feedback that a stone provides. But I understand the desire for a nicely polished surface. On a soft stone that isn't difficult, and it can even be done with just a slurry stone. But on a hard one, it can require some serious sanding, and you really must play it buy the rules, which means 40-80-150-300-600. It will go much faster than jumping from 40 to 400. If you think about how long it'll take to sand 40 grit scratches, with 400 grit sandpaper, out of a wooden surface... And we're sanding a solid rock. So next time, do yourself a favor and start on 40 grit. You'll be done in a fraction of the total time and your nice diamond lapping plate will thank you for it.

Is that a misprint? If it is not, then I might seriously consider moving to belgium. :thumbup:

You'll reconsider when you hear about our tax rates :cry:

Oh? Have you seen the minimum wages in the US? And our low tax rates couldn't begin to make up for it.

That's sad indeed. I don't want to start a discussion on this but imho everyone who has a full-time-job and is working hard should make a decent living.

55 EUR is what Maurice told me, and it's consistent with what my boss tells me I cost to him.
Obviously, that is not the amount the laborer takes home. In Belgium an employer has to wire more or less half of an employee's wages to the state. Hence, if you pay a laborer 15 EUR per hour, it costs you 30 EUR. That sounds like a lot of taxes, but let's not forget that health care and schools are almost for free in Belgium, next to a whole bunch of other social benefits.
On top of the 30 EUR, the employer must insure the laborers against the dangers of the profession and the possible loss of income. I can imagine that not being exactly cheap in the mining industry. And I reckon he also brings the tools they use into acount. They don't have to bring any tools from home...

By the way, after the state takes half of our income, we still have to pay 21% VAT on the majority of things be buy, and considerably more on petrol. Currently we pay about 1.50 EUR per liter petrol, that's 5.65 EUR/gallon. But as said, there's a lot of social security in Belgium.