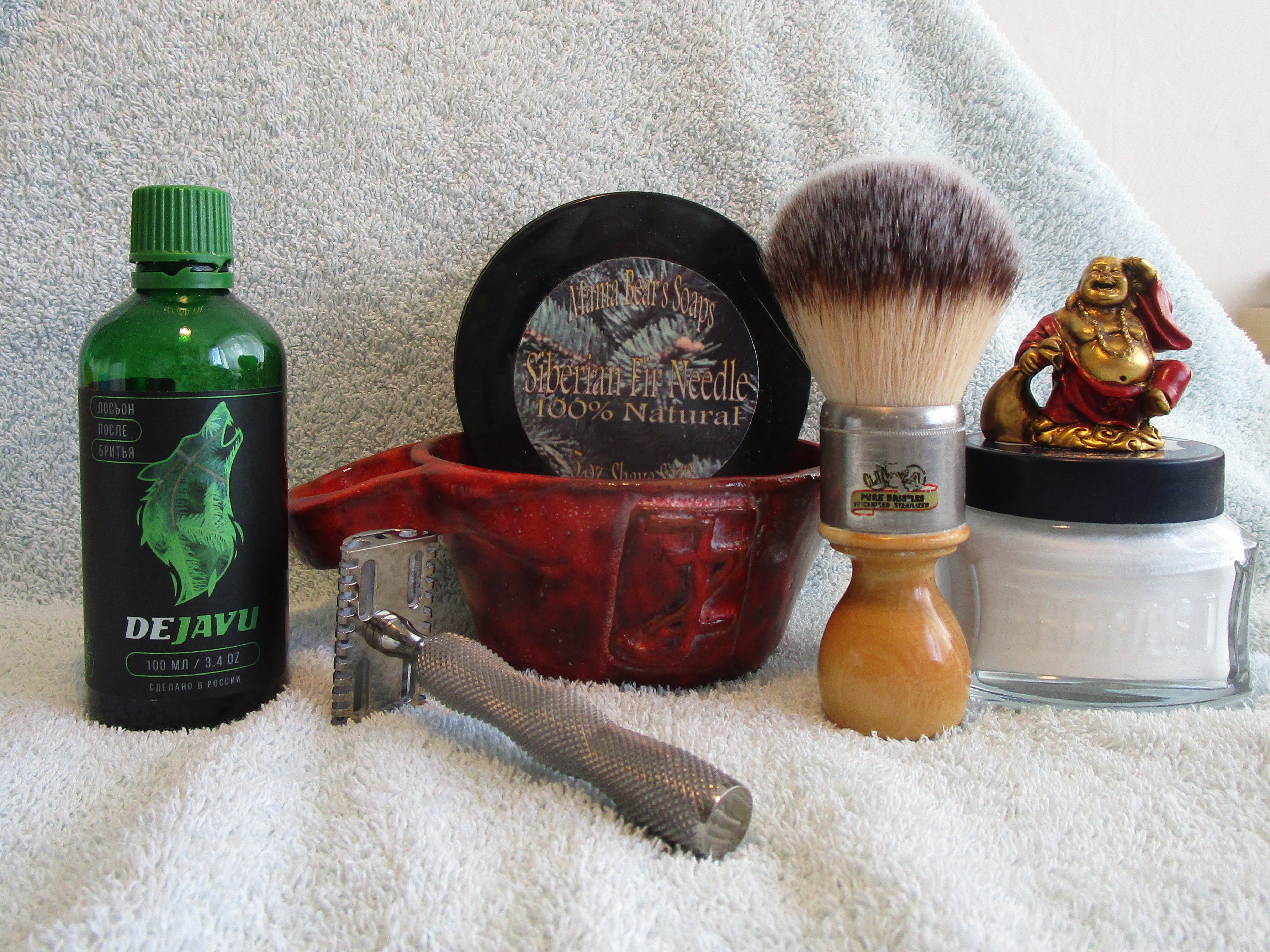 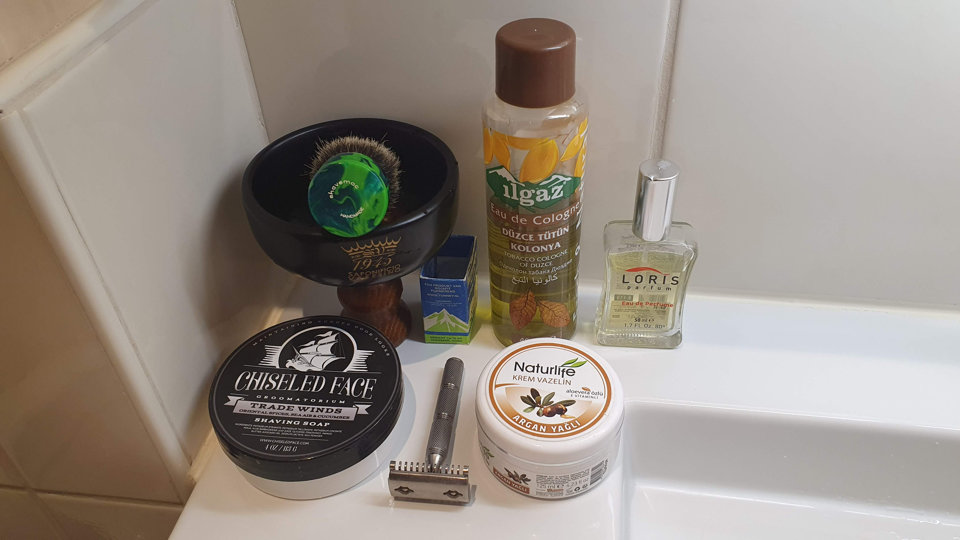 Brush and soap:
Shavemac Silvertip D01 2 band bulb 24 mm x 50 mm Jungle Moss and Chiseled Face Trade Winds:
The sturdy Shavemac Silvertip D01 2 band bulb 24 mm x 50 mm Jungle Moss makes a nice lumpy lather from the complexly spicy and tart, but also earthy, scented Chiseled Face Trade Winds. This soap always evokes in me something of one of those old harbors with botters, like Spakenburg.
Blade and razor:
Used the Personna Platinum Chrome (Red) for the 2nd time.
The Personna Platinum Chrome (Red) from my own stock again feels a bit more comfortable. However due to a few small wounds from earlier I pulled some spots open with it again. Tomorrow again the other Personna Red. Have too little experience to say definitively, but I think there is a difference. The Gillette Goodwill (head) with this Personna Platinum Chrome (Red) is reasonably efficient. The combination is quite pleasant, but as mentioned I had to be careful on my head, the face was as smooth as ever.
Result: BBS.
Finally: some worn fragrances of Ilgaz Düzce Tütün (Tabac), Naturlife Krem Vazelin Argan Ve Aloevera Özlü and Loris E-113 Hermes Terry to stay nicely in the spicy woody atmosphere and well cared for start the day.
E 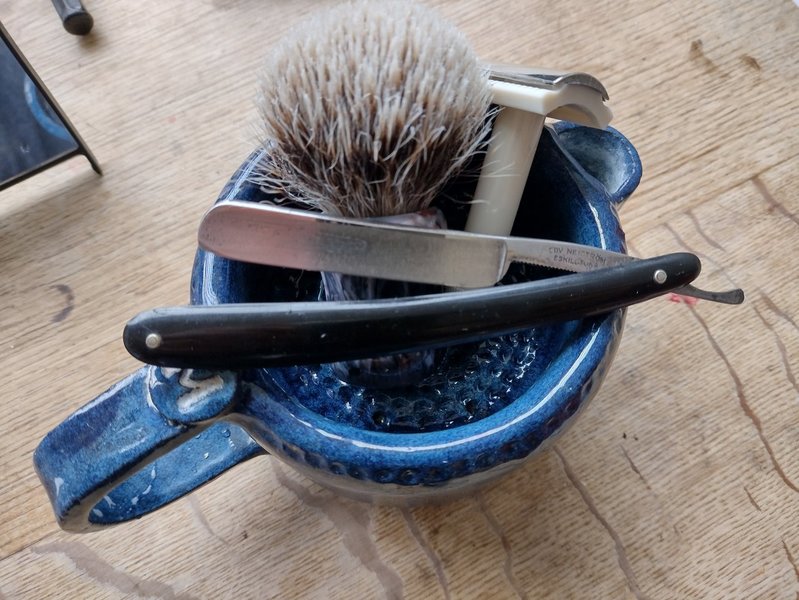 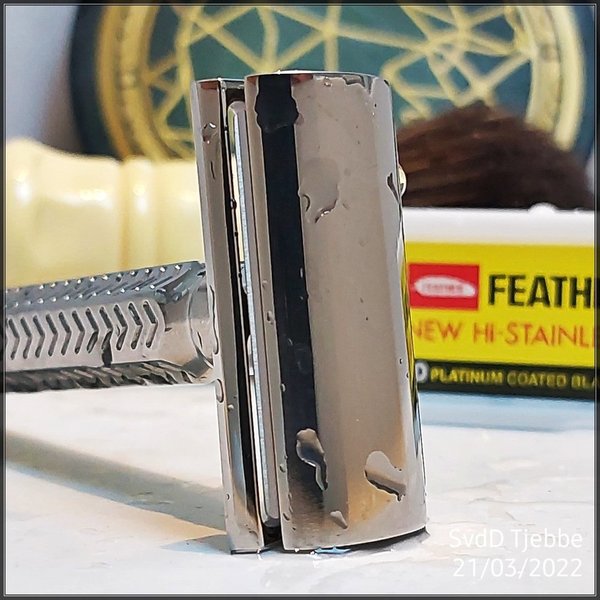 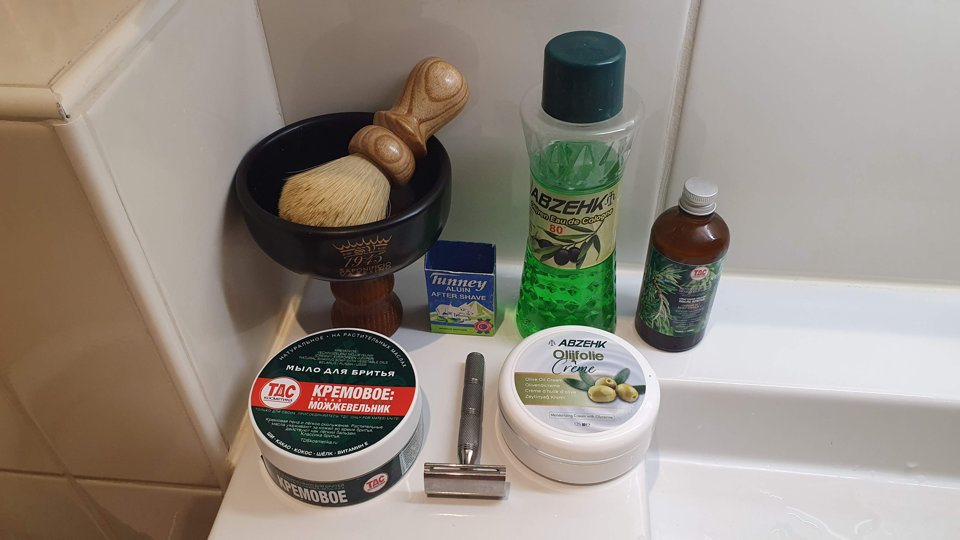 Brush and soap:
J&T® Essen Jiamei Cosmetic imitation bristle 24 mm and TDS Cosmetics Cream: evergreen juniper:
The TDS Cosmetics Cream: evergreen juniper is a resinous juniper soap. Not overly fragrant and the balance of resin and juniper scent is just fine. The J&T® Essen Jiamei Cosmetic imitation bristle 24 mm has no trouble achieving a good lather with this soap. That lather is more of a thick liquid cream with enough airiness to brush on. Shaves perfectly well.
Blade and razor:
Used the Personna Platinum Chrome (Red) for the 3rd time.
The Personna Platinum Chrome (Red) is much more pleasant to use, than the day before yesterday. Apparently that is a difference of razor, because this is really remarkably better. In the RazoRock Game Changer 0.84-P, the Personna Platinum Chrome (Red) feels about as I expect from this blade. Can you see the effect of different razor. Shaved fine and therefore hold back on a judgment.
Result: BBS.
Finally: the Abzehk Olive edc and Abzehk Olive oil cream are a somewhat neutral slightly sweet finish fits almost everything. Then some TDS Cosmetics Juniper ASL and the whole thing is fine again. 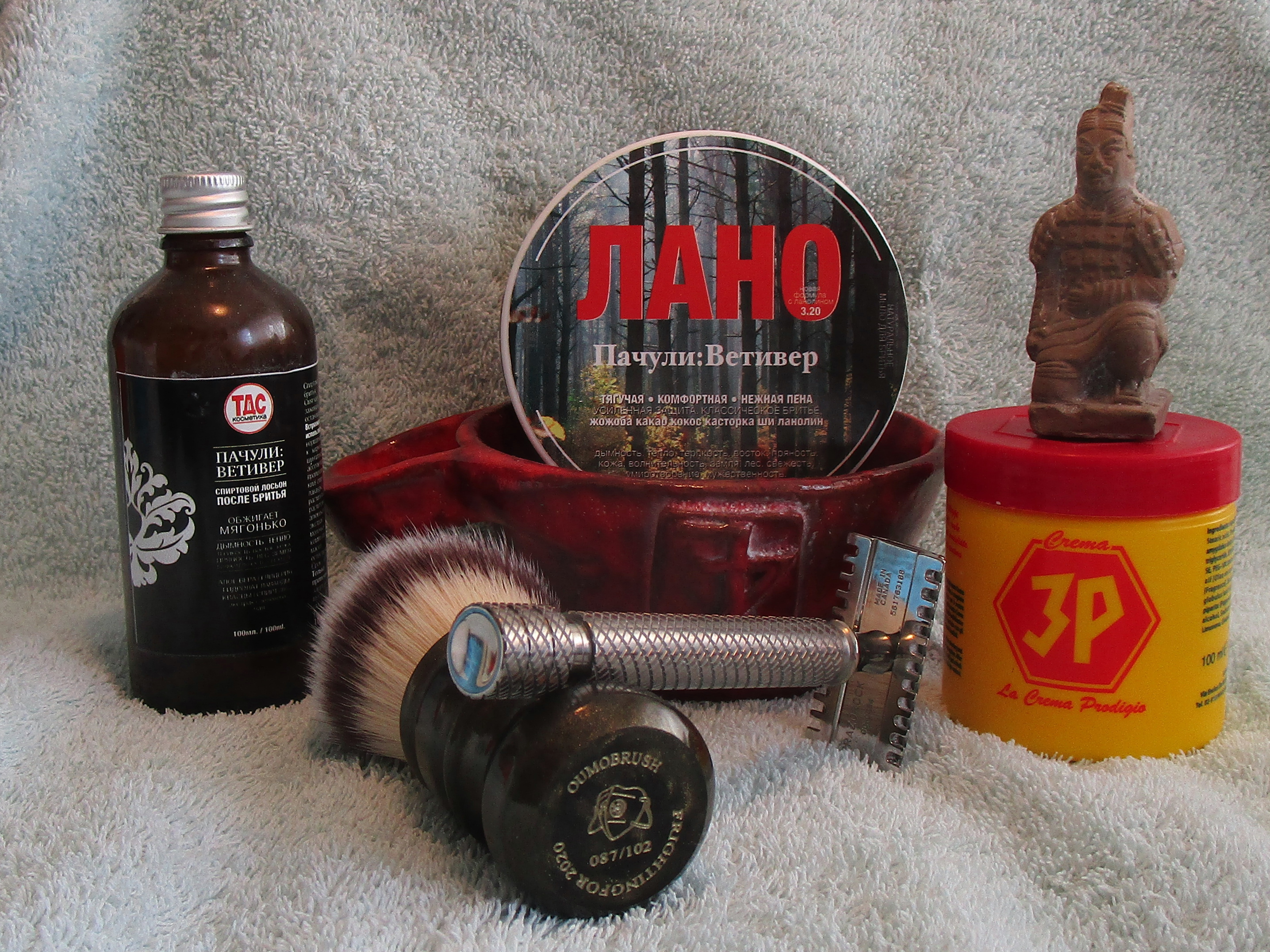 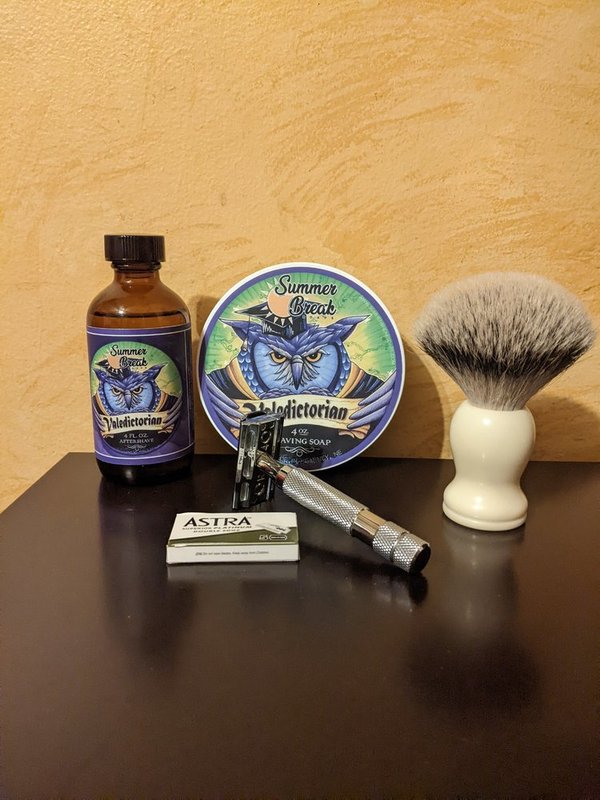 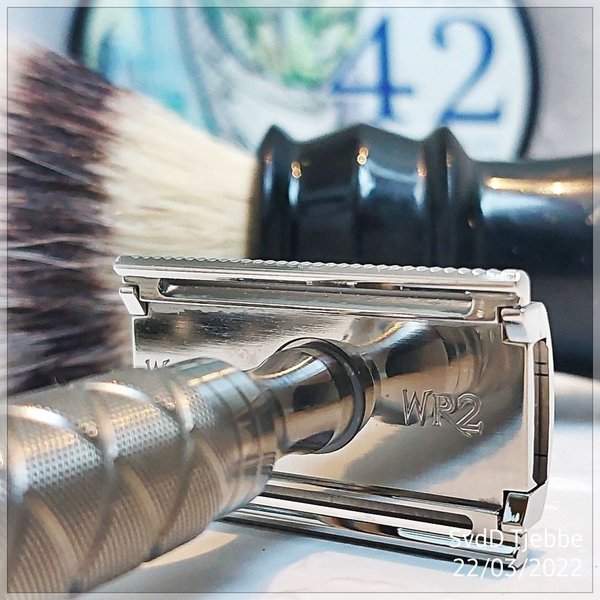 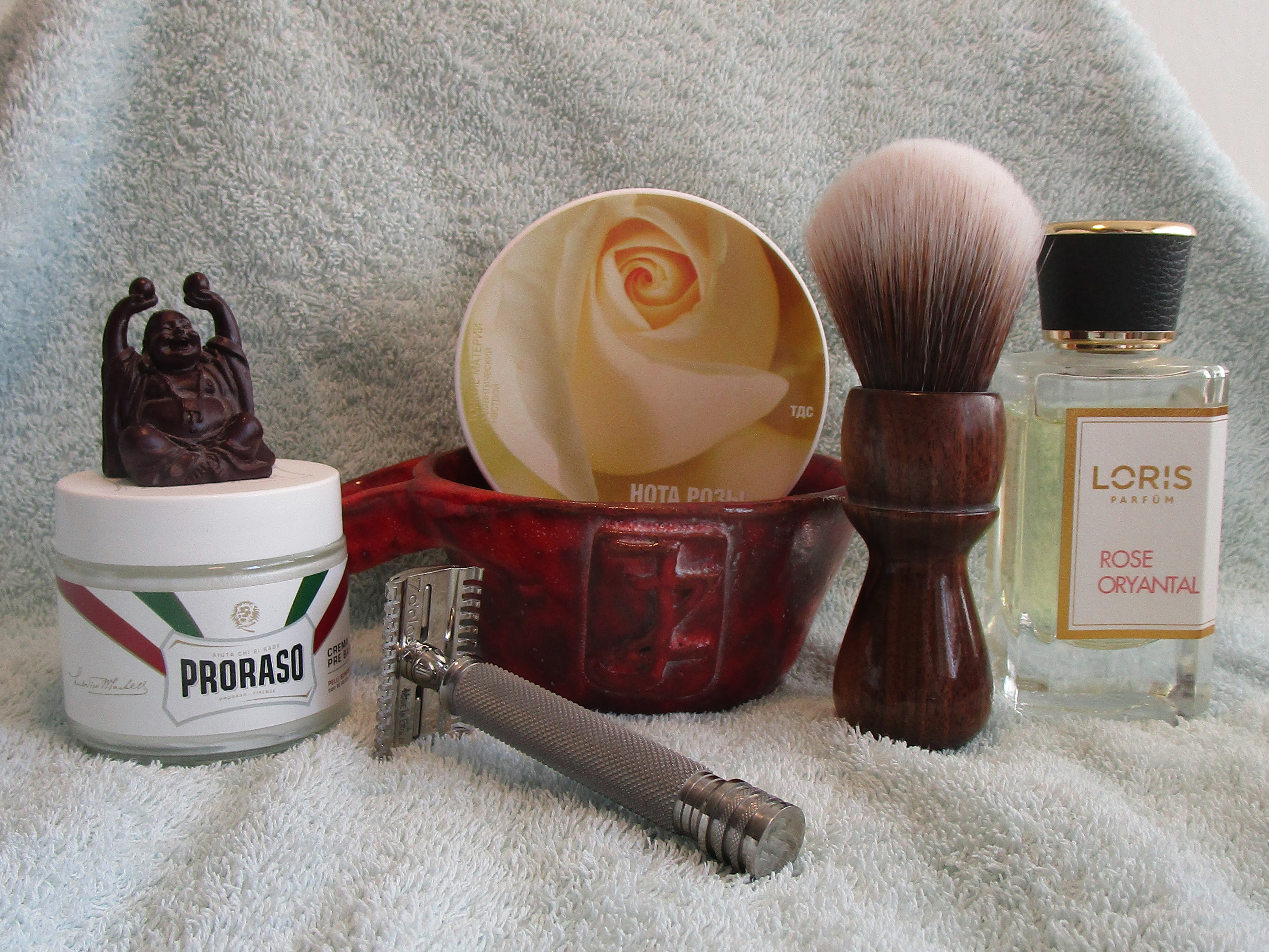 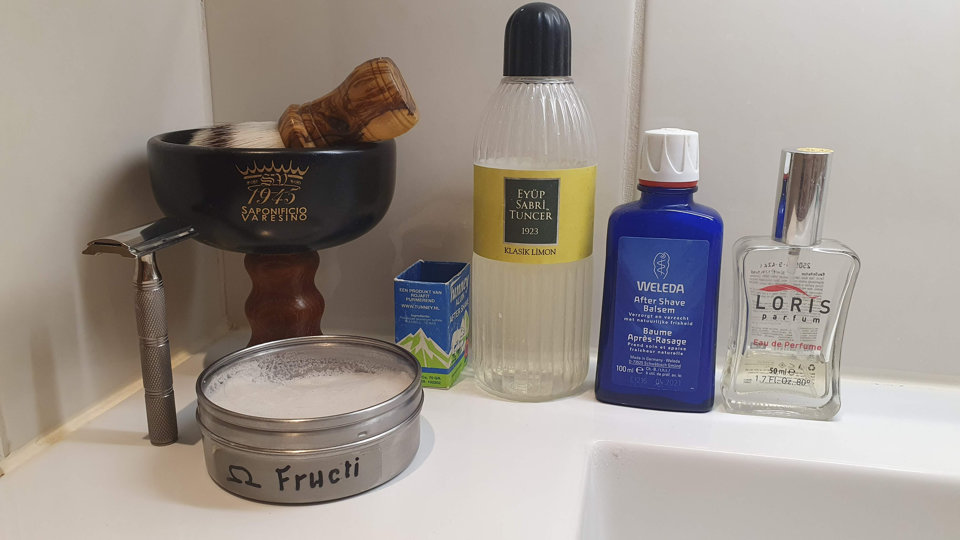 Brush and soap:
Jerusalem Harkos® Fibre and Via Barberia Shave Soap Fructi:
Each time it is a pleasant experience to whip up a lather with the Jerusalem Harkos® Fibre from the Via Barberia Shave Soap Fructi. It's easy and gives extremely pleasant full fat fruity lather. Slightly sweet citrus.
Blade and razor:
Used the Personna Platinum Chrome (Red) for the 3rd time.
Personna Platinum Chrome (Red) an excellent blade to use and it was noticeable again this morning. Nice tight comfortable cut. Not much better, than the Personna yesterday, but still just a bit more pleasant to use. The RazoRock Game Changer 0.84-P and this Personna Platinum Chrome (Red) are a good combination.
Result: BBS.
Finally: Eyüp Sabri Tuncer Kolonya Klasik Limon, Weleda Aftershave Balsam and Loris E-048 Cool Water for a fitting finale.
Nice weather to wake the Harley from hibernation today. 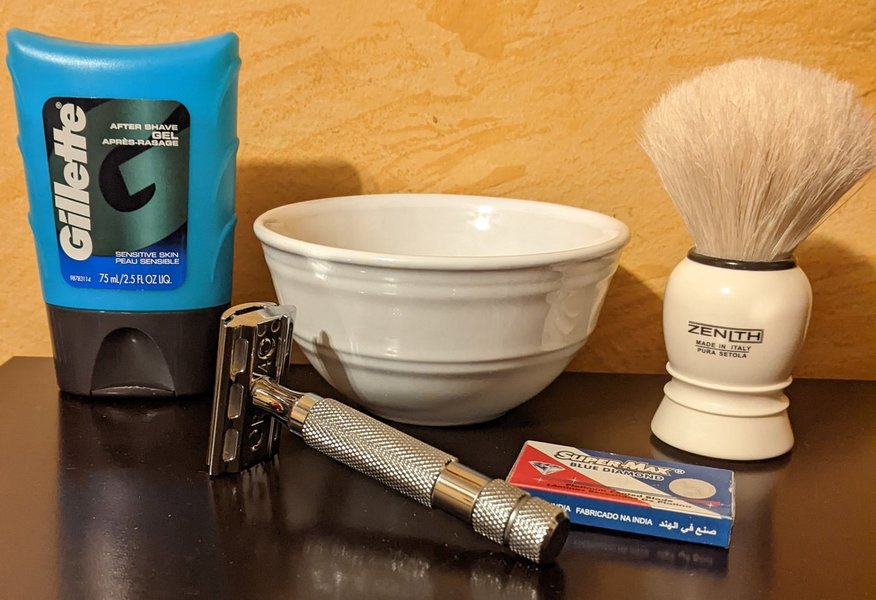 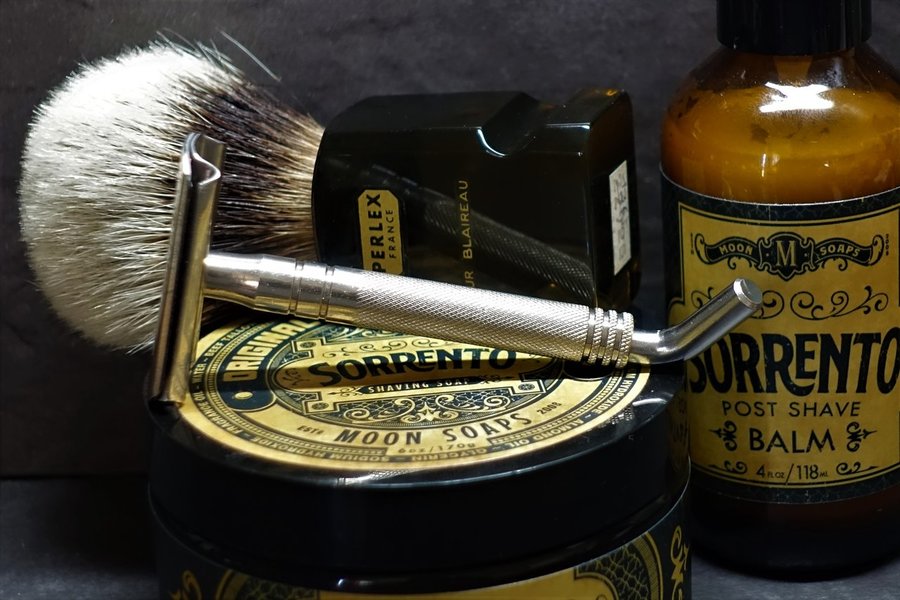 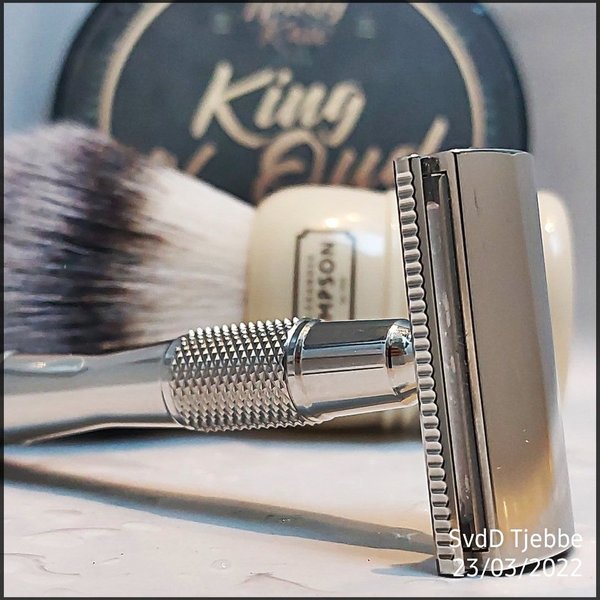 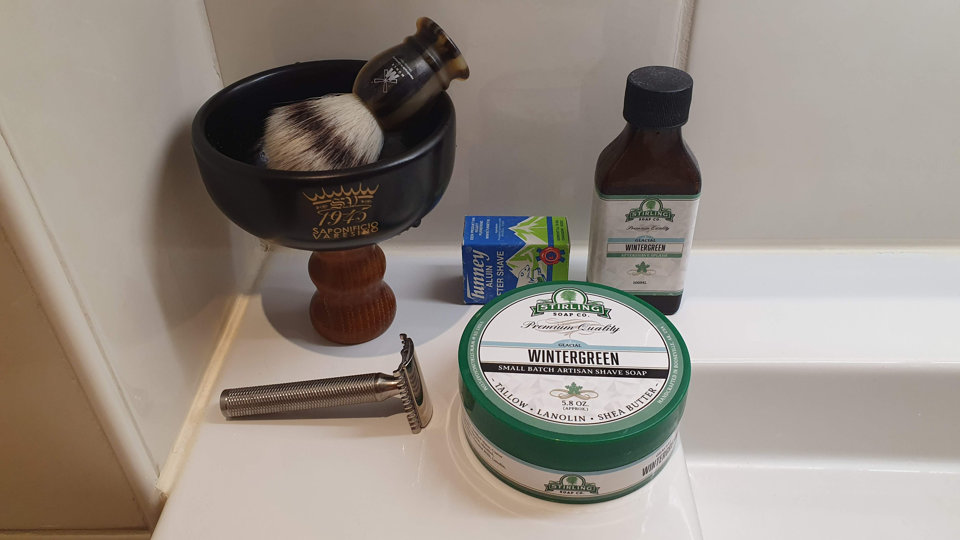 Brush and soap:
Mühle Silvertip Fibre® 21mm and Stirling Wintergreen:
Stirling Wintergreen is a soap for lovers. Prickly fresh, tear-jerking lather I whip from it with the Mühle Silvertip Fibre® 21mm. This freshness remains throughout the shave and is also pleasantly felt in the skin. Really something for lovers of menthol, mint and these so.
Blade and razor:
Used the Personna Platinum Chrome (Red) for the 4th time.
The Personna Platinum Chrome (Red), which I am currently comparing, behaves very well today and shaves pleasantly smooth. Basically as I expect from this blade. In the Gillette New, the Personna Platinum Chrome (Red) is efficient and also pleasant to use. Slightly less, than in the Game Changer, but any blade gets merry in there. When the blade from my stock tomorrow feels similar, I think I'll know, but first compare in the Gillette New.
Result: BBS.
Finally: the original Stirling Wintergreen AS gives another firm sting, after which the Toco-Tholin Lavender ASB closes things off nicely cared for and smooth.
You must log in or register to reply here.
Share:
Facebook Twitter Reddit Pinterest Tumblr WhatsApp Email Share Link
Menu
Log in
Register
Install the app
Top