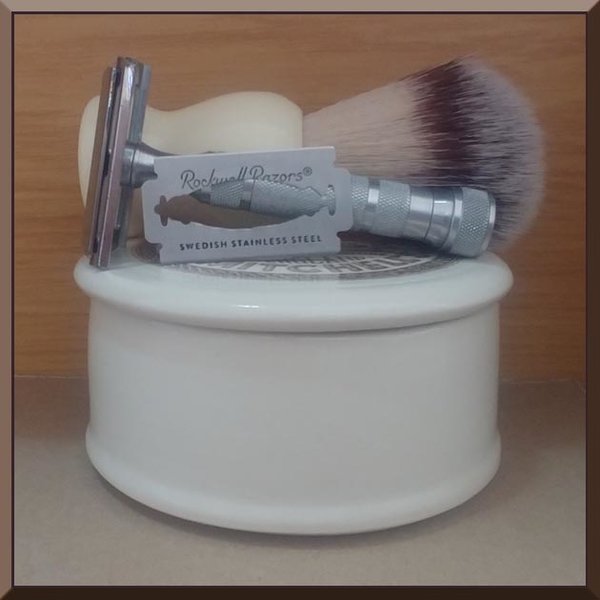 Moderator
SU-Patron Gold
@Clouds I realy like how you work on getting to use these proprietary-blade-razors.
Cheers!
Richard

Have a nice Sunday Gentlemen. 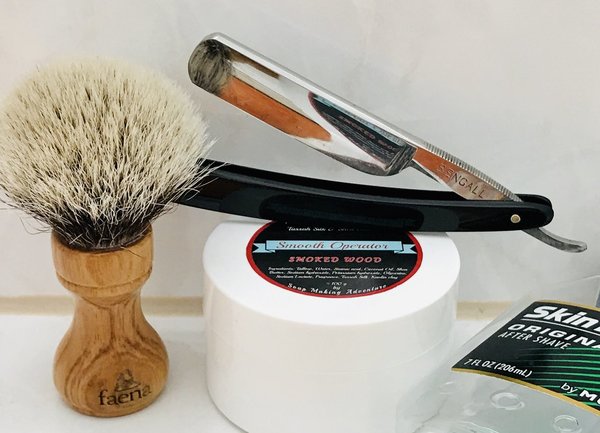 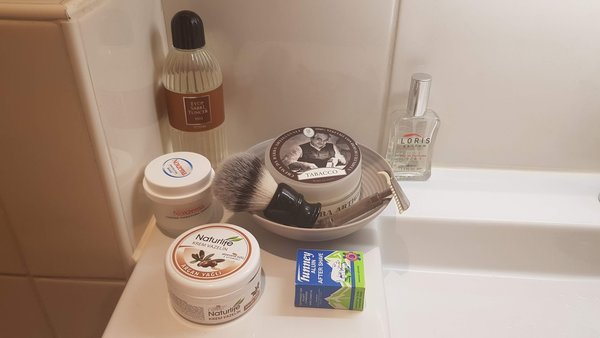 Brush and soap:
Luyixian Synth-24x68 and Extro Tabacco:
Driven by curiosity I bought some pots of preshave, probably too much again, but well someday you must have tried that too. This morning the Noxzema Protective Shave. A light cooling cream, which can be used to whip up a fine foam with the Luyixian Synth-24x68 of the Extro Tabacco. The foam of the Extro is very good, if you pay a little attention to it. This is a good preparation for a fine shave. And then the question arises: what does the preshave add? So far I haven't noticed that it shaves much better. I'm also not sure it's better for my skin yet. Keep experimenting well. One thing I already know, at least it cools down nicely as far as menthol and camphor containing creams are concerned.
Blade and razor:
Used the Super-Max stainless for the 5th x. The Super-Max stainless has passed its peak, which in itself is not high. The blade has done its job today, but that demanded a lot of attention, so piggy bank. The combination Fasan Slant #42 and Super-Max stainless was not at all wrong and possibly, 1 or 2 turns earlier, had shaved this quite well, but now the blade was too far gone to show the quality of the Fasan in all its dimensions. Yet the shave was acceptable and I'm smooth again. Result DFS.
Finally: with the Eyüp Sabri Tuncer Tütün, Naturlife Krem Vazelin Argan Ve Aloevera Özlü and Loris E-164 Laura Biagiotti Roma nicely finished in the tobacco scent line. Have the feeling, that the skin feels a little less dry, wouldn't that be an effect of the preshave? In any case, without it the Extro wouldn't be any less good and the beard would be at the same time as well off. 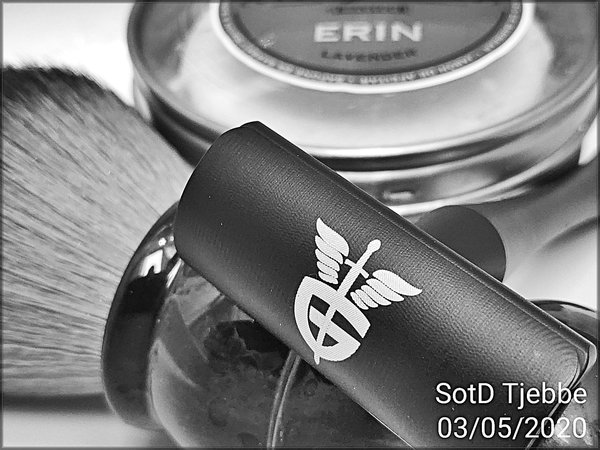 Not really convinced (yet?), switched to the Paradigm 17-4 for my headshave.

Have a nice Sunday! 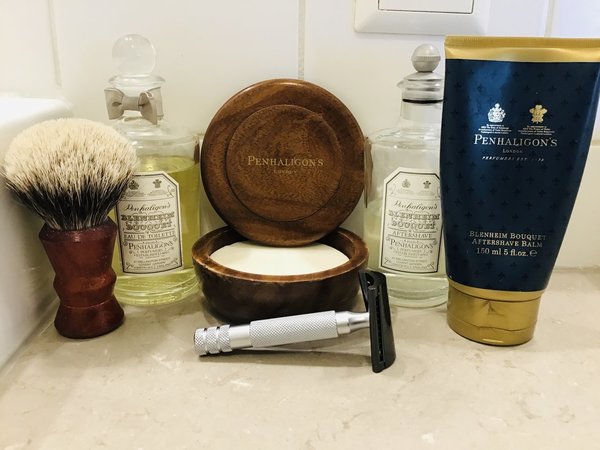 The return of the iKon B1 after years of absence in the King's house touched me and the tears were almost over my cheeks.

Or was it because of the included blade which gave a raw and less pleasant shaving experience.

After the second gait I put another blade in the iKon and that resulted in a very nice end of the shave.

A really pleasant shave. The razor is effective but can be a bit raw, not today.
This Old Salty soap is a real Ace, excellent perfomance and the smell is weird but nice. 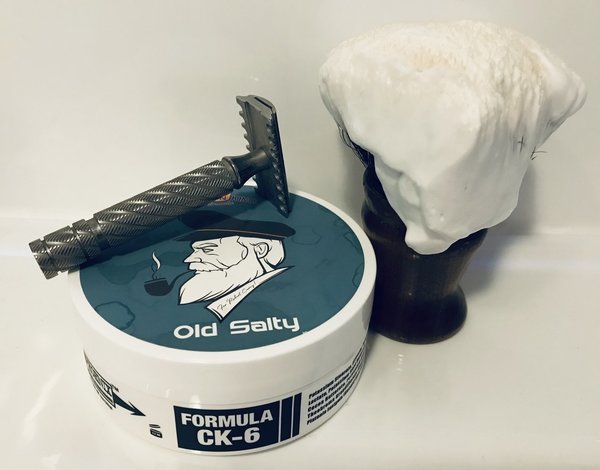 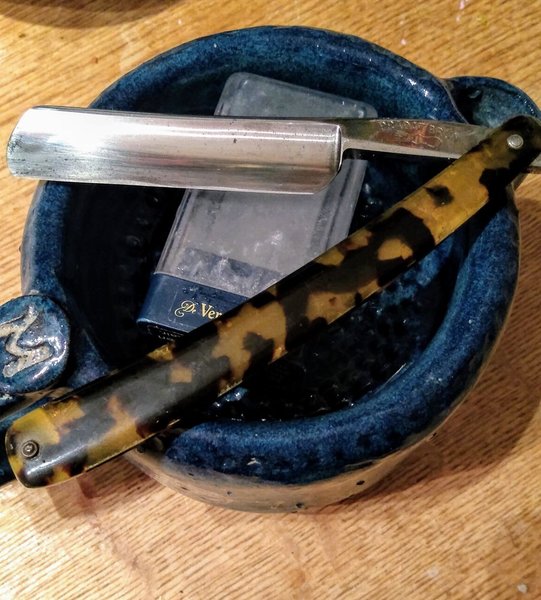 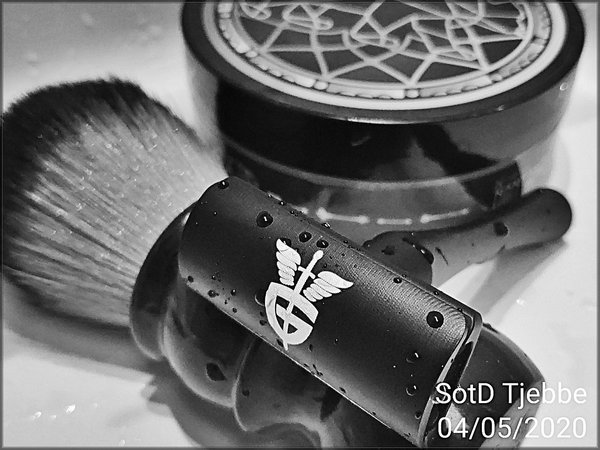 I got a very nice and slick lather, but a rather scratchy shave...
The Gladito (after only 2 uses) is too light, too edgy and too uncomfortable for me.
It's a well build gimmick, I like the attaching of the top cap to the base.
I'll give it another go, but not tomorrow. 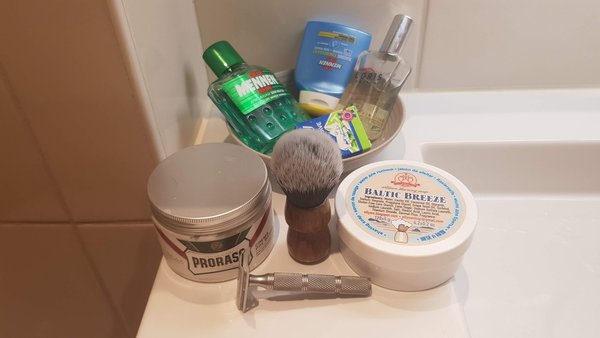 Brush and soap:
J&T® Bamboo Tuxedo Syntheet 24mm and Elly's Baltic Breeze:
In the context of preshave or not, this time Proraso Crema Pre Barba on the skin applied. Then the J&T® Bamboo Tuxedo Syntheet 24mm knocked a large bowl of foam with Elly's Baltic Breeze. That's fine with this soap. The smell is slightly fresh aquatic, which comes slowly out of the starting blocks after the Proraso PS as the PS cools down quite nicely. The foam is not dying and I have to say that shaving is influenced by it, at least for my feeling, but feeling is emotion and therefore not objective. Actually I don't shave significantly better with PS, than without and with a good foam. but yes the ritual is deepened and then we are back to the emotion. Well what was it all about again, yes that the beard and head hairs are nice and smooth off.
Blade and razor:
Used the Super-Max Blue Daimond for the 1st time. A very doubtful blade for me this case, Super-Max Blue Daimond. Until now they were no better than the Derby Extra, if they came this far. Well this one did nicely for the 1st turn. Would be awful if that didn't work out. I'm smooth, but with rest and attention. Probably the RazoRock Game Changer 0.84-P lifted the Super-Max Blue Daimond to a higher level than in the past. Result BBS.
Finally: Mennen Skin Bracer AS, Mennen Baume Energisant and Loris E-048 Cool Water to close nicely. At the end of the ride the PS was completely out of the picture, but I noticed, also yesterday, that something did happen, if only the beard hairs were sticking more to the blade....
E

The Treet also performed well for me in the merkur 11c. Lmdb doesn't lather well in a scuttle, but when face lathering you get an explosion of lather. 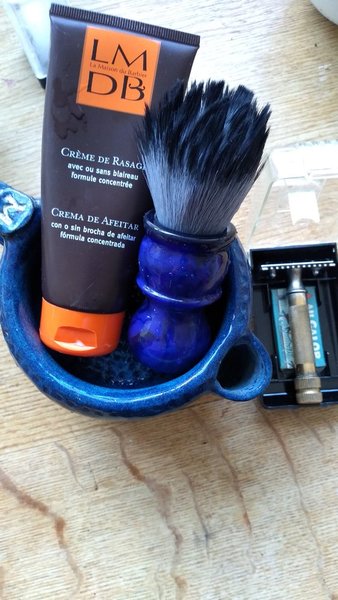 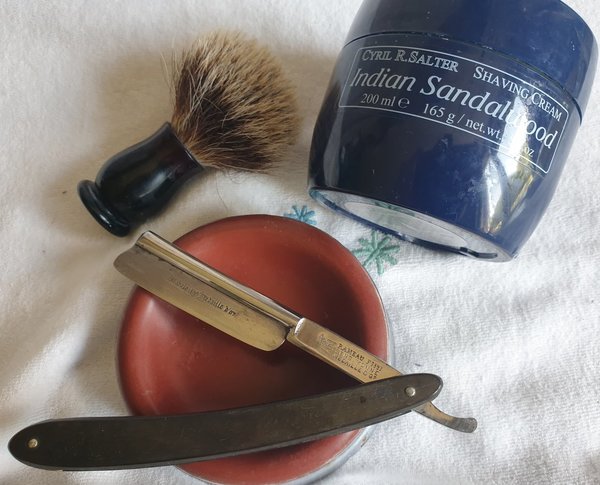 Pretty good shave, actually. Only downside is I like the smell of Vulfix Sandalwood better. (Foams well, there's nothing wrong with that. 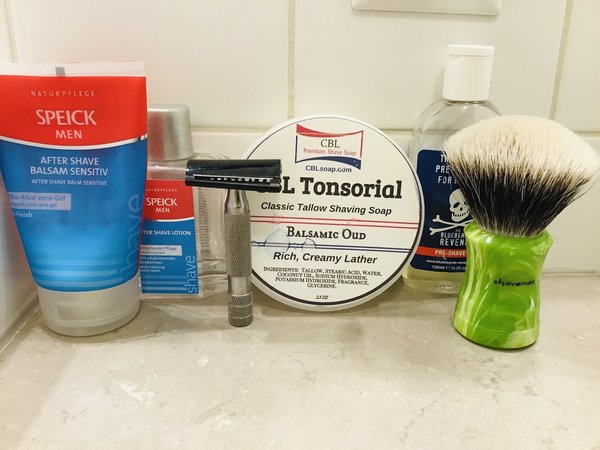 Treet doesn't cut more than one shave, then it starts tugging and pulling. Tried three blades now, that was it.
Cheers!
Richard