Moderator
SU-Patron Gold
(As I thought a thread on this razor already existed, I neglected to make pictures of this razor while it stayed at casa de efsk for the passaround. Someone else will have to correct this.)

I doubted a bit whether to place this under DE or SE, but as the razor uses only one side of its head and only one edge of the blade SE it will have to be. Which is an interesting choice by this new Bavarian brand
Please, Log in or Register to view URLs content!
that funnily enough prominently features a bearded guy to advertise a razor.
Made from coated aluminium, this is not a heavyweight, matter of fact I believe the magnets are the heaviest part of the razor. Magnets? you ask, wel, yeah. After taking of the cap, by sliding, not screwing, you place the blade (a full DE blade) on the base where it is held in place by a magnet. You then place the cap and slide it in place, and it will be held in place by another magnet. A simple enough, interesting way of dong things that functions remarkably well.All you have to take care of is that the right side of the cap points towards the cutting edge. To help, the cap has an inscription on the inside, but easier is it to look at the branding on top: with the cutting edge toward you, place the cap so that you can read the logo. To see where the edge is, check the head from the side. Takes a bit getting used to, and adds to the question of why an SE design was chosen.
When shaving, it is flushing often as the closed design offers not much room for lather to gather, and a bit of a search for the right angle. Riding the cap/shallow angle there's a bit of drag from the coating, ride the guard/steep angle and the shave gets a bit rough, there's a narrow band in between where the shave is both comfortable and effective. I had a bit of problems olding that agnle consistently during the shave, and it was searching for it every save. That may have to do with the fact that most of my razors are less angle specific, so I can get away with less ideal angles. When finding that angle, I got close, comfortable shaves, not the longest lasting ones, but not bad at all. It does take a bit of work to reach that point though, where there are razors that can reach that point with less effort. But hey, if you like the looks of this thing, or need european made, and are willing to overcome the learningcurve this is not a bad razor.
That's a big if of course, as I find it rather ugly
Cheers!
Richard

Are you using the pink one?

Interesting web site. Yes the home page shows someone with a full beard. The shavette uses a half blade, but the DE uses a full blade which only half is being used.

Good that it cost too much and is too far away for me to have second thoughts about possibly getting.

Moderator
SU-Patron Gold
Ze Zjermans kept the pink one. We have to make do with black.
Cheers!
Richard 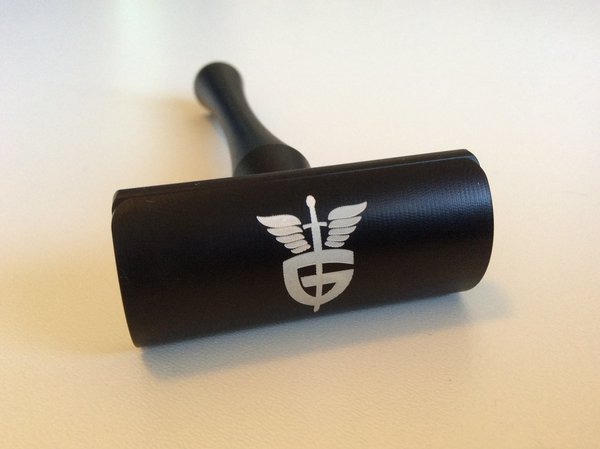 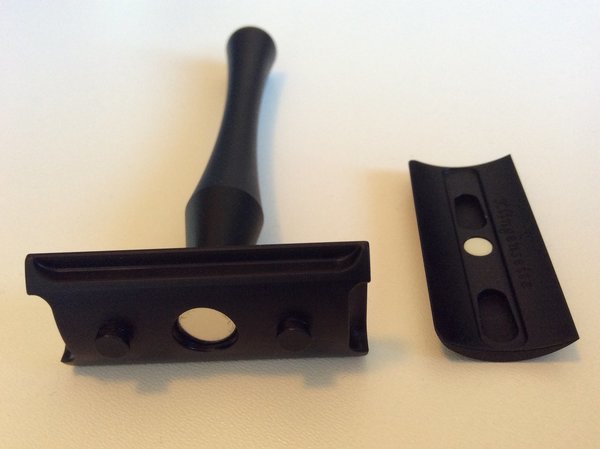 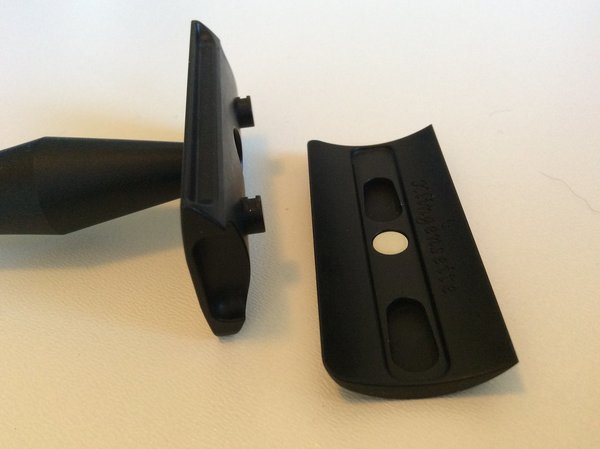 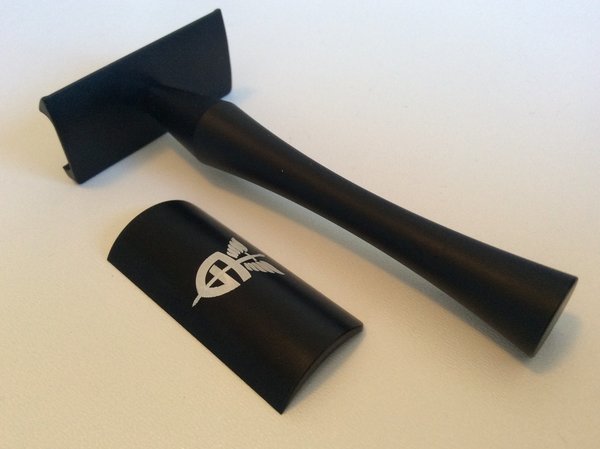 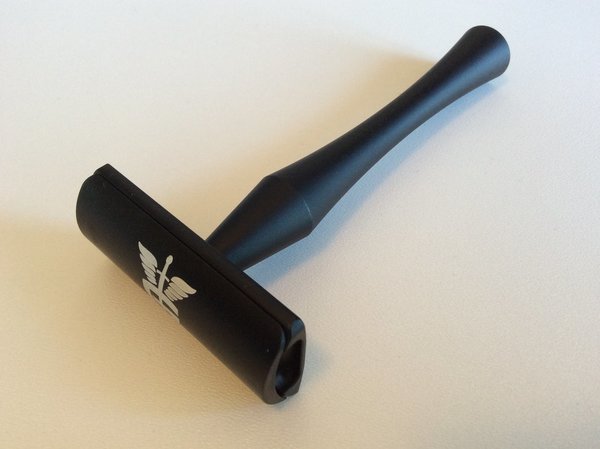 After shaving a few times with the Gladito, i just confirm Richards comments about the angle. You have to pay attention to get it right, otherwise it gets uncomfortable.
I like the way this razor looks and feels, but I don't get the idea of using a DE blade in a SE way. You have to turn the blade from shave to shave to " fully" use it.
The magnetic thing works out fine. When shaving with the Merkur Digress after the Gladito shaves I noticed how easy and comfortable the Merkur is.
It was fun testing, but I will not buy or trade for any of my other razors.

Thanks to Maarten for sending me the Gladito today.

First impression beautiful raor to see but what a light one.

The first shave with the SE Gladito was one of the pleasant discoveries.

First it is an SE Scraper but uses the normal DE blades.

The second is the unusual way in which the blade has to be placed. The top plate should not be held in place by a thread but a magnet and tapered slots.

Exaggeratedly you would think on the other hand I sometimes have nightmares where I dream that the thread of my Paradigm 17/4 will be damaged, so there is a good idea behind this construction to prevent this.

Fetching the first couple is a complete disaster and little even the lather remains on the skin.
So looking for the right shaving angle and that is with the grip at an angle of +/- 15 to 20 degrees or in other words almost parallel to the skin.

Once the shaving angle is found, this razor is very effective and it remains very comfortable if you don't apply any pressure.

The result is convincing because I'm very smooth with some Irritation spots here and there where I too often went over the skin looking for the right shaving angle.

And that's the only drawback after the first time I use the Razor is very sensitive to the right angle of shave.

But me and aluminum and a very good shave who ever expected this?

But as everyone of me is used to, only after 5 shaves we make a final judgement.

The second shave with the Gladito made me a little wiser and that this is an uncompromising razor.
It only knows one shaving angle but once you've grabbed it it's more than efficient.

With all this you shouldn't slacken for a moment or it won't do anything because the shaving angle is not correct or you have, like me this morning, a blood point on the chin.

However with the right attention he remains surprisingly comfortable while I really have the feeling that the little safety bar doesn't do anything at all.

For the first time after all these years of wet shaving I have now discovered the benefit of the numbering on the DE blades.
Because the SE Scraper uses DE blades you have to turn them over before each shave and you can keep the consecutive numbering.

They make razors like this just to make sure you are alert when you shave.

The third shave with the Gladito and another small wound on the chin. And that's a minus for me of this razor the straights like on the cheek and neck go without a problem. However, where the razor has to bridge the chin or jaw line, it is very difficult to keep it shaving because of its small shaving angle.

This may be the ultimate razor for men who don't have or take the time to shave in the morning. It is so efficient that one or two gaits are enough to look orderly until the evening.

He does his job well, but after three shaves there's still the doubt whether it will ever be as carefree raking as with a Wolfman or a Paradigm. The Gladito constantly demands the user's undivided attention.

The last shave for me with the Gladito. After 5 shaves, my conclusion is that it is an extremely efficient razor. With calm and good use, you are truly clean-shaven.

On the other hand, I miss the pleasure of shaving that other Razors give me because the constant search for the right angle of shave is especially on the jawline and chin.

Maybe it's because I'm not used to the light weight of the Aluminium razor, but the Razor also requires your full attention continuously to do its job and not to do any damage.

The way in which the blade should be placed is nice and also that it is an SE razor that uses normal DE blades makes this razor distinctive.

I like the look of it but the price on the other hand I find it quite solid.
The Gladito is not going to come into this house and I think there is only a small target group that will appreciate this razor with its direct shaving characteristics.