Moderator
SU-Patron Gold
Amazing little contraption, this razor made by the 1765 founded John Watts in Sheffield. Peter has done some digging up history of the company, so I'll just bother you with the razor, which was first released and patented in the UK in 1929, in the US in 1931. I placed this in my slant collection, as the head can be tilted, it's just that it can only be tilted forward.

Mine came in a nice leather case, lined with purple satin and velvet. Case contains razor, stropper, bladeprotector, bladeholder, and a bunch of paperwork. 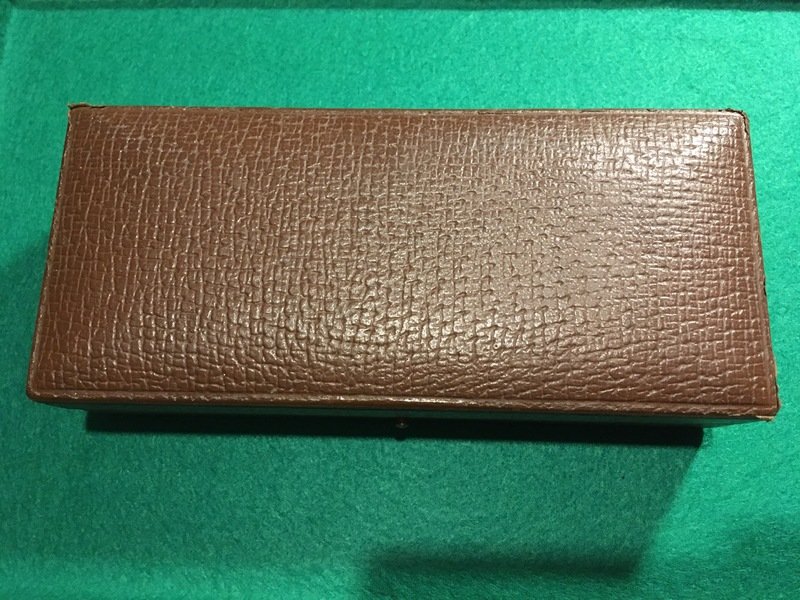 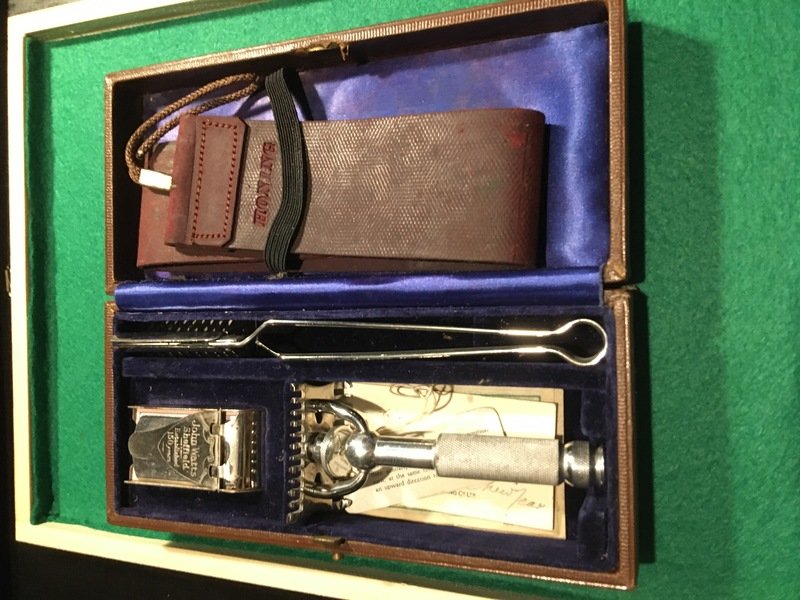 The leather strop is interesting, in that it has a honing and a finishing section, both on the same side of the strop. For honing use the far end, for finishing the near end. 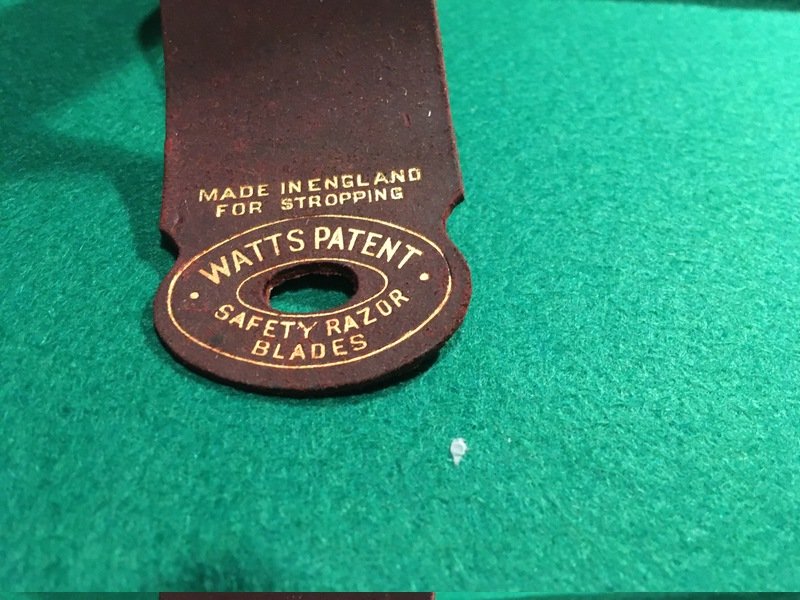 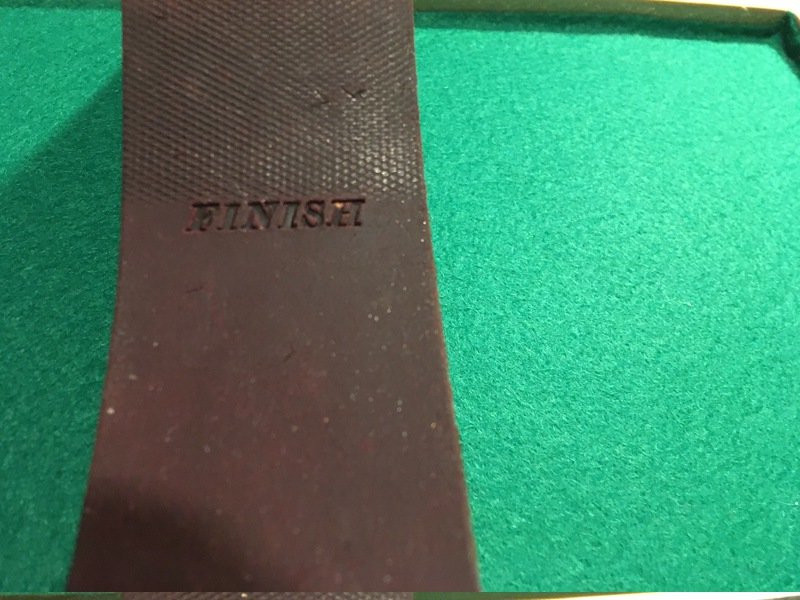 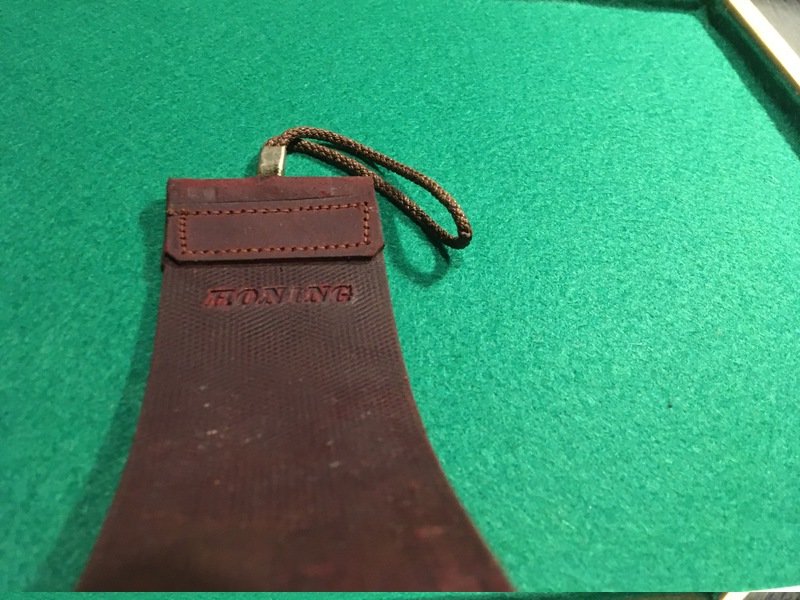 The stropper consists of metal tongs, functioning like a sort of pliers, and comes with a caged construction to protect the blade. For stropping, use it without it, for traveling, clasp the blade in the tongs, place the protective jail, and you're ready to go. 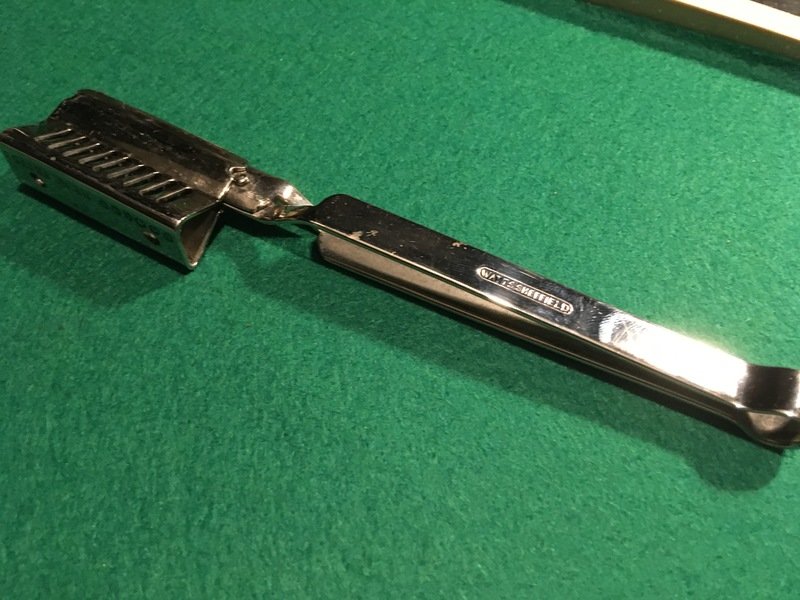 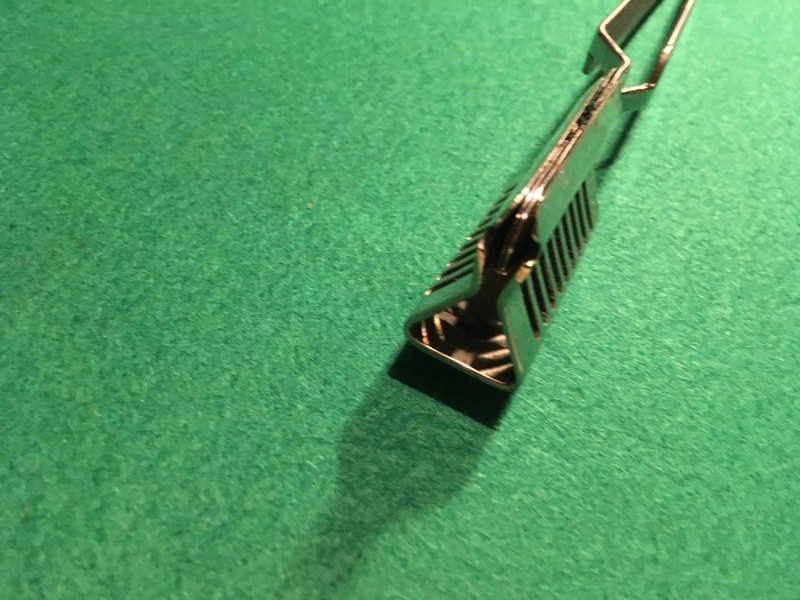 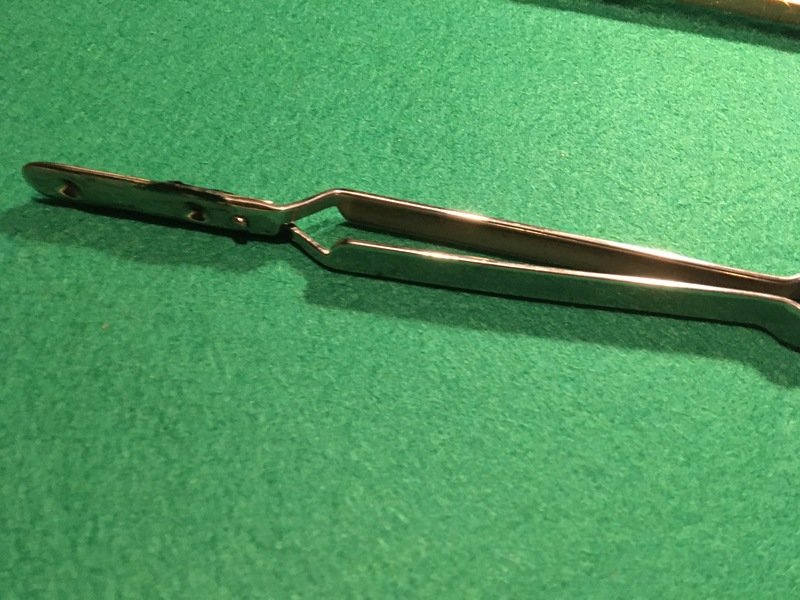 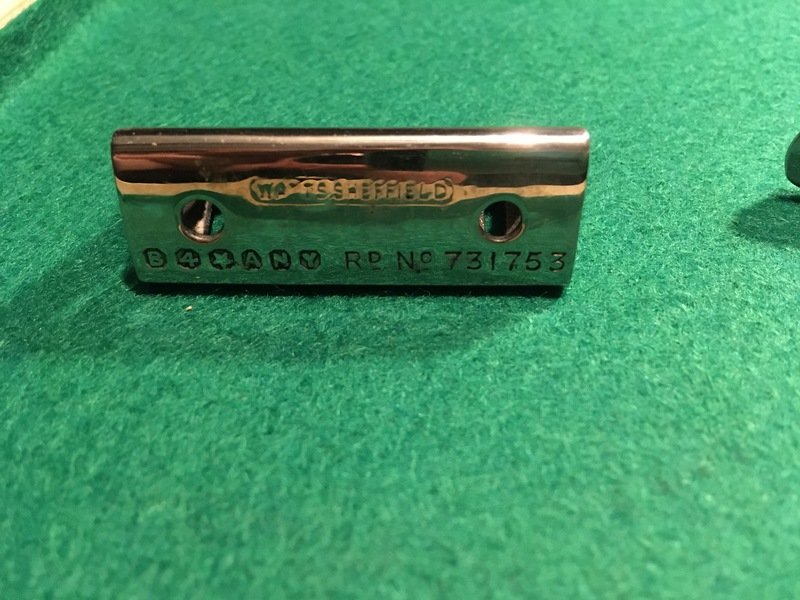 Bladeholder is a metal case with a clasp to prevent the blades from falling out. Mine comes with one unpacked, and eight packed blades (I think, did not remove them all). 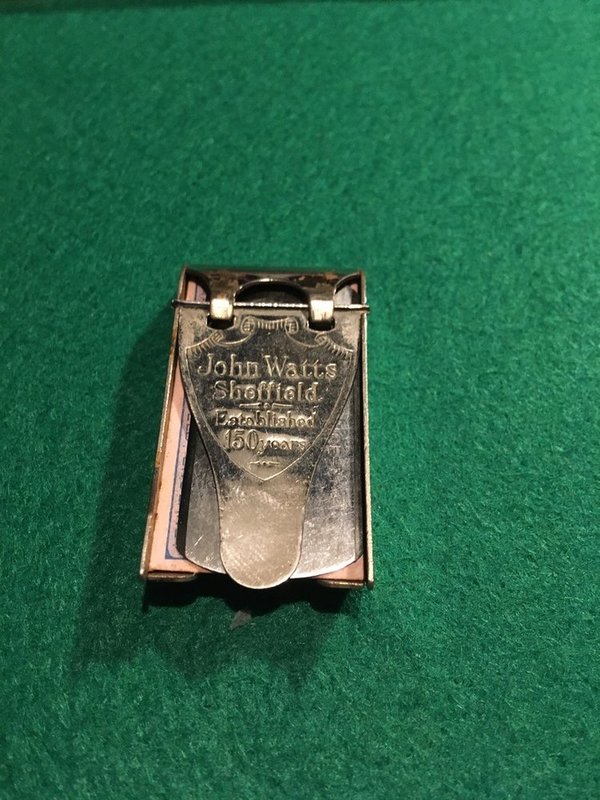 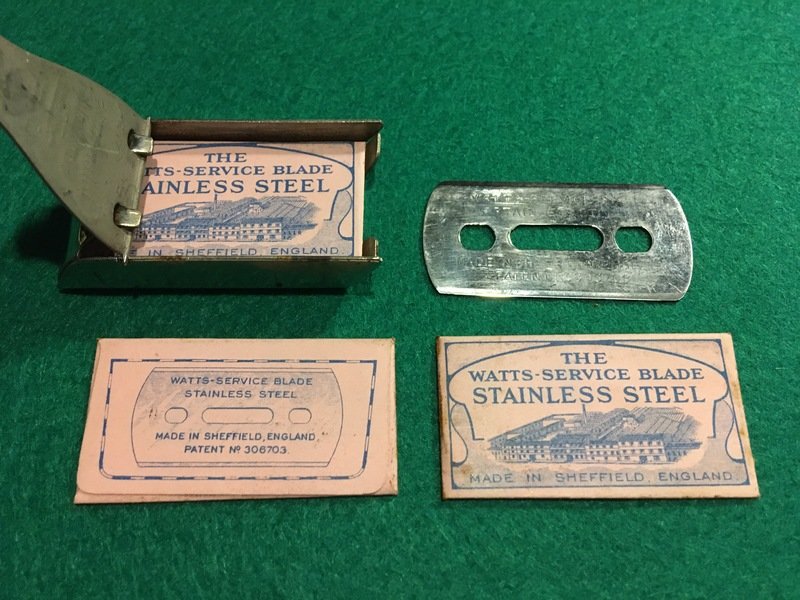 Paperwork has a Birminham business complimenting the new owner of this set, an instructionscard and two vouchers that were given out with blade packs. Ten vouchers won you a free John Watts pocket knive. 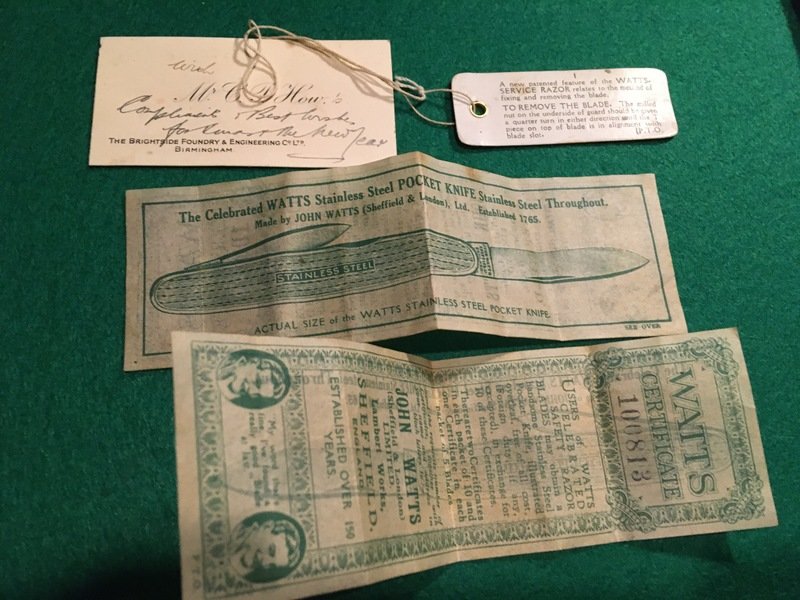 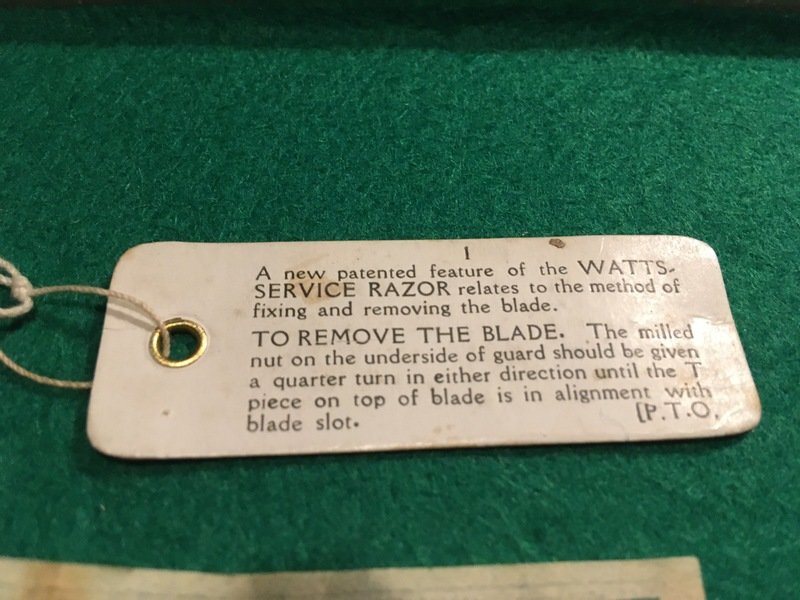 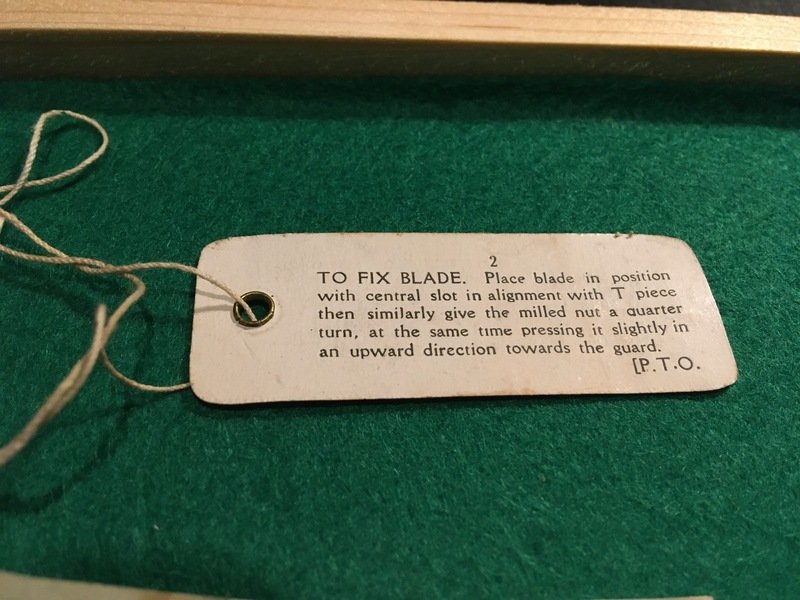 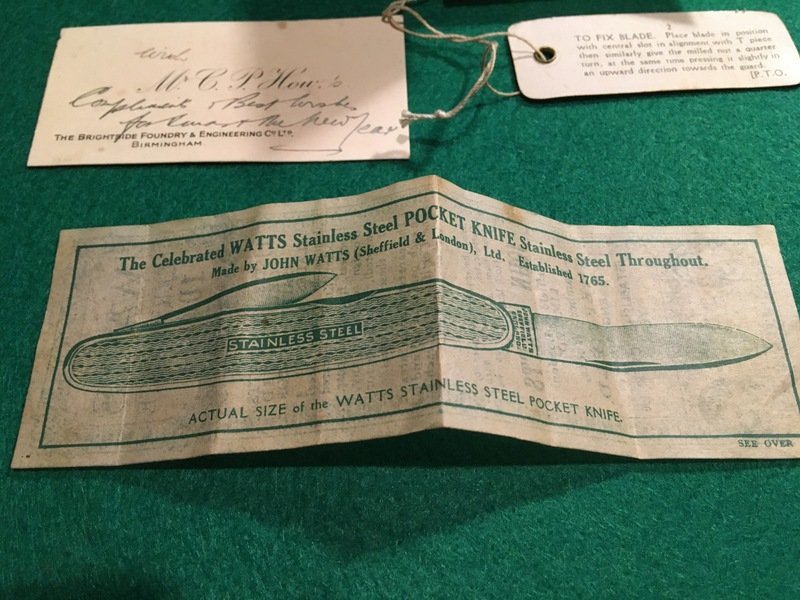 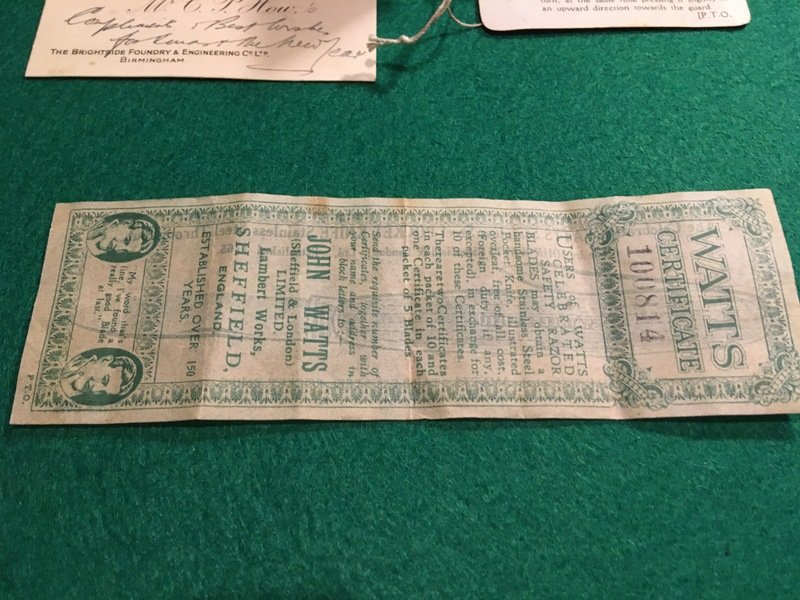 The razor is smaller than it seems, yet solid and looks pretty good for its age. A handle, ending in a knob through which rund a semi-circle that holds the head and that can be tilted up to nearly 90°. Only forward and backward. There's a screw in the rear end of the handle that can be loosened and tightened, haven't found out what that does yet. Nothing directly noticable.
Directly noticable is the lack of a cap. The razor has none. Instead, the screw underneath the head is turned until the propellorlike thingy in the middle of the head is parallel to the comb, then a blade can be placed over the two posts and the "propellor, and then the screw is turn until the propellor is parallel to the sides of the razor. The blade is now clamped in place. Regular blades won't fit without removing material, but I'm not sure one should be tried with this razor, as modern DE-blades are too thin and flexible wo be used without a cap. 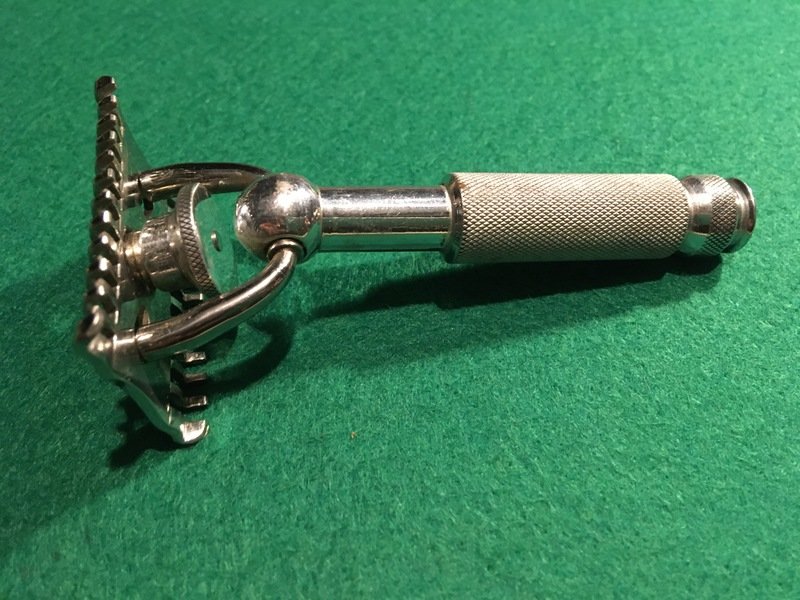 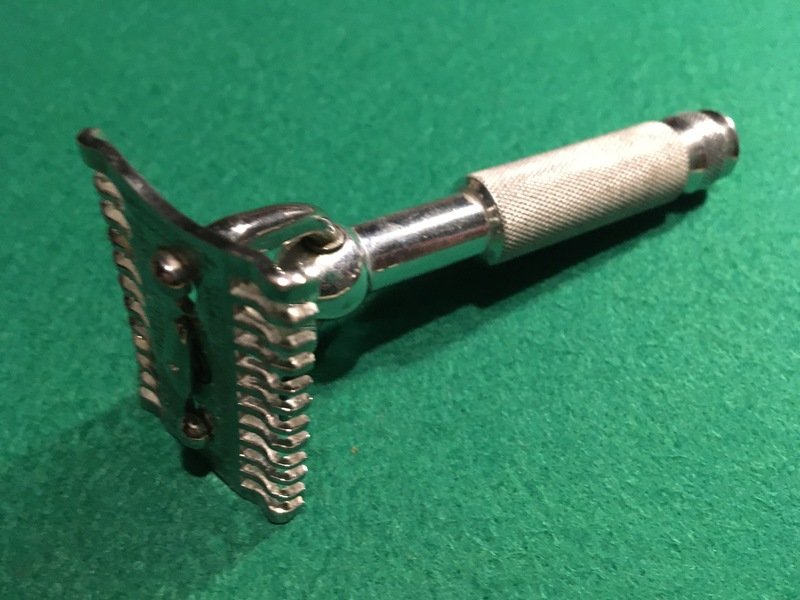 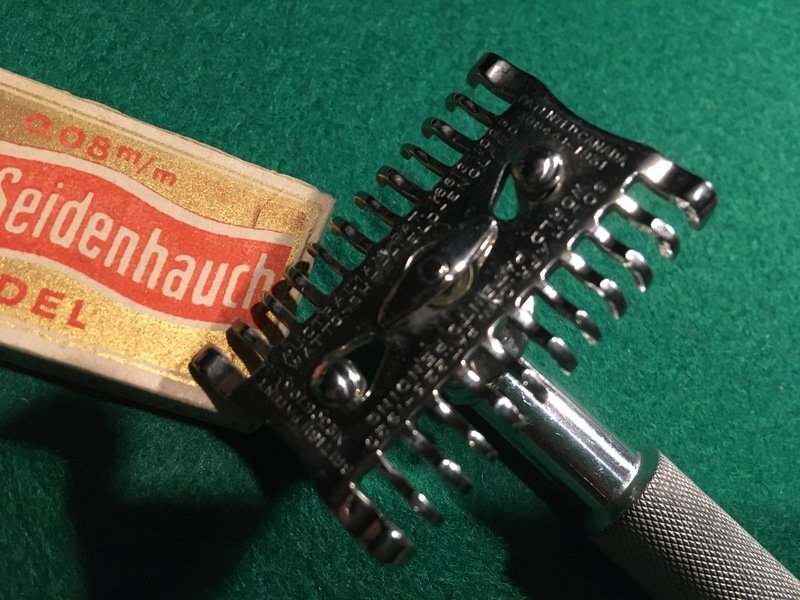 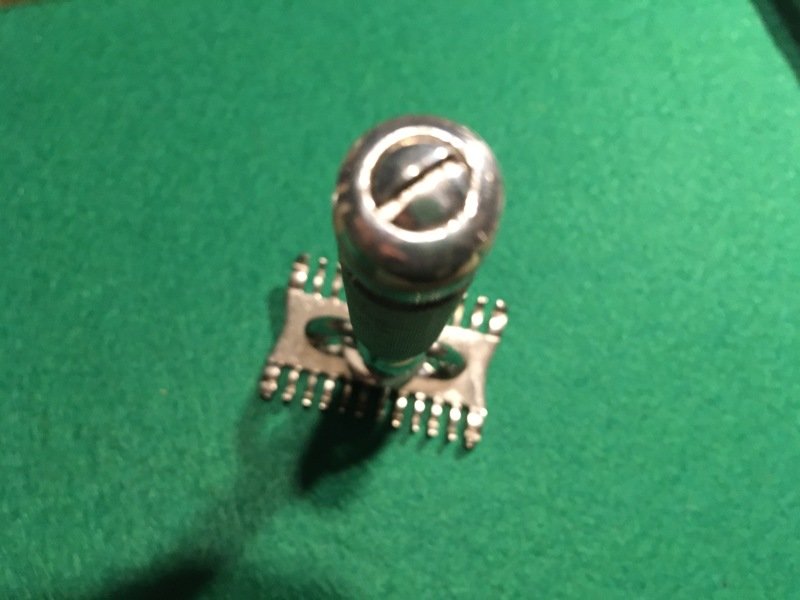 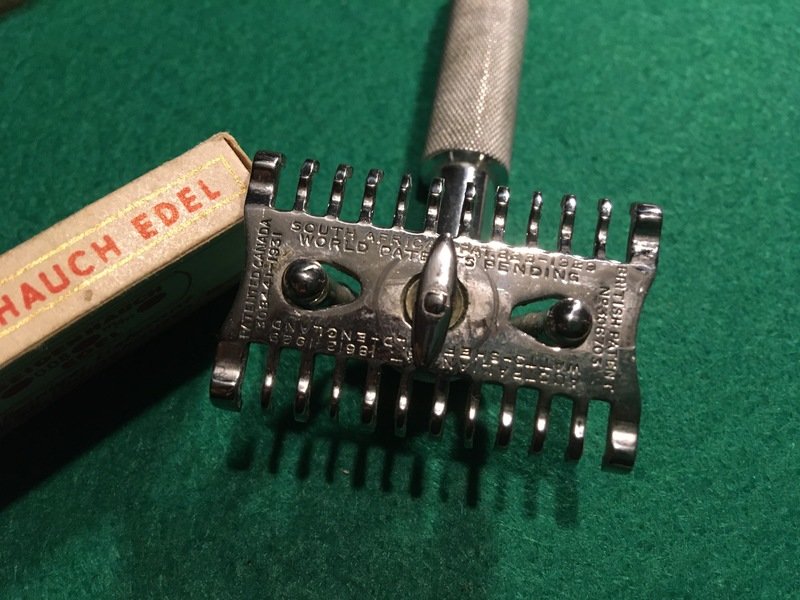 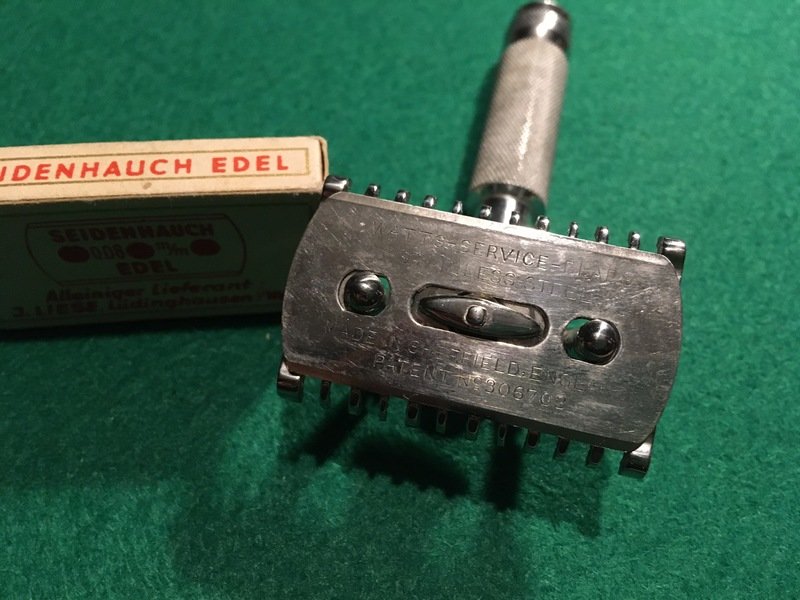 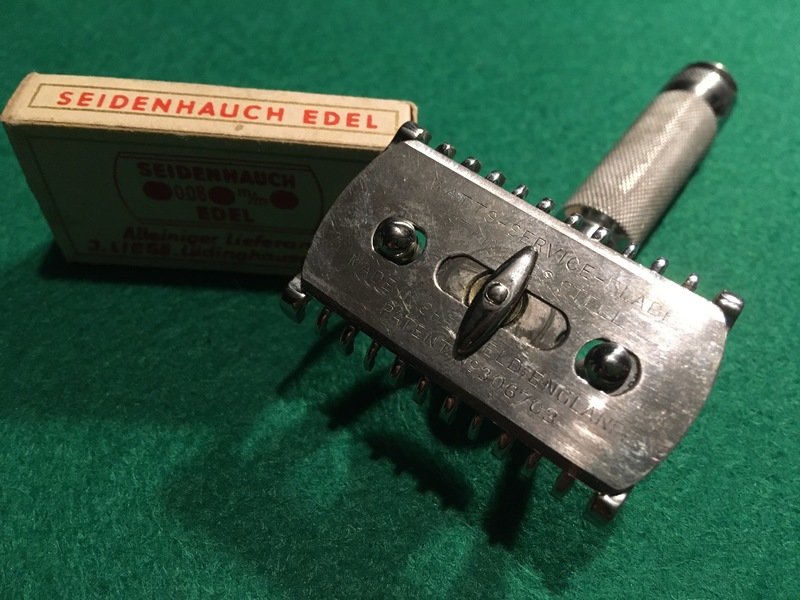 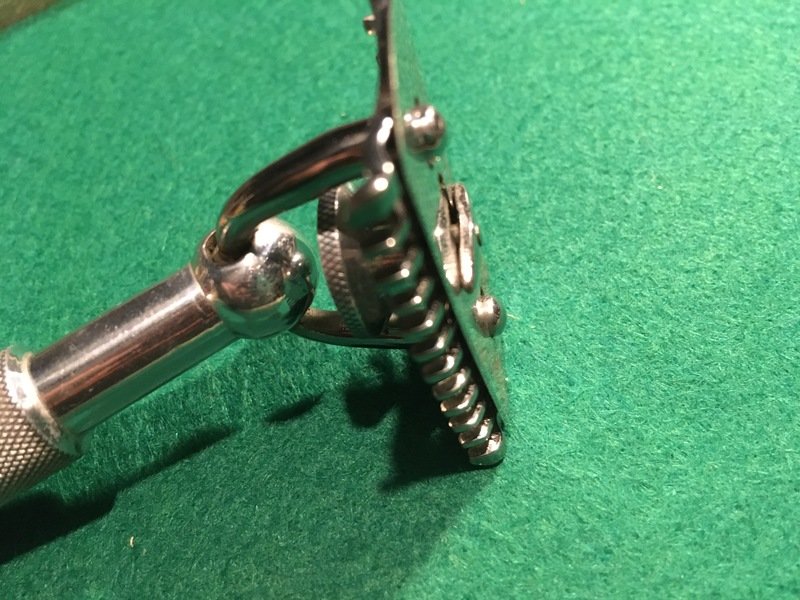 Thanks so much for this awesome in-depth description and picture documentation Richard, love it! This razor is indeed a quite unique beast. Here‘s mine in a smaller version case, I haven’t shaved with it yet but I know of people who have, even with modern blades. 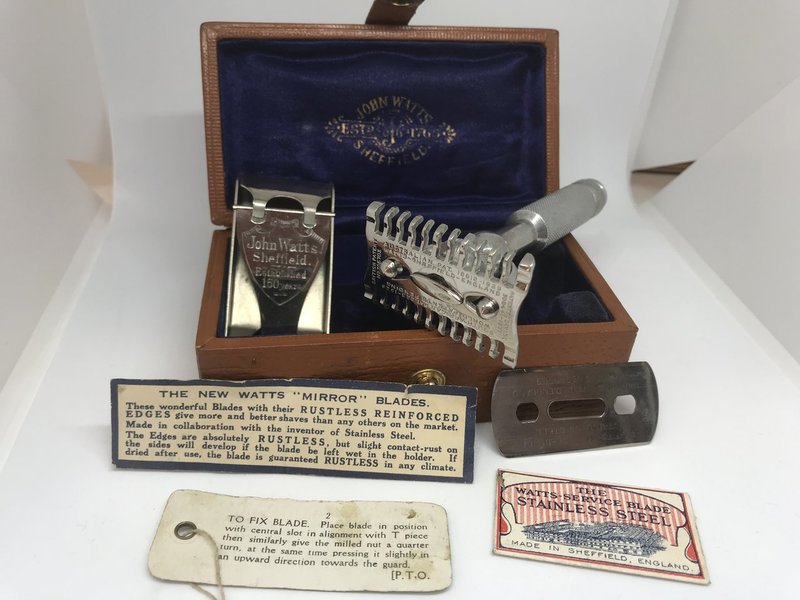 A capless razor with a tilting head - right up my street right now.
I had to have a close look at the patent:

Moderator
SU-Patron Gold
I knew I could rely on you to dig that up
Cheers!
Richard