Since a lot of us are playing with Coticules and lather these days, I like to share something I tried this morning.

I had a 7/8 Friodur that had a number of Coticule+water touch-ups on the counter, but was clearly in need of a more powerful treatment. Under the microscope its edge looked a bit worn, with the occasional microchip, and the lack of a crisp straightness. If you ever saw a worn, tired edge at 40X magnification, you know what I'm talking about.

I took the razor through a dilution phase on a La Dressante, but I didn't finish it on clear water. Probed with the HHT, it was violining like hell, but no popping whatsoever. I put the hair I used aside and did something ludicrous. I rinsed and dried the La Dressante, took a chunk of hard shaving soap, and rubbed it over the stone's surface, as if I was using a slurry stone. I did this dry, no water involved. I rubbed the stone with my hands, to further even out the coat of soap that was now present on the Coticule. Then I took the razor and performed 40 X-strokes (I counted them). It was completely awkward. The razor cut halfway through the coat of soap during the first passes. Soap was gunking up on the blade, right behind the edge. The draw was cantankerous and uneven. I hated it.

After I finished the 40 laps I cleaned most of the dry soap gunk of the edge and took the hair I'd put aside. I could sever it at 40mm from the holding point, and next I trimmed little pieces of about 2mm from the far end, all the way till I arrived at my fingers that were holding the hair. This is typically a result I get *after* the blade is stropped, and occasionally after a Unicot, but never at the end of Dilcuot. That usually only allows me to pop medium to thick hair at 10-15mm from the holding point. The Coticule + lather process I shared a couple days ago, yielded similar great HHT-scores, and I think it basically relies on the same principle. It aims to fill up the abrasive matrix (not sure that word applies here, but I can't think of something better right now) with something solid enough to support the edge, yet completely nonabrasive of its own. It seems to make a Coticule finer than it already is. Candle wax, perhaps, could work too, but that would be more hassle to clean off the stone. I have never been able to get significantly better results of a dry Coticule, hence I believe the coating must be accounted for something.

I rinsed the blade a bit better with hot water, dried it and gave it the normal stropping routine. HHT score was 4 to 5. The shave was excellent. I'm not saying it outperformed, but it was most certainly on par with everything I've come to expect of a perfectly succeeded Coticule edge. The edge was mellow while I'd normally get engaging results of this hone.
I left that La Dressante as it is, with the coat of soap on top, and I'll be using it for future edge finishing, to find out if I can copy these results and how long the soap treatment lasts. With some luck, the coat will thin out, offering a less awkward draw, while still retaining the improved keenness limit.

It's of course only one small success, with this particular variation of the lather experiments, but edges don't get sharp by accident, hence I think this idea is worth pursuing.

If one might venture to say, you are playing with controlling the abrasive profile of the stone, much like the roasting profile for coffee.

Slurry increases abrasion beyond what is available from surface protrusions. Dilutions reduce it. Lather and soap films moderate or cushion (latter more than the former) the available surface abrasion.

Bart, was the thickness of the coating of soap such that it can be easily removed, if you wanted to, or would it take many minutes of scrubbing to get clean?

As luck has it, I am due to hone a razor this very evening, I shall now of course be seeing how the hard soap coat (I use erasmic, great cream but the soap sucks) on my la vienette and see how the HHT is.

Thank you for posting this my friend, I shall report the result of the BOSS (Barts old-fashioned shaving soap) method in this thread

Bart, As you can guess I have access to hotel room keys and use them for numerous tasks. I think they are the same size as a normal credit card. The point is, they have a perfectly straight smooth edge that would seem to be perfect to even the soap layer on the coticule when it is applied. Hit it with the soap, squeegie it off with the credit card, and application should be a breeze. Kindest, Denny
p.s. With an edge that sharp off the stone, did you consider not stropping it?

I tried this with that Boker again. This time on my La Dressante.
Still no joy.
I used a stick of Palmolive.

So, I tried again on my La Nouvelle Veine.
Same trick...rub with Palmolive stick and 40 laps.
I wasn't surprised at the results given the type of hone I was using.
So this time, after wiping clean I lightly dampened the surface of the hone and gave it another rub down with the soap.
Added a little water and began with the X strokes. It wasn't long before I noticed a thin line of metal slurry forming in front of the blade.
Instead of carrying on in that manner, I decided to add a drop of water every 10 strokes until the razor was gliding nicely over the surface.
Cleaned the razor to test. And...a very good HHT 4!!!
That's the best ever result I've had off the La Nouvelle Veine.

Well I tried this tonight and had no success, started with quite a loud violin, then did the good rubbing of Erasmic, a good 60 laps later and the HHT didnt improve, I started all over and still the same result, so I ended up just finishing with 2 rubs of the slurry stone and dilute back down, then water as usual, still just a loud Violin!
Ever have one of those nights...lol

Its my guess the razor wasnt close enough, next time I will start on soap with a HHT 2 or so.

I must try again when I have had enough sleep the night before, oh and I guess I should really use a razor that I have experience honing too, oh well, sorry for not being my usual gleaming self, heres a pic: 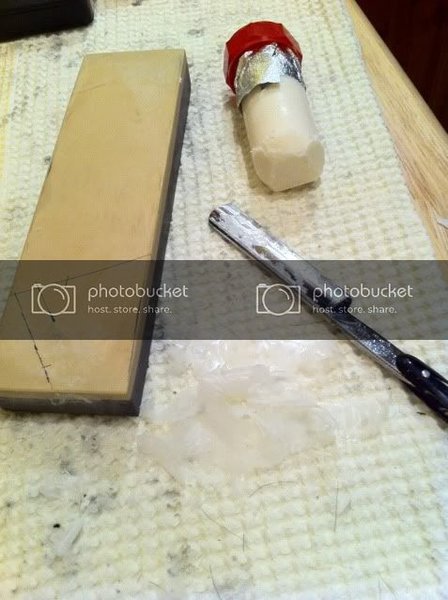 Dears. Trying on lather: Ragor J.A.hellberg eskiltuna Sweden. Hone La veinette.
I arrived until HH1. Did rubbing of palmolive stick .First pass was like barefoot on gravel.I washed the stone , i prepared a thick lather with the same soap ,was very smooth many times than water .Running 80 x strkes not allowing the lather dry. HH4. Excelent.
Emmanuel

When I tried the dry soap, the first 10 passes or so, shaved off soap like parmesan cheese..lol

Emmanuel, barefoot on gravel is an accurate description. I don't know how Bart did it on soap alone.
I don't doubt him, but I tried everything. I even tried honing on undiluted fairy liquid hoping it would be a smoother ride.

:
Which it was btw. Still no luck.

I think this place is driving me crazy.
At least I resisted the temptation of donating slurry.

You could try a thin coat of dish-washing liquid on the surface and allow to dry.

I am trying to remember who gave Chris shit about oil being cheating. When I do you're really gonna get it.

I do think the effect is very similar, and that the oil performs an identical function. I messed with both for a while, at times both in succession. I did find both the oil and the lather methods a bit of a pain. The lather needs to be made and dealt with, and the oil needed to be cleaned up after, but I surely did notice a big jump in keenness. It was pointed out to me that it might have been just a means of working around my lack of confidance, and forcing more strokes out of me, or something to that effect. I've since worked towards duplicating the same feel on the stone using water that I would get from the oil (or lather, as the case may be). I found that the oil seemed to do something to magnify the sense of feed-back that came from the stone and helped to really fine-tune my sense of it.

I gave this a shot tonight. Speick applied to a dry hone and then worked in with my palm to a nice sheen. 50 x-stokes gave little improvement, if any, over the previous HHT-3. I too found it quite difficult to control the razor and it sure felt might strange. I added a few drips of water to the hone and gave it another 50 x-strokes. The wet soap sure provided a nice slick surface to hone on, but the edge took a step back to HHT-2. I used a La Dressante which typically provides a more aggressive coticule edge when I can manage to get it right

i actauly like a drop of washing up liquid on the hone with water it provides wicked controll, same for lather ,only thing with lather it tends to lift blade and dry out quik. washing up liquid is a nice lubricant.
J

I like adding dish soap as well. I find it helps in keeping the water on the hone and provides a lot of slickness. I'm sure it reduces or slows down the polishing abilities of the stone though. I have to try oil on mine! What kind do you guys use? Mineral? baby oil? olive?

It seems no one had much luck copying my one-time success. I haven't tried it again myself, but soon I will, and I'll keep you posted.

As far as I'm concerned, there is no cheating in sharpening razors. Whatever gives you a good durable edge is they way to go. And the easier it can be obtained, the better. I have played a lot with extra lubrication (oil, detergent, lather etc) and written an
Please, Log in or Register to view URLs content!
, many months ago.
I chose lather, because I didn't find any difference between the various substances for lubrication, and lather seemed to me both safe and traditional.

With my latest lather experiments, it's the first time I have got (HHT)results that clearly surpass my expected (HHT)results for what I consider a successful finishing on water. I am talking about clearly observable differences, and I won't stop until I've unriddled a repeatable procedure to do it.

Thanks to all for trying and reporting back. I hope you didn't see this as an exercise in waisting time.