And its a beautiful looking thing

However, honing it is beyond me, see the photo's below and the contact area with 3 layers of tape on, this had me baffled for a while, and I did consider working it on the 400 grit and then repolishing and honing, but that commitment is beyond me at this time, 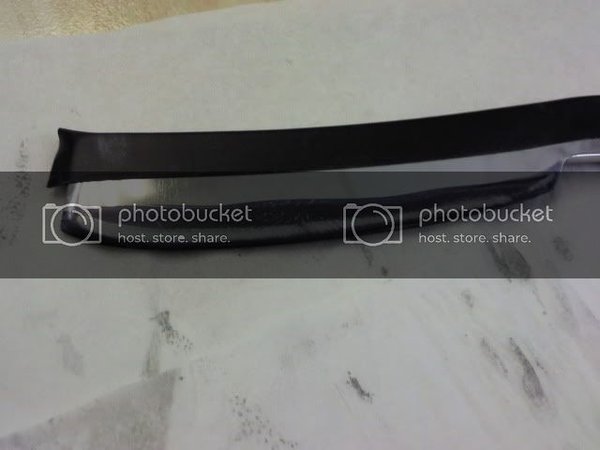 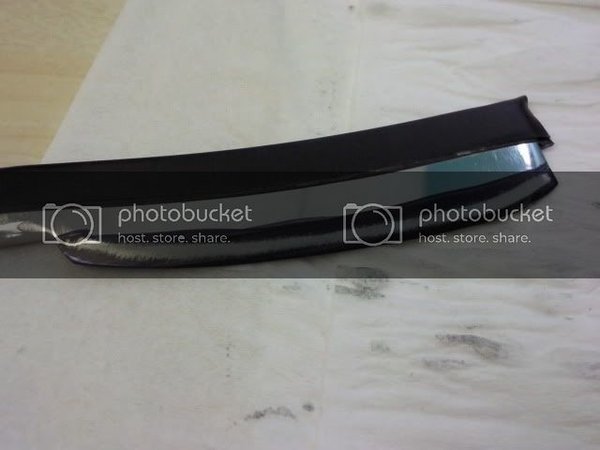 Whats doing it is the blade profile, its beyond a wedge, with a definite barrel out in the center of the blade 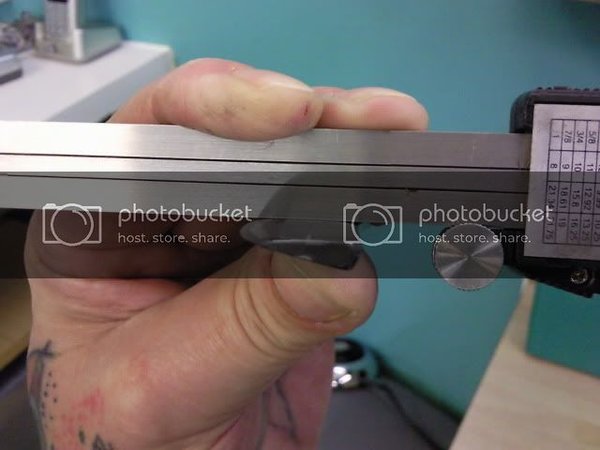 My only idea would be to lap it flat on the 400 grit then repolish and hone the now true wedge blade, alas again that kind of commitment is beyond me at this time, so its bad news for Torben although to be fair someone here may have a better plan, or Torben may be happy to spend the time it needs on the stones before a repolish and hone

What do you think guys??

Well Ralfy...same thing happend to me so thats why I gave it up! And your decription is very good,thats a barrel like type of wedge... So thats why I wondered how to hone it

Could this odd shape be the result of a previous owners honing attempts or is it designed like this?

At one point I actually considered taping a match at the middle of the blade..if you get my point? Offcourse this would not give it the right angle of the edge...

Or perhaps lapping it down to a true wedge is the only possibility...phewww...that will take some time!

But thanks for trying Ralfy!!!

If theres any clewer ideas around, please share them..
M

I'm not a hone master, but I can't see other options that those two:
1. Lapping the blade till it's a true wedge.
2. Glueing something to the spine on both sides so an angle on the edge is as desired (see Bart's angle calculator), hone the razor and dissolve the glue to get the clear blade again.

If I had the time or if it was mine I would lap it flat, just work it til I had enough and then try again the next evening, or even rough it out on the polisher using my magnetic alloy block to keep the heat down, and then onto the stones, but as you say it seems like a mammoth task,I believe there is a place that re-grinds Razors but I dont have the details?

I think a previous owner must have done this through some polishing or honing attempts? as I never heard of this sort of grind before, its hard to say, esp now the blade is (was!...lol)so well polished so I cant check hone wear etc.

I hope someone hear with more knowledge comes up with a good way round it??

Til then or if? what would you like me to do with the chubby ol'girl??

Yeah...did think about gluing ..something...to the spine and then hone it...

Wish I had gotten it a couple of years ago,at that time I had acces to prof. honing machinery that could hollow grind it.But thats in the past..

Now I`ve been thinking for a while (slow thinker)...
When the razor first arrived it had no spine wear at all and no edge either..
I honestly cant imagine anyone would take a considerable about of time, effort and hone wear to create the odd shaped profile.Nor any reason to do so.So it must have been made like this. A pre-wedge model?
Perhaps its not intended for use.. hmm..that doesnt sound right either. Anyone out there with a simular razor????

I bet you guys a
Please, Log in or Register to view URLs content!
that this razor has seen a sharpening atempt by a knife sharpener, who was unaware of the the razor honing rules.

That's why the razor carries the bevel of a knife. In essence, it is ruined. The only decent way to solve this, is regrinding. That also requires repolishing.
I have on two occasions regrind such a razor on a
Please, Log in or Register to view URLs content!
sharpening machine. It puts a near "wedgy" concave curve in the blade. The Tormek's wheel is about 220 grit (water cooled, so no loss of temper). After that the blade needs to be sanded and polished all the way up. If Torben thinks the razor is worth the effort, I'm willing to work on it, but without any guarantee that I can salvage the thing. Everyone with a Tormek can do this as well as I can. The razor needs to be put flat on the wheel, till the concave shape extends all the way to the edge. This needs to be done at both sides, working intermittenly, while keeping a close eye on symmetry.
This is actually a job for razormaker's tools and skills. But I can try.

That's what I make of this.

I am happy to send it off on its European tour, for Sir Barts attention.

That is quite an offer you are making to a stranger!!

I know you are a busy guy with plenty to do so I can not accept it...But thank you very very much for offering it,thats really something :thumbup:

And also : As I`m the stubborn type I want to prove you wrong in declaring it dead,hehehe...though I most likely will regret it latter.

To make it simple : Its a piece of steel. It needs to have steel removed.Lapping with different kind of items will remove steel. It takes time to remove steel. I have time. I have a range of hones and plenty of sanding paper(wet & dry).So steel will be removed over time

Could have done the work in around 5 minuttes.It hollows both sides at the same time and the hollowing is adjustable.

That grind is the way some Japanese are ground, yours is not this one, they are flat on the back (skin side) and hollow on the front, they are designed to be held in one hand for the entire shave

hmmm..so it`s crap.But I refuse to give up on a nearly 200 year old razor. The metal is hard and high carbon so time is all thats needed....

I would be very tempted to send it to Sir Bart, we are a very sharing bunch on here, and it will yield great results, or go your way and lap it flat, which is just what I would do if it were mine :thumbup: or a 3rd way would be to use a milling machine and slowly and gently machine it flat, then finish by hand. I think thats what I would try for then revert to the hone for the last mm or so

I know one guy who does that--he makes razors that are conVEX ground (just like that) and hones them freehand.

yeahh....thought about that as well..but then it wont get the right angle of the edge

Well its on its way back to you My friend, it is a beautiful looking old girl, just a little too chubby ..lol
M

It just came to my mind that getting the right angle on that blade may be simply impossible with it's current shape, no matter how big thing you'll glue to the spine.

Thanks my friend...I`ll try and put her on a strickt diet,it wont be easy,but she really needs to get in shape once again :thumbup:

Hope that someday I will be able to return the favour!

Have a nice day.

Yeahh..think you`re right..and it will be a bit difficult to hone with two tennis balls glued onto the spine

Marek ...Yeahh..think you`re right..and it will be a bit difficult to hone with two tennis balls glued onto the spine