An Intro to Japanese natural stones…

(If you already have your hone, feel free to skip this part.)

Japanese natural hones (天然砥石-tennen toishi) are widely considered among the world’s best stones to sharpen a wide variety of tools—including, naturally, straight razors. The stones found near Kyoto, especially, have been prized for their exceptional honing effects for hundreds of years. There are a large number of hone mines around Kyoto, all of them producing great stones, but in terms of price and quality the stones are divided into two large groups, “Eastern Things” (東物-Higashi Mono) and “Western Things” (西物-Nishimono), with the Eastern stones being the more expensive, and more highly regarded. These stones include the Nakayama, Oozuku, Narutaki, Shoubudani and Okudo. Nakayama, of course, is the most famous and highly regarded, but for our purposes (honing razors) Oozuku is also very good, and in fact any of the eastern stones should be sufficient.

However, when selecting a stone, it can be kind of difficult to know what to buy—there is a bewildering variety of stones available, and it is very hard to know the differences between them. Basically, for straight razors, you are looking for 2 things: a hard stone, and a fine one. MOST stones will be fine; all of the Eastern Things are considered “finishing” stones, meaning very fine, and frankly the variation between types (kiita, asagi, whatever) will be no greater than the differences between individual stones…meaning, don’t worry so much about the name, worry about the stone itself. Additionally, hardness is mostly an individual trait, but often kiita stones will be softer than Asagi stones, so that may help. However, the only real way to tell how a stone is going to work for your purposes is to try it out. Really. There is no other way.
You can buy a stone from someone with the same purposes, and trust their word, but it all comes down to experience with the stone. That being said, there is one external thing that can help in the selection of a stone for razors: the “Maruka” stamp ( ㋕正本山, arranged vertically in a rectangular frame). This is a brownish stamp (that may be VERY faded—it is OLD) on the small end of the hone. This stamp indicates
that the hone was tested by the original owner of the Nakayama mine (the Katou family) and deemed top quality. It should be very hard, very fine and pure, without damaging inclusions. If you can find an authentic Maruka stamped hone, the chances that you have a top quality hone are pretty darned high. As is the price…

Japanese finishing hones are often used as just that, a finishing hone. Meaning, they give a final polish to a razor at the end of a progression of coarse to fine stones. However, in studying Japanese sources, and in taking honing lessons from my Barber (a man who has been using Japanese waterstones to hone razors for nearly 40 years. Hones which, by the way, he has given me to use myself) not once has there been mention of using any coarser stone to hone a razor, neither a Japanese “Kamisori” nor a Western-style straight razor.
Instead, all honing is done on one hone, the Honzan （本山） using a progression of slurries. Thus, having the proper selection of Nagura and slurry stones is essentially as important as the honzan itself.

The main show. For more information, please see the big long intro above

Nagura are small, whitish/striped stones with a soft, chalky texture, sourced from a mountain near Mikawa city, in Aichi prefecture Japan. They are divided into a wide number of qualities, but for razors we are only concerned with 4 types: Botan, Tenjou, Mejiro and Koma.

The basic recommended set includes 1 Botan, 1 of EITHER Tenjou or Mejiro, and 1 Koma, but
Koma are getting more and more rare, and thus more and more expensive. If you don’t have a
Koma, it’s ok to skip it but having it makes the transition smoother.

Small form Honzan/Tomonagura:
This is a small piece of a finishing hone, like the main hone above. It should be of roughly the same hardness as your main stone. When he gave me his hones, my barber told me that the most important part was this stone…and after several months, I am finally understanding what he meant.

A microscope can help with examination of the bevel/edge, but it certainly isn’t necessary.

How to use your hone.

There are two basic steps to honing on Japanese hones. The initial sharpening, done with rough slurry, and the final honing/polishing, done on Honzan slurry.
First, let’s talk about the initial sharpening. This is done with a razor that won’t shave. It pulls or won’t cut hair, but it might “feel” sharp. This is NOT setting a bevel, as you might do when repairing a damaged razor. That work is best left to a rough stone like a DMT 1200 or even lower. The honing done here CAN be done after setting that bevel, though.

Here’s what we do.

Get your Honzan hone, your NAGURA, and lots of water. 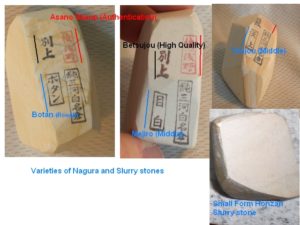 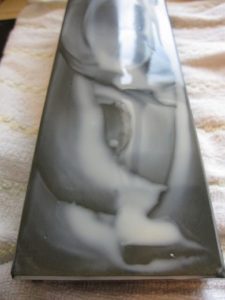 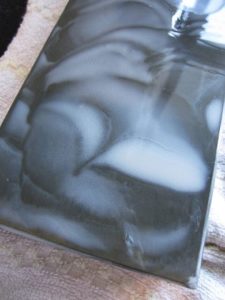 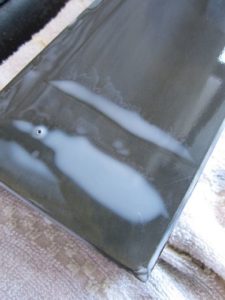